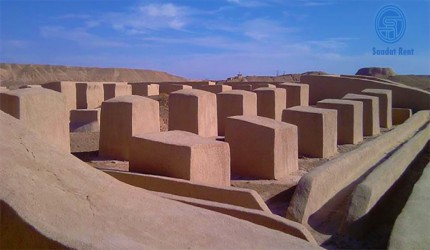 Dahaneh Gholaman Iran, a historical city of the Achaemenid period

The Dahaneh Gholaman is in fact the remains of a great city of Achaemenid times.

The city, buried beneath a massive mass of sandy sand, was first identified in 1339 and was explored during the years 1344-1441. This historical city has large public buildings, temples, residential neighborhoods, streets, waterways, military and industrial neighborhoods.

This city is the only ancient Achaemenid place that shows the sovereignty of Iran over the eastern part.

This city is important in many ways. On the one hand, the only city of Achaemenid Welsh clay is the one in which it is possible to clearly see the lives of ordinary people and their homes alongside buildings and massive public or state buildings.

Moreover, the Achaemenid city has not grown without planning, the construction of the city has been made with a plan of engineering and planning.

Archaeologists find that one of the main causes of the city's abandonment is the sudden drying up of the Hirmand River bed.

The special significance of this ancient city

One of the remarkable reasons for this city is the lack of or, in fact, the absence of antiquities from the Achaemenid cities that have not yet been achieved, Dahaneh Gholaman is the only city discovered since the Achaemenid era. The only ancient city of this time is that the engineers of that time first dragged the city map and then built the city. Here the traditional Achaemenid architecture is interwoven with the native architecture of Sistan.

Residential neighborhoods, large public buildings, the temple, the treasury of the city, the industrial and military district, which are located in an area of 100 hectares of this valuable area, represent the important position of the city of slum spans in the 5th and 6th centuries BC.

Here is one of the rarest archaeological sites in Iran's plateau, which provides useful information about the ritual of worship.

The Achaemenid official architecture, as well as how the local architecture and the impact of climate change are integrated into the city's architectural composition.

The remains of the slaves are the survivors of the city that once served as the political administrative center of Satrapi (Walineshin) Zarang (Zaranj) in the Achaemenid Empire. Explorations show that the city in its northwestern part has a rectangular sanctuary with four observation towers. In the Achaemenid inscriptions, Bisotun, Persepolis and the Naqsh e Rustam from this city called Zark or Zarankai.