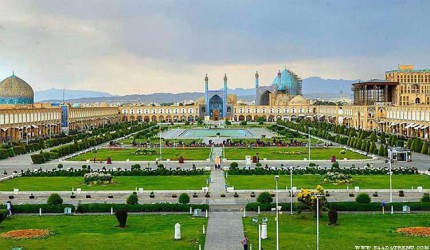 Naqshe-Jahan square is a large rectangular square in the city of Isfahan, which is surrounded by Safavid era buildings....

Naqshe-Jahan square is a large rectangular square in the city of Isfahan, which is surrounded by Safavid era buildings. this Square has been shaped in modern times during the reign of Shah Abbas Safavi. The monuments in the Naqsh-e Jahan Square include the Ali Qapu palace, Imam Mosque, Sheikh Lotfollah Mosque, and Qeysariyah bazaar and amazing Iran attractions. In addition to these buildings, two hundred chambers of two floors are located around the square, which is generally the place of supply of handicrafts in Isfahan.

Naqsh-e Jahan square represents the power of the Safavid government and represents the structure of urbanization during the Islamic era. On the four sides of this square, Imam mosque and Sheikh Lotfollah Mosque symbolize the importance of the Islamic religion in the Safavid Shia government. the existence of the Ali Qapu building, which was the residence of the Shah, indicates the government's supervision of the city and the life of the people, and the importance of the politics and Qeysariyeh market was a sign of the importance and position of the economy in this government, and the community of these four buildings, along with the three main principals of governance, of Shah Abbas, the king of powerful Safavid dynasty in capital of that time.

Naqshe-Jahan Square was registered on January 8, 1313, No. 102 in the National Iranian Book List, and in May 1358, No. 115 was one of the first Persian works that was registered as a UNESCO World Heritage Site.

Before the city of Isfahan was choosen as the capital of Safavid era, there was a vast garden in the area called " Naqshe-Jahan Square ". The garden was also the location of the state-owned buildings and the palace of the Timurid and Aghouyunlu rulers. At that time, the garden field section was called the "kushk door". This section is located on the western side of the square as today's Naqshe-Jahan square and at the site of the building of the Ali Qapu palace.

From the beginning of the reign of Shah Abbas I, the surface of Naqsh-e Jahan square is much larger than the former Kushk Square and many times the ceremonies of lightning and fireworks have been set up. Professor Mohammad Reza and Professor Ali Akbar Esfahani, the name of two architects who plan the square and built it in the current form.

In general, this type of field design, named after the Iranian square, is a link from the market, the government center and the religious site (mosque), before Naqshe-Jahan Square in Isfahan in the old field, or the same as the main field pattern Naqshe-Jahan Square and the oldest example of this kind of field is in Yazd in Amir Chakhmaq Square, in Qazvin, Shah Square, and Tabriz in Saheb Abad Square.

In the following, we'll mention some of the attractions that are on the square and you can visit them.

Ali Qapu Palace is located in the west of the Naqsh-e-Jahan Square, facing the Sheikh Lotfollah Mosque in the city center of Isfahan. Ali Qapu Palace is one of the most important architectural masterpieces of the early 11th century and has a world renown. The mansion is 48 meters high and has 6 floors with spiral staircases.

On the south side of Naqsh-e Jahan square there are domes and minarets that belong to the Isfahan Imam mosque. The most important historical mosque in Isfahan is one of the most important buildings of Islamic architecture in Iran. This building is a unique masterpiece of architecture, tile and carpentry in the 11th century AH which its construction began in the year 1020 AH, under the command of Shah Abbas the Great, in the twenty-fourth year of his reign.

The architect of this building was Professor Ali Akbar Isfahani and his supervisor of the building was Mohab al-Bikallah. His calligrapher, such as Alireza Abbasi, Abdul Baghchi Tabrizi, Mohammad Reza Emami and Mohammad Saleh Emami, have done their sculptures.

of course, there are many other attractions in this area, where we suggest you visit them closely and travel to Isfahan to experience unforgettable memories.