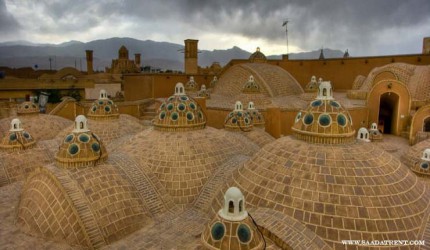 Sultan Amir Ahmad bathhouse is one of the most beautiful baths in Kashan, with its unique architecture and interior deco...

Sultan Amir Ahmad bathhouse is one of the most beautiful baths in Kashan, with its unique architecture and interior decoration. This bath that also known as Qasemi bath along with the Fin garden and bath, is one of the historical and tourism attractions of Kashan. This historical bath, whose name is from the Imam Javad's grandson holy shrine next to it, is a unique example of Iranian baths.

This bath also has been listed on the national monuments list of Iran tourism attraction. Sultan Amir Ahmad bathhouse are among the magnificent works that have been praised by both domestic and foreign tourists during the Safavid period.

History of Bathhouses in Iran

In the past, each city has five main elements, including mosques, bazaar, houses, baths and water storage, and therefore, Sultan Amir Ahmad bathhouse in Kashan is considered as one of the most important elements of the city. According to the texts of the various historical periods, in all Islamic periods, there were many public baths in cities, which were comparable in terms of numbers and importance to mosques.

The bath in the old days was not used just for bathing, they were also a place to spend leisure time, talk and exchange, fatigue and even worship, gather friends and resolve life's problems, that’s the reason of vast amount of Sarbineh, which we will talk about later, in the Sultan Amir Ahmad bathhouse.

The evidence obtained from this bathroom attributes its background to the Seljuk dynasty, but the "Sarbineh" of bath, is from Qajar era. Actually the remains of the devastating earthquake in 1150 SH shows the history of the bath belongs to the Seljuk period, while the construction of Sarbineh says something else. Some believe that the current bath was built in Qajar era, in 1292 AH on old bathhouse and also added a small bathroom to its collection.

The bathes are considered to be the most complex of buildings because of the principles should be followed in its construction. They should build this building lower than the surface of the earth and within the soil to maintain inner heat and save energy.

Sultan Amir Ahmad bathhouse has very eye-catching decorations and is considered as a unique bath. The lime and gypsum plaster of this building stare everyone's eyes. Lime cutting, the art of sculpture, embossed on a surface of lime, is one of the most beautiful decorations of Iranian buildings.

17 luminous layers that have been identified in this building, shows its antiquity.

Turquoise blue and golden tiles, seven layers of plaster and special architecture, have made this bathroom one of the most prominent baths in Iran. Other features of this bath include the use of vaulted ceilings, eye-catching mosaics and wall paintings that have been designed to create special effects.

For water supply two wells were use and for transferring water between different parts of the bathroom, tannins or pottery were used, and colored glass called "Goljam" is seen in the hole of the roof or the bathroom wall.

In general, the Sultan Amir Ahmad bathhouse consists of two small and large baths that used to be used by the residents of Kashan in the past and at certain times of the week that we name parts of this bath for you:

The first room of the bathroom, Sarbineh, was the dressing room and the place to prepare for bathing or leaving the bathroom, Bineh or Sarbineh is the most important and beautiful part of bathroom.

a spacious and decorated space with large domes and ponds in the middle and around there, are platforms for visitors to rest and for entering there, they should climb a few steps and wash their legs before entering the pools on the platforms.

most of the bathroom decorations are always in the Sarbineh. The floor of the bine and the surrounding pavilions are usually from stone. Regular lighting adds to the effect of these decorations. The pond inside the Sarbineh and its fountains make the atmosphere more relaxed.

The second room in the bath is the warm house, where it was the place for taking shower. Garm Khane or warm house is often a simpler space than bineh that has corners to sit and wash. Hot and cold water pond and more private spaces are available for bathing in the vicinity of the warm house.

The lighting of Garm khaneh was provided from ceiling lighting. There are skylights with lens-like glasses, that let enough light to enter the bathroom and also in the bath become unseen by kids.

The bath roof and goljam

The roof of this bathroom is one of the symbolic places of Kashan and the subject of many photographers. Some domes are placed on this roof, each with luminous convex lens glasses to give enough light to the various parts of the bathroom and prevent it from seeing inside of it. The old people believed that the devil's eyes looked into the bathroom.

The interior light of the spaces is provided by Goljam or directly from the ceiling of the bathroom, which today artificial light are added too. These glass elements are all over the roof and provide bathroom lighting throughout the year.

The number of glasses in Goljam is based on the area of the bath and the diameter of them and their number is determined depending on the heat and coldness of the space below them. In some seasons, the temperature and humidity of air of the Sarbineh was adjusted by removing the Goljam.

In the old days, roof of baths was a place to dry clothes and towels, so there was a stairway to access there.