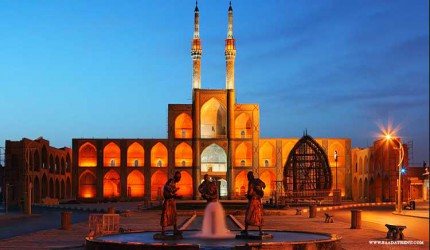 Amir Chakhmaq complex is one of the most prominent historical buildings in Yazd, in the middle of the old format of Yazd...

The inhabitants and guests of this city come together in this field to drown in its beauties, and along with the dance of the fountains, they will observe part of the history of this ancient land. So do not miss it in our Iran travel blog.

In the city of Yazd, places like Tekyeh and Hosseinieh are mostly in the centers of neighborhoods and along with other elements such as the mosque, market, caravanserai, bath, water storage, etc. which the Amir Chakhmaq complex is not an exception from the others and follows this structural pattern.

In the 8th century, the ruler of the of Yazd, Amir Jalaluddin Chakhmaq decides to build a collection of mosques, markets, and more in this part of the city for the further prosperity of Yazd. This square, which is considered the symbol of Yazd, is located along the Salman-Farsi street and its route is suitable for driving car, so you can use the car rental in Iran services in this city.

This square was famous with the same name in the Safavid era. During the reign of Shah Abbas, some of Amir Chakhmaq complex works have been revived. Early in the thirteenth century, the square in front of the mosque and market hall has become Hosseiniyeh. Of course, what is certain at that time, this place does not have the role of Hosseiniyeh, since such places have been prevalent in Iran since Safavid times.

Amir Chakhmaq complex was converted into a cemetery during the Qajar period. But in Pahlavi area, they stopped it and with the demolition of the graves, it again became its first form, which was the square.

Recently, Amir Chakhmaq complex facade with the cupreous dash and sculptures has become more attractive and magnificent. In the corner of this square you can see a big palm that has been in this place since Safavid dynasty and is used in the ceremony of Muharram one of the most important ceremonies in Iranian culture.

On the southern side of this square, the Amir Chakhmaq mosque was built in 841 AH. The beauty and magnitude of this mosque is so much that is the second most important mosque in Yazd.

The dome of the mosque is curved and cracked, covered with green tiles and surrounded by an inscription in Kofi handwriting.

In the Pahlavi era, with the construction of Shah's street, the Haji Qanbar market of Yazd, which forms the backbone of the old city of Yazd, is divided into two parts, and some of its parts were destroyed.

To this historic market, you will feel the rectangular section of the northern part quite different from the other parts. Most of the goods sold in Amir Chakhmaq complex market are fabrics, Yazdi sweets and cookies that are one of the most deliciousIranian souvenirs, gold and carpets.

Amir Chakhmaq Cistern building date, backs to the Safavid period, that is located next to the Haji Qanbar market.

This square had three water houses, which today only two remain.

This place is in fact a place with so many booths that people gather in during mourning ceremonies. In the thirteenth century, it was built with two large minarets on the market.

one thing that attracts everyone's attention in Amir Chakhmaq complex, it's a large palm tree that is beside Amir Chakhmaq Tekyeh.

Also known as "Nakhl-e heidariha". This palm, which is a symbol of Imam Hussein's coffin, is one of the oldest palms of Yazd province with 8.5 meters' height and has been there since 1229 AH.