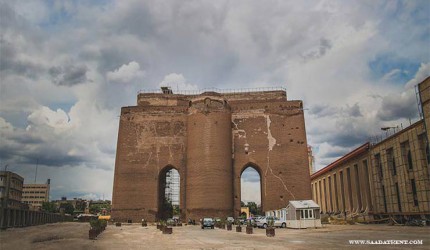 Arg Ali shah of Tabriz is 700-year-old symbol of city, one of the oldest historical iran attractions and also one of the...

Arg Ali shah of Tabriz is 700-year-old symbol of city, one of the oldest historical Iran tourism attractions and also one of the most important sights in Tabriz. According to quotations and notes of historical tourists, this citadel was the only high-rise building which was visible from long distance.

This complex was originally built as a massive mosque. As time passed, the city's earthquakes (about 40 earthquakes) and also wars were largely destroyed it. At present, the only remaining part of this building is a high wall called the arg of Tabriz or Alishah arg.

In other words, this wall is the only part of the vast walls and alter in the south yard of this mosque, which is a witness to the magnificence and development of this unique monument that only a few pictures are left behind from it.

The construction of this magnificent citadel was initiated by Ali Shah, Minister of the Mongolian Ilkhan, with the goal of building a large tomb in the courtyard of the mosque. According to historians, the southern part of the mosque has a large arch, and in history it has been mentioned that Alishah asked architects to build this citadel 4 times larger than the size of the Taq Kasra.

Although its arc has been broken and collapsed because of its material and hurry for completion of its construction. On the other hand, AliShah's death also was one of the reasons that stop the construction of the building at that time.

With a quick look at the story of Arg Ali shah of Tabriz, it can be seen that it is a valuable memorial from natural damages and historical events of the past, and despite them, it has always been a solid and dominant stumbling block of Tabriz.

Also, this collection had different uses, due to the characteristics of each dynasty. For example, During the reign of Qajar, this mosque and its area were turned into a grain and military ammunition warehouse, and thus, a fence was draped away, and that's why its name changed to arg.

Indeed, with the onset of the Iran-Russia wars in 1824-1804 and the Iran-British War in 1857, the Ali shah arg of Tabriz became military citadel and under the command of Abbas Mirza, the crown prince of Qajar, two important military institutions were built in its area. In addition, during the Qajar period, a mansion was built there too.

In 1290 AH with Tabriz defeat and its occupation, the Russian forces closed the Arg Ali shah of Tabriz and built other buildings such as the Nejat School, one of the first Iranian modern schools, and the theater as we mentioned, that their examples were only in St. Petersburg.

In the years prior to the revolution, the area of ​​the Arg Ali shah of Tabriz was transformed into a national gardens and public parks and now is used as an ancient work amphibious area. Today, its area is used to hold Friday prayers and Tabriz's great mosque has been built in this place and it will take only minutes of your Iran tour to visit.

Arg Ali shah of Tabriz building is one of the masterpieces of Iranian art architecture that its magnificence in Iranian architecture art. This building architectural style of is according to the views of Professor Pirnia was in Azari style. It is an Iranian architecture style after Islam which is attributed to Azerbaijan and also called Iranian-Mongolian style, which became popular in Iran during the rule of Ilkhanate.

Due to numerous destruction and damage, there is no definite picture about the original and complete form of the collection, but this massive building is described in most travelogues as well as by credible historians such as Ibn Battuta.

From the information and descriptions mentioned in these books and documents it can be seen that at the time of Ali shah, the mosque was considered as central mosque and was decorated with tiles and stone pillars and marble columns and crafts and beautiful gilding that was later destroyed.

Best time to visit: 4 season in morning or afternoon