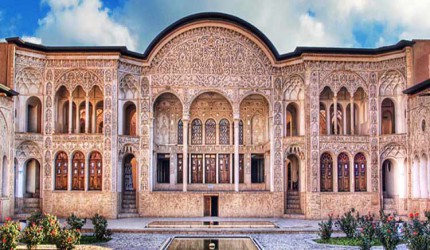 In Iranian architecture, despite the important features such as the proportion and beauty of the doors, domes, and porches, the most desirable aspect is the gem of iranian architecture and its mathematical and mystical logic that everybody should pay attention to it.

Before the construction of Persepolis, hundreds of porches and niches were constructed with wooden columns and stones all over the civilized world of that day, but first we find in the Persepolis that the columns are as far apart as possible, although in some out of the ancient temples outside Iran the distance between the two columns is slightly smaller than their diameter.

Architecture in Iran has more than 6,000 years of history. This architecture not only extends beyond the geographical boundaries of Iran today but also in terms of diversity, encompasses a wide area. In the following, we are going to introduce you to 4 architecture landmarks in Iran that have an important effect on iran tourism and you should visit them at least once in your life.

Iranian architecture attractions you must visit

Persepolis is a collection of magnificent palaces that its construction begins in 512 BC and it takes 150 years. Persepolis is located in a vast area that is surrounded on the one hand to Mehr Mountain and on the other side of Marvdasht. These royal palaces are built alongside the Parse city, which the Greeks have called Persepolis.

The Achaemenid architecture is a combination of art that has been adapted from the architectural style of Babylonia, Assyria and Egypt, and the Greek cities of Asia Minor and the Urartu, and has created an independent form of architecture with the art and spirit of the Iranian soul. By creating this huge building, the Achaemenids wanted to show the greatness of the Achaemenid kingdom to the world.

Read more about this Palace: Read this article before visiting Persepolis in Shiraz

In the time of Safavid, Naqsh-e Jahan square was built in a place where the great garden called the Naqsh-e Jahan was in that place. During the reign of Shah Abbas I and his successors, many games and matches were held in this field, such as polo, or different events, rituals, and shows. The two gates of polo rock that still remain in the north and south of this field as the memorial of that era.

Naqsh-e Jahan square is surrounded by magnificent buildings such as the Sheikh Lotfollah Mosque, Imam Mosque, Ali Qapu, and Qaiserieh gate, each of which is a spectacular example of the architecture of the Safavid era. These square and other monuments surrounding it are the creative effects of the hands of the artists and well-known Iranian architects.

A French traveler who visited the Naqsh-e Jahan square in 1298 AD, Dave Lafova writes: "I do not need to try to solve an important problem like the Greek Pythagorean, but it is quite revealing for me, and I can say with absolute certainty. In today's civilized society, there are no buildings that can be compared to the Naqsh-e Jahan square in terms of the breadth and beauty of its buildings. This is not my opinion; other European people who specialize in architecture and engineering agree with my opinion.

Soltanieh Dome, along with great works such as Persepolis, Arg-e Bam, Naqsh-e Jahan square, is among the Iranian attractions listed on the UNESCO World Heritage list that you must visit in your iran tour. The largest historic dome in Iran and the world's largest brick dome. Soltanieh dome is surprisingly unique in every respect, but it seems to have inspired it from the Tomb of Sultan Sanjar in Marv, with the difference that the Tomb of the Sultan is a square shape, while Soltanieh is eight side shape.

This dome was so famous during its time, that 100 years after its construction, the dome of Santa Maria del Fiora in Florence had been built inspired by it. The main color in the decoration of Soltanieh dome is the light blue, the sky blue to the turquoise and even the blue-green in its entirety. The building has 3 main doors in the input that is now blocked. It also connects 8 spiral staircases. There are four large windows above the four main porches of the building.

Nasir ol-Molk mosque is considered to be the most valuable mosque in Iran and so unique especially in its tilework and mogharnas. In the building of this mosque, they used colored glasses for windows. Therefore, it is also called the pink mosque in Iran. The main entrance of the mosque is decorated from seven-colored tiles with many decorations from the roses and the lilies of the valley of Shiraz.

Nasir ol-Molk Mosque columns are one of the most popular columns of historic places in Shiraz, which starts with a series of pots. This place has a 6-pillar column with two vaulted ceilings covering the roof. The body of the mosque is mostly made from brick, but the architect has brought tile works to avoid the uniformity of the wall. Nasir al-Molk Mosque is an example of Iranian architecture in the Qajar era, which shines like a jeweled, after which the religious architecture declined.

Tabriz was a large business center due to its strategic location on the Silk Road over time, and its bazaar is one of the oldest parts of the Middle East. Although its construction has begun more than a thousand years, its main construction belongs to the 15th century and starts at that time.

Each set of this red brick bazaar brings a different product to you. From gold and jewelry to the market for carpets and spices in this collection.

Iranian architectural styles are very broad and own the style of the world. Other features of Irania...

Get acquainted with the masterpiece of Iranian architecture Sheikh Safi al-Din Khānegāh and Shrine...

A traditional Pond model in the courtyard of Iranian homes

A traditional Pond model in the courtyard of Iranian homes