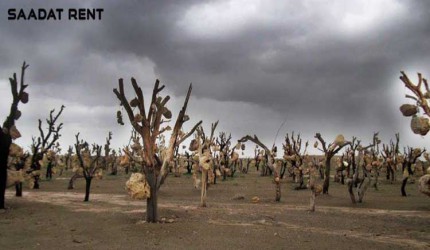 Mysterious places in Iran Adventurers are always looking to discover new and exciting things, and for them to go to hor...

Adventurers are always looking to discover new and exciting things, and for them to go to horror scenes can be one of the most attractive parts of their journey. With mountains, deserts and massive forests, Iran has a number of scary and insidious places that have strange stories in each of them.

We want to introduce you to some mysterious and unknown places as iran tourism destinations. Stay with us.

Rig-e Jenn or Bermuda Triangle of Iran is the most amazing, most mysterious and scary area in Iran, with its marvelous swamps bringing death to any living creature. Many unanswered and unexplained Happenings occurred in this area, and the salt marshes of this area have been the site of the murder and burial of many living creatures.

Rig-e Jenn desert is located in the southwest and west of central desert of Iran, south of Semnan. There are no fountains or water wells in this area. The lack of water resources in the vast expanse of Rig-e Jenn along with the presence of natural obstacles such as salt marshes and high sand dunes are factors that have kept this area away from human access for centuries.

This region does not have vegetation and animals, and so far, no report has been provided on the animals that are likely to live here. The widespread sands of this area and its marshes scare every human being. If someone travels to this area without the necessary equipment, he will be caught in desert mud and will join those who have disappeared in this desert.

The old people believed that this land was damned was the base of devils and evil spirits. The people living around the desert are on the same opinion that if anyone enters Rig-e Jenn, he’ll disappear and is sent from the ghosts and supernatural beings to the heart of this desert! One explorer says that even camels in the desert do not stand and just move when they reach this area.

Although the spell of the Bermuda triangle of Iran was defeated 10 years ago, and Ali Parsa, an Iranian adventurer after a few failed attempts, eventually managed to pass through this horrible desert.
Watching and exploring this area can be of interest to tourists whose purpose of travel is nothing but recreation but as iran travel tips, don't forget the necessary equipment.

The valley of stars; where the ghosts live

Qeshm Island, apart from all its amazing beauties with narratives and tales of the indigenous people of the area, has stories that double the attractiveness of many of these attractions, one of which is the Valley of stars. This valley is one of the Geo parks of the island that is located five kilometers south of Qeshm and after the village of Berke Khalaf.

Many strange stories about this valley, which look like a ruined building with corridors and gaps and holes, are narrated so that the locals don’t go into this valley when the sky becomes dark and usually, dissuade strangers to go to the valley in the darkness of night and they say: "Goblins and ghosts have come around here in the night."

according to inhabitants in the Valley of stars, a star has fallen down and blown up a piece of land, and the gigantic wonders of this valley are due to the collision of that star!

Stay at this point of the island after sunset is also disturbing to some because they think that the extraterrestrials will come together in the valley with the silence of the night.

However, the valley of stars is a place for enthusiastic celestial phenomena that, at night, can observe celestial objects and phenomena far from the ghosts that are crossing from the roofs of statues. Read more about this valley: Valley of Stars

The Sarborj forest; a forest that screams

Near Mashhad at the beginning of the Sarborj village, a rainforest can be seen that as long as the sun is shining in the day, this forest wasn’t different from other forests, but as soon as the darkness of the night comes, the scary sounds that are like terrible screams can be heard from the forest.

Some residents of this area, say that this frightening sound is from the locusts that in this area have flooded and refuge to trees at night, others say unknown factors such as climate, is the cause of this sound. It's interesting to know that these sounds are heard only from a few years ago and they are not heard before.

This area is located in a valley that a river cross through it. This river was dry every year in one season but since the year 1390 SH, when the time that these sounds are heard from the forest, water continues to flow there. and this has caused people's attention and consequently scares them from this phenomenon. for those wanting a travel experience with fear and the adrenal secretion, camping is a good option for them in this iran ecotourism destination.

A wetland that is called Ghost lake

A lake is located 12 km from Noshahr in Mazandaran province, which has been named by a strange and scary name due to its history in the old days. The combination of the dead trees in the middle of the lake and the fog that most of the time covers the lake with the sound of the wildlife of that area, all make your dream of fantasy and scary films, and these features made the name of the lake dubbed "Ghost wetland".

People around the lake have not seen anything from the ghosts, but they believe that past residents would have chosen this name for this lake according to some reasons.

If you miss experiencing excitement and adventure, we recommend to pack your clothes and take an iran tour to travel to this mysterious and magnificent lake.

A Lake with a Treasure from ancient times

This beautiful, mysterious and dangerous lake, called "Takht-e-Soleyman", is located in the West Azerbaijan province, which is one of the most popular and secretive places of popular tourist attractions in Iran. According to the local people, this lake was created when the prophet Solomon knocked his stick on the earth of that and an ancient treasure is hidden in the depths of this lake.

A treasure that during various periods has led a lot of brave and adventurous people to the lake to explore, and the lake has swallowed them all and even their bodies have been never found. There are a lot of other local stories and beliefs about this lake. Other people also believe that the lake is the birthplace of Zoroastrian Prophet.

Another myth of the lake is that Cyrus the Great, after winning the legendary King Crusoe, the king of Lydia, poured out all his treasures and valuables as a vow in this lake, and after that, the inhabitants of this area always sacrificed their booty and valuable property as the vengeance of this lake.

You can't believe these forests are in Iran

Packing list for a camping For all people who love nature and want to experience camping overnight,...