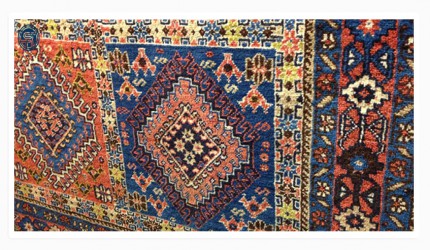 About the Iranian handicraft; Gabe In the articles of iran tourism, this time we went to Gabe art. Art to the extent of...

About the Iranian handicraft; Gabe

In the articles of Iran tourism, this time we went to Gabe art. Art to the extent of Iranian women’s dream.

Gabe is an iranian carpet made that is usually woven in small sizes by the tribes of Lor and Qashqai also Gabe is woven in different provinces of Iran such as Bushehr. Gabe is another type of carpet that has long pile. These pile sometimes reach a centimeter Which has a great impact on its smoothness. Early in Gabe, they were woven plain and without map.

What are Gabe plans?

The weavers were often inspired by the surrounding nature and used their mental designs on this. Sometimes his wishes are displayed on this. Like the role of a tent, which may mean fixed home, or the role of man as a family and other roles, each with its own symbol. Gabbe has handcrafts with authenticity and the paintings used in it make it different from other handcrafts.

The important feature of Gabe

The important feature of Gabe is its design and execution, which the weaver uses to create a different role on his woven using his own emotions and imagination, with complete and unconstrained freedom.

Where you can find Gabe in Iran?

The main centers of Gabe tissue are nomadic and rural areas of the provinces of Fars, Kohgeloye and Boyer Ahmad, Bushehr and Khuzestan. The city of Shiraz has been registered as the city of Gabe in Global registration.

French brand Givenchy uses the Iranian goblet for dresses in Paris Fashion Week in 2015. Riccardo Tisci, the senior designer at Givenchy, has used the role of Iranian Gabe in his designs.

Do you agree that seeing anonymous but fascinating places in different cities and countries makes a...