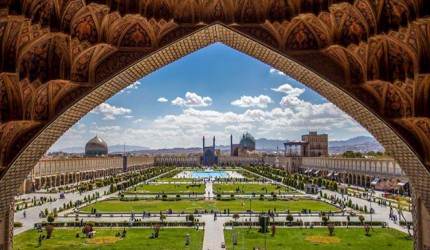 Naqsh-e Jahan square is one of the most fascination iran tourism attractions that after Persepolis is the most popular attraction in Iran. Actually, it is impossible if you travel to Iran and not visit this square and its surrounding buildings.

Naqsh-e Jahan square attracts everyone like Hindi witches and not only Isfahan people, it catches everyone eyes. The square that we're going to visit is one the registered attractions in UNESCO world heritage site and that adds to its value. So, pack your clothes and get ready for a fascinating tour to the biggest square in Iran, in a city that is called the half of the world.

Where is Naqsh-e Jahan square?

Naqsh-e Jahan square is exactly is located in the center of the Isfahan city. When you go from the Imam Hussein square that is also known as Darvazeh Dowlat to the Ostandari (Provincial Government) Street, you can enter to the passing the back of the Matbakh, a pass that is located on the west side of the Square and led us to the most amazing and also the second biggest square in the world. A view of Imam mosque’s minarets will catch your eyes when you are passing that way through Naqsh-e Jahan square or Imam square that comes up more than before when you’re becoming closer and closer to the square.

The entrance of Naqsh-e Jahan square

The entrance of the Naqsh-e Jahan square begins with the chambers and stores of the grand bazaar of Isfahan. The first thing that attracts every tourists’ attention in their iran tour, after entering the square is the greatness of Naqsh-e Jahan square and Imam mosque that is also called Jameh Abbasi mosque.

As we walk through, you can see different stores and iranian handicrafts shops, from Khatam, Qalamzan, Qalamkar, traditional bags, and even traditional clothes are available in these stores, but the beauty of the Abbasi mosque does not allow anything to be the center of attention.

For visiting this mosque, you just need to walk about 100 meters through the north part of the square to arrive at an entrance. A mosque with four minarets and an amazing dome that everyday tourists from around the world sing under it with every language and accent to hear the repeat of their voice seven times, and all appear from European and Asian, Arabic, American or Japanese the shine of happiness emerge in their eyes.

This mosque, the architectural representation of the Safavid era, is one of the most symmetry mosques in the world, that everything on its eastern side definitely is visible on its western side. This is only a part of the wonders of this mosque, and only a small part of the rectangular Naqsh-e Jahan square with 507 meters long and 158 meters wide.

In the western part of Naqsh-e Jahan square, this time, the majestic glow of iranian architecture, the Ali Qapu, which is closer to the center of the square than the rest of the monuments, is attracting passengers. A work of art that draws its wonders from the perspective of any viewer.

Ali Qapu palace has three floors from its sides view, two floors from the front view and four floors if you look at it from the back of the building and in fact six floors. This amazing mansion was the place where Shah Abbas watched the Polo games or the Buying and selling process by people. The porch which Shah Abbas visited the square, had a dock with a fountain, which for many years has been the question among experts that how water had been pumped to that height.

These days, Ali Qapu have been unbounded from the metal scaffolding, and its porch shows its glory more than the past. On the sixth floor of this mansion, there is a music hall, which has a unique architectural appearance and is also a good place to play music. It is said that Echo sound was heard from the hall into parts of the square, which requires more specialized reviews. But what's important is the Ali Qapu, which is also referred to as the symbol of power or force in the Naqsh-e Jahan square.

In front of the Ali Qapu is a mosque that has a nice colorful dome and, but it doesn’t have minarets on it. This mosque due to its femininity didn’t need a minaret, henceforth it is referred to as a mosque without minarets. Sheikh Lotfollah is the main name of this mosque. This mosque is located on the eastern side of the Naqsh-e Jahan square and its outer walls are also eye-catching.

Sheikh Lotfollah Mosque makes everyone’s eyes stare at its Arabesque patterns and pull their eyes from the square paved to the throne. The entrance door of this mosque is made up of an integrated plane tree wood that it was 400 years old when polished to become the door of the mosque. That means the door of the Sheikh Lotfollah mosque is 400 years older than the mosque building. The entrance to the mosque is full of beauty. But these beauties are clear in darkness, the darkness and brightness of a luminous charm at the end of the corridor.

When at the end of the corridor, we tend to left and enter the inside the mosque, no matter whether you are Iranian, European or originally from Isfahan, you will be amazed by all the magnificence that suddenly comes to light. The surprise of the mold of all the people who enter this mosque, the courtyard of the Sheikh Lotfollah mosque is a scene filled with Iranian- Arabesque art, which, in order to deepen in these beauties, takes hours of time. how light comes from each window, and the secret of the words around the walls of this mosque? There are some of the questions that need more research and explore.

This mosque has a nursery underneath of itself that its turquoise blue from the floor to the last point of its roof. A peaceful color that women shelter there for resting. Under the dome of Sheikh Lotfollah mosque, there are more wonders to see. A Peacock that under this dome, closes and opens its wings or despite the windows and the lights, inside the mosque is not visible at all are some of these wonders that nobody believes it till they see it.

But in the middle of the square, the sound of those Horse hoofs is heard more than before, it is like in the middle of history, there are standing horses that take the travelers to a journey during the time. This is not all of the Naqsh-e Jahan square. Just in the northern part of the square, there is a bazaar that today there is nothing left of its paintings, but on the two sides of the gate, the symbol of Isfahan, the arc is painted.

This is the entrance or the gate of the grand bazaar of Isfahan. This bazaar, which is the second layer of the Naqsh-e Jahan square, is part of the Safavid government and continues to the Jameh mosque of Isfahan. Everything you want, you can find it in this market. Well, it is impossible that a tourist enters this bazaar and not buy anything. What today you can buy in Naqsh-e Jahan square’s bazaar from handicrafts to the edible souvenirs, ice cream to the drapery.

Read about other attractions of Isfahan: