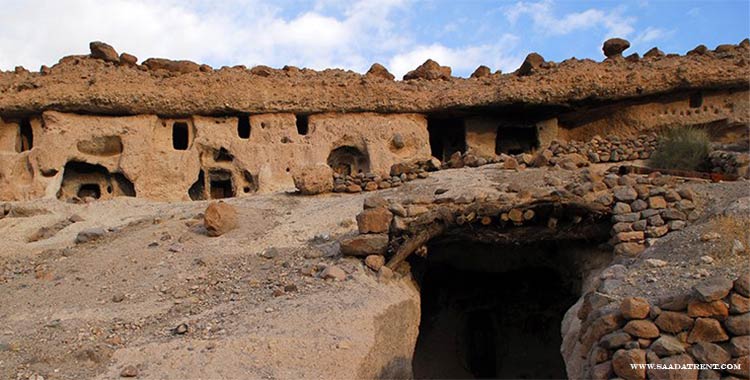 Rocky village of Meymand is another international iran attractions that has been registered at UNESCO world heritage site and has received the Mercury Prize as the seventh cultural event of the world.

Perhaps many years have passed since the human being had lived in caves, and with the formation of skyscrapers, villas, and modern buildings, no one can imagine that someone will continue to live in the cave; but it's just enough to make your way to Kerman province and go around the rocky village of Meymand near Babak city to see something similar to the residential caves.

Rocky Village of Meymand is where houses are carved inside the mountains and offer different spaces to their inhabitants. A village that, after thousands of years, still hosts humans living in it.

Rocky Village of Meymand is another international Iran tourism attraction that has been registered at UNESCO world heritage site and has received the Mercury Prize as the seventh cultural event in the world.

Meymand is one of the first settlements made in the Medes period by the Aryans. Some people believe that the building of the rocky village of Meymand is for the sake of the beliefs of its early inhabitants. They say that followers of this religion believed in invincibility and immortality, and thus built homes in the rocks that are still alive nowadays.

This village belongs to two or three thousand years ago; this is proved by the discovered pottery in this area. This pottery dates back to the Parthian, Sasanian, and Islamic periods.

During the Parthians, the nomadic tribes migrated to different parts of southern Kerman. But those tribes who didn't, at the end of the Parthian period and early Sassanid period, chose clean climates for habitation and built houses in the mountains.

Meymand is very much considered due to the structure of his homes. Due to its insecure strength, this settlement has seen its physical and social changes over history, and its most recent changes are related to later decades.

Rocky Village of Meymand is located in the hills and you can't see any signs of it near the entrance. Several observation towers (castles), with a circular plan, are seen above the hills adjacent to the village, from which they can see the Meymand fort. The villagers were probably connected with the castle through these towers, thus becoming aware of the enemies' onslaught.

No houses in the structure of this village are made by putting stones and bricks. Indeed, huge amounts of soil have been harvested to make Meymand a dwelling place; actually, people had taken the masses out of the ground and progressed to create such a masterpiece without the need for clay, brick, and mortar.

As we said, the houses are located in the cliffs of the tuff (fire extinguishing ash), and the roof of each house forms the other side of the house. The tuff is located below the layers of conglomerate (coarse rock), and the wind and rain cause small and large holes to form on the slopes of the mountains, and then the human expanded it.

A housing unit here is called "Kiche", which may be two to five floors and includes one or more rooms and stables. All of these spaces have a common entrance and can be seen on the edge of the garden, on the one side, and in the living room on the other.

The structure of all cages is not alike and the size and number of rooms vary. In this habitation, all human needs have been taken into consideration, and the room makers have cut down windows of various sizes for bedding, utensils, boxes, lights, and more.

There are no cupboards or chests near the walls of the houses in Meymand because the hole or slope is created by slinging and people can put things in and out of them. The key is in the wall at the sidewall and holds the key inside to place the tab on the back.

Most residents of the rocky village of Meymand are dairy farmers and in the first4 months of the year and they take their livestock to the plain. But in the next four months, they are engaged in horticulture.

Oldies, and people of the village, spent the cold days of the winter by weaving carpets, gills, felt, and baskets.

Meymand is a mountainous village and it includes cold winters and temperate summers. The best time to travel to the Rocky village of Meymand is near the spring as well as summer. Of course, in early fall, going to this village will have his pleasures.

In general, the greenery of the Meymand Plain and its favorable climate have attracted the attention of many townspeople and residents of the surrounding villages and you don’t have to lose your chance to visit here on an Iran tour. Also, people spend their leisure time in this village or near the fountains, canals, and the Meymand River.

At the beginning of the village entrance, after crossing the bridge, several houses are facing the village that are welcoming guests as a traditional guesthouse. The rooms of the residence provide the real conditions for the past lives in Meymand village, and only little physical changes have been made to protect their historic texture.

In addition to the indigenous residence, some villagers have also equipped their homes to accommodate guests to have a source of income. By talking to people in the village, you can take their homes to stay; just note that before you rent a home, be sure to visit it and make sure of its cleanliness and amenities. Note that these houses also don’t have bathrooms and WC but there are public bathrooms and WC in the village.

*For entering the rocky village of Meymand you don’t need to pay but for food and accommodation or buying souvenirs from locals, you have to pay some money.

Suggested visit time: Few hours to 2 days and a night

*For reaching this village there aren’t any public vehicles so we recommend you to use car rental in Iran services.