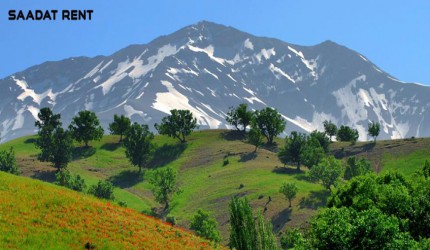 If you want to travel to Iran this summer, do not miss these places! Admit it or not, summer is considered as the best...

If you want to travel to Iran this summer, do not miss these places!

Admit it or not, summer is considered as the best season for traveling, so if you decided to take an iran tour this summer, good choice an if you not, get ready because after reading this article, you will decide to visit Iran this summer.

There are countless options available for summer travel. You can travel to Tehran, Kashan, Isfahan, and Shiraz. In the direction of art and civilization, which gives you dozens of iran tourism attractions but here were not going to talk about this famous and typical destinations.

We are going to interduce you best epic destinations in Iran base on your interests and purpose of traveling to Iran in the summer. So do not miss our list.

Danial Cave; If you are interested in trekking and caving

Danial Cave is one of the Iranian Caves in the Alborz mountain range. In the water cave of Danial, you will face with ice water, bats and several million years old strange shapes. A cave that its cool weather makes it a great choice for a summer trip. Here you have to walk for five hours in the water and in the dark.

Sometimes the height of the roof reaches up to 50 meters, and sometimes you have to move half-height under the ceiling. The water temperature is about 17 degrees, and the temperature inside the cave is between 20 and 25 degrees centigrade throughout the entire season.

Address: From Chalous, you must go to Ramsar and Tonekabon. After passing through the Namak Abrood, you’ll reach the motel Qo. From there you should get away five kilometers from the city to reach Daniel village and the cave.

Kandovan village ; If you love to visit a mixture of nature and history

Kandovan is one of the three rocky villages in the world, which has brought its unique grace. This is the only rocky and residential village in the world. A village that its elders say, they just sleep under these rocky ceilings, or to their own words, Gaia for many years. Probably the habitat here comes back to the Mongol invasion, which the villagers have taken refuge in, but have remained here.

Almost all homes in this direction are similar to the initial habitats of humans, and all of them are conical. There is also a small ethnographic museum that displays some of the Kandovan's life-related gadgets. Read more about this village: Kandovan Ancient Rocky Village

Address: From Tabriz, you must enter Azarshahr road and reach the village of Kandovan after passing Sahand Township.

Carpet Museum; If you are in the capital of Iran

Carpet Museum is one of the museums in Tehran province that has interesting Iranian architecture. There are 1500 carpets here, but for now, 150 boards are available. Carpets that each of them has a story. Many of them have been in palaces for many years, under the control of the kings, rulers, and courtiers of various dynasties of different periods of Iranian history.

Carpet museum that is open every day except Mondays and mourning days, from 9:00 to 17:30 every day! You can go there and in addition to watching the eye-catching carpets from Tabriz, Kerman, Kashan, and Qom, you can also see the world’s oldest carpet, Pazirik, but its copy version! Because the original one is kept at the Saint Petersburg State Hermitage Museum. This 2500-year-old Pazirik plot and design show a completely rugged Iranian carpet.

Shahr-e Sukhteh; If you’re crazy to watch the wonders of history

such as ancient skull surgery, artificial eyes, the world's first animation, mosaics, marble dishes, and ... discovered in the early twentieth century. Along with this ancient site is a museum that holds objects from archaeological excavations. This museum contains several hundred ancient objects that you can watch free of charge.

Address: From Zahedan to Shahr-e Sukhteh is 140 kilometers and from Zabul, 55 kilometers.

Dena Mountain; If you want to travel to a pristine area

Dena Mountain is one of the most sacred regions between iran ecotourism destinations. One of the most frequent regions of Iran in terms of plant and animal, a region on the slopes of the Dena peak and the proximity of the Si Sakht city in Kohgiluyeh and Boyer-Ahmad Province.

By going here, you can watch different oak forests and various plants, and if you have a chance, you can watch animals such as brown bears, wolves, whole and goat, Quercus, varieties of warbler and red beak crow from close or far away.

Address: From the city of Yasuj to the northwest, after about 34 km, you arrived at the Dena or Si Sakht Town. There are only eight kilometers from there to Gol Mount.

You can watch the beauties of the wonderful valley and its breathtaking mountain in telecabin. Heyran is known for its lush climate and its dangerous bending roads. You can watch and enjoy the beauty and awe, beautiful valleys and mountains by flying telecabin.

The length of Gardaneh Heyran telecabin is about 1.6 km, and when you enter it, it will take between 11 and 20 minutes to reach the final station, depending on how fast it is.

Address: The telecabin station is located in the middle of the cities of Astara and Ardebil, and is about 35 km from each.

Falak- ol -Aflak Castle; If you are interested in history

The historic castle of Falak ol-Aflak is one of the most impressive historical and tourist attractions in Khorramabad. The historic fortress of Falak al-Aflak is the first to occur on arrival at Khorramabad. This castle which has been reigned from the Sassanid era is also known as the 12-tower castle and the Sepehr castle.

Falak ol-Aflak was built on the ruins of the castle known as Shapur Khast, belonging to the Shapur I Sassanid era. From the Safavid period, the Falak ol-Aflak was restored to reach its present moment in which there are anthropological and archaeological museums.

Address: If your origin is Tehran, after Qom and Arak and Boroujerd and 500 km drive to Lorestan, you will arrive at Khorramabad.

Traveling During Covid-19 | A Complete Guideline

Traveling During Covid-19 | A Complete Guideline