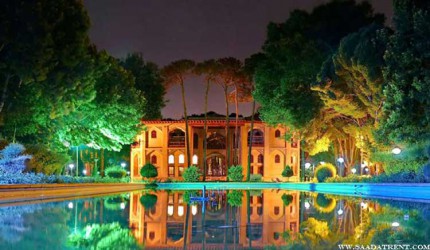 The Hasht Behesht palace is a historical palace in the city of Isfahan, which was built during the Safavid era and in 10...

The large garden where the mansion is located is part of the great garden of the world that was built by Shah Isma'il I and was divided into several parts during his successors, especially Shah Abbas I.

The Garden of Hasht Behesht existed during the time of King Safavid and added to the trees of this beautiful garden in the course of the Second Shah, the Shah Abbas II and King Soleiman. This two-floors building with beautiful vaults and abundant decorations is one of the glorious sample of the Safavid era architecture.

The mansion of Hasht Behesht Isfahan Palace is 30 meters long and 27 meters wide. To enter this palace, you must enter the stairs connected to the east and west views. After you arrive there is a very high Porch with 2 wooden columns.

The central part of the palace is constructed in four phases and its porch is facing the north. The roof overlooking this four-story building is covered with glamorous gypsum mantles that in Persian they call it Moqarnas. The first floor rooms in the four corners of the mansion decorate with painting.

On the second floor, the mansion also adds a number of porches and rooms and vaults and windows to its beauty. This floor is divided into corridors and chambers, each with a special decoration. There are fountain and Wall heater in some part of this rooms. Walls have also been covered with many mirrors. you can use Iran tour for more information and attractions.

What is important in this mansion is a relationship that has emerged between different spaces and parts. The mansion, while being diverse and multiplicity of space, has unity and integrity and beautiful decorations.

The decorations of the mansion during the Safavid period were so magnificent and artistic that many travelers have been praised for its admiration. Unfortunately, today there are no traces of wood fences and crystal frames and crystal cup holders and elegant colorful glass since there have been many changes in the post-Safavid period, especially in the Qajar era. These changes are to such an extent that some travelers have taken it from the Qajar era.

At the end of the Qajar era, the mansion of Hasht Behesht became private property of individuals and was deprived of precious jewels of the Safavid period, as today there has been no effect on all the splendor inside the palace and the waters and streams of water. With all the beauty of Safavid, this building has remained.