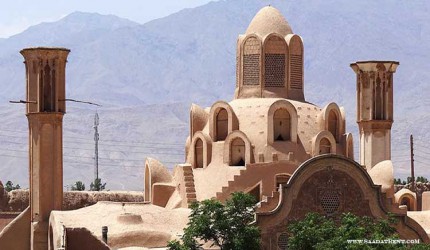 The beautiful Kashan is one of the most historic cities in Iran, which has a reputation for having big, beautiful and ol...

The beautiful Kashan is one of the most historic cities in Iran, which has a reputation for having big, beautiful and old houses. These houses represent an unparalleled and valuable Iranian architecture that has kept their identity and color in their time and place.

In our Iran travel blog we are going to introduce some of the most famous and beautiful historical houses of Kashan.

This house is the most famous and beautiful historical houses of Kashan and one of the architectural masterpieces of Iran. It's almost over 186 years since its construction, it is located in Sultan Amir Mohammad's neighborhood in the old context of Kashan.

There are three interiors, exterior, and special crew members, along with a very luxurious, magnificent decoration, making this home very special.

This historic house is also located in the old context of Kashan, in the Sultan Amir Ahmad neighborhood, which its dates backs to the Qajar era. Architecturally, the Borujerdi House is very similar to the Tabatabai house.

The reason for this resemblance was the request of the Tabatabaei family from the Borujerdi family to build a house like their home as a condition for marriage and intercourse between the two families.

The construction of this historical house of Kashan backs to the late Qajar and early Pahlavi times. The Raheb house has such parts as the Shah, the entrance vestibule, the summer Avon, the winter Avon and a windbreak.

Today this house is being used as a traditional guesthouse that you can stay in your Iran tour.

This very beautiful and historical house of Kashan is one of the largest old buildings in Kashan, which today is used as a 5-star hotel. The antiquity of this house goas to Zand dynasty with 80 rooms and an eye-catching courtyard.

Here is a great place for accommodation if you are in a group tour. We suggest you to use van rental in Iran services too for your transport in city.

The Manuchehri house is considered as one of the historical and architecture treasures. Today, this home is used as a traditional residence.

This house is located in Sultan Amir Ahmad neighborhood too, which was built in the second half of the thirteenth century.

Having an Islamic architecture such as design, tidying up has made this home one of the most beautiful houses in Kashan. Since 2011, this house has been used as a traditional restaurant and dining room.