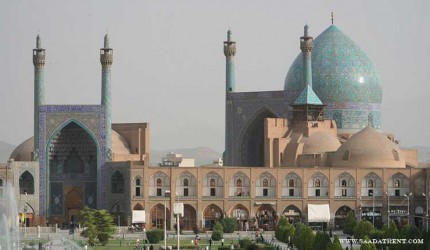 Isfahan Imam Mosque is where that you’ll surround by art and history. By looking south of the Naqsh-e Jahan square, the...

Isfahan Imam Mosque is where that you’ll surround by art and history. By looking south of the Naqsh-e Jahan square, the huge turquoise dome and the tallest Minaret of the square show themselves and the magnificent blue chamber is the first thing that catch our eyes when we want to enter here.

This is our visit place; Isfahan Imam Mosque. so stay with us in our Iran travel blog.

Let's go back to the story of this mosque that began with a vow. Safavid king, Tahmaseb, who had just survived one of his wars, vowed to build a mosque for his salvation; however, In the midst of wars and conflicts with Uzbak people, he did not find the opportunity to build it.

History, however, made a chance that his grandson, Shah Abbas Safavid, gave the grandfather's vow to the greatest possible extent from his net worth and rewarded it to his grandfather’s soul. Isfahan Imam mosque was built in competition with the Jameh mosque of Isfahan.

Shah Abbas, the grandson of king Tahmaseb, who recently elected Isfahan to the capital of Iran, wanted to shift the business axis from the city center and around the Jameh mosque to the Naqsh-e Jahan square.

He ordered to build a mosque with the suitable capacity to hold the religious ceremony of the capital. A simple but magnificent mosque, with eye-catching blue tiles all around it. The dome of the Isfahan Imam mosque is taller than any building in this square, and it overlays the entire city that represents the important position of religion in the Safavid dynasty.

For each tourist, before visiting a building, it is a question of what I will see and what is different from its similar buildings. In response to this question, we draw your attention to the distinctive features of the Isfahan Imam mosque in relation to other mosques:

Isfahan Imam mosque has a main dome, 4 minarets and 2 shabestans in east and west and surrounded by 4 porches and courtyards. The monumental marble altar of this mosque is the most beautiful altar among mosques.

With the aim of saving time and money, a new technology was used for the tiles of this mosque that called seven color tiles. The use of the works of famous artists as calligraphers, woodcarvers and stoneworkers has given special attention to the decorations of Isfahan Imam mosque.

Despite the multiplicity of artists and arts that are used in the mosque, its unified identity is unique for any sight-seeing. It's like all this mosque has been built by only one person and leads its worshipers to this unity of spirit

The magnificent gate on the south side of the Naqsh-e Jahan square invites the viewer into his own. The celestial blue of this gate, in contrast to the pale and white colors of other buildings of the field, represents the supreme and extraterrestrial status of religion. The use of blue and azure colors, according to some experts, expresses the philosophy of waiting and looking at the sky among the Shia Muslims.

Some elements of the Iranian architecture of the mosques are inspired by the ancient Persian temples. In every religion, the worshipers need a safe and peaceful environment that does not disturb by travelers and other visitors.

During the Sassanid period, a hallway or a vestibule was built around the main temple, which, while avoiding the noise, guided the pilgrims to the religious center. The shaft of the Isfahan Imam mosque has been inspired by these ancient chambers.

This corridor has no angles and is made so that you do not feel that changing your direction by walking inside it. The corridor, by following a short distance in a little darkness, brings you to the courtyard light, which is a symbol of entering the world of spirituality.

The existence of vast spaces between the columns leads to the continuity of the worshipers and the solidarity of the prayers that is one of the features among the Muslims.

It should be noted that the Isfahan Imam mosque is a Jameh mosque in the highest class of mosques, which mass worships such as Eid al-Fitr prayers, ritual ceremonies, and Qadr nights in Ramadan. Jameh mosques have had many government, social, educational and public functions throughout history, and were run under the supervision of the most prestigious people of the state.

Innovations and interesting points at Imam Mosque of Isfahan

How architects have overcome these challenges with creativity is always one of the coolest points of visiting these memories of history. Prior to addressing the architecture and history of this monument, you will be introduced to some of the creativity used in the Isfahan Imam Mosque:

1- Solving the problem of angle difference with Qibla

Naqsh-e Jahan square is aligned with four main directions, but according to Islam and Iranian culture, the construction of Islamic mosques should be entirely towards the Kaaba and towards the southwest.

The symmetry of the structures around the Square did not allow the mosque designers to create the mosque in the direction of the Qibla by creating a corner and distorting the field view.

In addition, the Isfahan Imam Mosque Indicators and dominance of this mosque to the entire periphery was prior. To solve this problem, the designers implemented a surprising strategy, such that from the main entrance to the Naqsh-e Jahan square, Qeysariyeh, the minarets of the mosque entrance is in front of viewers and the two lower minarets behind it are like the reflection of the entrance minarets.

But these minarets and entrance do not cover the mosque dome and the 53-meter large dome is visible from all parts of the square. Sheikh Baha'i, a mathematician in Shah Abbas period, calculated the Qibla direction in Isfahan Imam Mosque.

2- Sound reflection in the center of the dome

Many foreign and Iranian tourists stand below the central point of the main dome of Isfahan Imam mosque and test their voice reflection in a radius of at least forty meters. This is one of the most fascinating experiences of visiting this Mosque.

This attribute the sound reflection to the structure of the dome, which, in the absence of the speaker, enabled the people who says Azan, to hear their voice in the ears of all the prayers in every point of the courtyard of this mosque.

In the western courtyard of Isfahan Imam mosque, a rectangular stone is located next to a triangular stone. This simple but interesting engineering structure is named Count Hour Stone.

This Indicator stone is indispensable for all 365 days of the year at noon. In fact, this feature has been the basis of the noon time for the worshipers to pray. The story looks complicated. As you know, the angle of the sun's exposure to the earth varies over the course of the day and season, so how does the index rock never has shade at noon?

The answer is in the size of the triangle stone. Based on the surveys, the intelligent designer of the Stone, Sheikh Baha’i, by accurately calculating the sun's angle to this stone and the proper location, placed a triangular stone shaped just as much as the rectangular stone shadow next to it and prevents the shadow from being seen when It's noon.

Due to the lack of knowledge of people about its work, this rock is not well-known and there is no proper photo of it. If you visit and take a photo, share it here with us to be published with your own name.

4- Toilets inside the mosque

In the mosques of the Islamic world, to keep clean of the courtyard of the mosque, they always made the bathroom and toilets out of the yard. This item was more closely observed in the Jameh and main mosques encountered by the mass of worshipers.

In Isfahan Imam mosque, for the first time, a bathroom was foreseen in the corner of the mosque's building, when people walked to the mosque after passing a long corridor. The point is that the architects noticed that the air of Isfahan is warm and dry. Considering this advantage, the distance between the toilet and the main courtyard was considered to be so much that it prayers shoes became dry until they reached the courtyard, and the mosque's courtyard stays clean, and also the toilets were inside the complex and close to the mosque.

Suggested visit time: about an hour