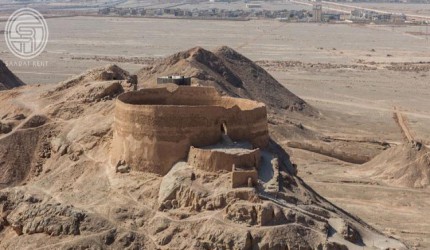 Near Yazd, there are some towers of silence, which are one of the biggest and most important Remnants of Iran forefathers.

These towers nowadays become one of the important iran attractions and welcomed domestic and foreign travelers.

What are the towers of silence?

Before you get to know the Zoroastrian towers of silence, it's good to know what the crypt is. The crypt is, in fact, The buildings that are made of raw clay and has been used extensively in ancient times. For example, they were a place to perform religious ceremonies after the death of a person.

The Zoroastrians, as an iranian culture, from the ancient times to the few dozen years ago, they placed their custody inside the towers of silence after a ceremony with specific traditions.

These crypts were either constructed naturally or people made them, all of them were built at a height to allow birds like Crests to be able to access the corpse. Afterward, their bones were placed inside the well to prevent soil contamination.

For building these towers, Iranian architectures use some special rules and principles. For example, the considered separate locations for the bodies of women, men, and children.

Why our ancients built towers of silence?

Our ancestors believe that nature has created of four elements; water, fire, soil and air and when a person dies, they repel him to one of these four elements, without contaminating other elements.

Those who live alongside the seas, had thrown their dead to water; the foresters burnt the dead in the fire; the inhabitants of the plains buried the dead bodies into the ground, and eventually those who lived in the cold and snowy mountains brought the dead to the top of the mountains and put them in the towers of silence or in the air.

The Zoroastrians kept the fourth method until this time. They did this method in Yazd, Kerman, and some parts of Iran for about 40 years ago. Now, only the ruins of some of these towers of silence have remained in these cities.

Where is Yazd towers of silence?

Yazd towers of silence are 15 km south-east of this area near the Safaiyeh area. These towers are located at low altitude mountain that called the Dakhmeh mountain. These crypts are one of important religious attractions in iran tourism.

When you arrive, you see two round stone towers, with empty space between them which is famous as the Zoroastrian crypt or court. One of these towers is newer than the other one and belongs to the Qajar dynasty that you can visit them if you have Yazd in your iran tour itinerary.

How the towers of silence had built?

Towers of silence actually were circular spaces that were built on top of high mountains and were located far away from villages. They built a wall around the crypts of rocks and cement and considered a small iron door to enter and exit.

Principles of building towers of silence

In order to build a handmade crypt, the architects of that time used raw clay and plaster so that the contaminated material does not penetrate the ground. In constructing towers of silence, some special principles such as banging 4 large nails, 36 average nails and 260 little nails to the ground.

Also, they twisted hundreds of cotton and wound the strings around the towers of silence around these nails three times. When they were building these crypts, they had whispered some prayers and built the cellar on this place.

inside towers of silence

The first part, which started from the wall and was larger than the other two, was for the dead man bodies, the second part for women, and the third part of the children.
There were also some buildings near the catacombs where the Zoroastrian religious ceremony was held after the death of the people.

More information about the towers of silence:

*To access towers of silence you need to use your personal car or use car rental iran services.

Narin castle (orange castle) is related to the Sassanid era and is located in Meybod, and this work...

Amir Chakhmaq complex is one of the most prominent historical buildings in Yazd, in the middle of th...