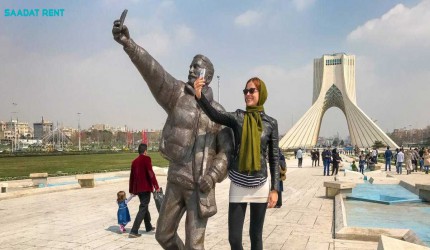 Travel to Iran like a local Traveling to a new country can make everyone nervous. Especially when you’re going to trave...

Traveling to a new country can make everyone nervous. Especially when you’re going to travel to a new country with completely different culture and people like Iran. You may read many blogs about iran tourism, travel books or discuss about that country in travel groups or in TripAdvisor, but there are some special rules and norms that only local people of that country know about it.

If you read one of our iran travel tips articles, 5 reasons why you should visit Iran now, you may decide to foregt about all your worries and thoughts and experience traveling to Iran. If it's true, congratulation on your smart choice.

So, if you are interested to travel to Iran like a local and get acquainted with some of Iranian norms and behaviors that may look weird for you, do not miss this article at all.

Iranians are Not Arabs

This is a fact you may know about it before. But Iran's location in the middle east and its official religion, some people may think Iranians are Arab. But its completely wrong. Although Iranians write in Arabi letters with a little difference and many of Arabians world came into the Iranians language but they are Persian and they don’t speak Arabic, they speak Farsi.

But why we said this as the first thing you need to know? Because of the Arab invasion of Iran in several centuries ago, Iranians are really sensitive about their nationality and they might feel offended if you tell them that they are Arab or great them with Arabic words.

Be prepared for some crazy drivers in Iran streets

Well, we should confess that driving in Iran may be dangerous. Iranian drivers especially taxi drivers sometimes drive like crazy. So, if you decided to use car rental iran services, you should be really careful.

Be ready for heavy traffic

Traffic in Iran streets and highways specially in Tehran and other big cities are so common, so if you are going to be in a place in a certain time, you better estimate the time you may stuck in traffic.

You can also estimate the time you’ll arrive a place with Waze application.

Don't take the Iranian dress code that much serious as a traveler!

Iranian's dress code is one of the most important things that you should be aware of, especially for women. As we said in our article about Iranian dress code and hijab, that you can read it in this link: Hijab for women in Iran, women in Iran should wear hijab, headscarfs, and long blouses, but a thing you should know as a local traveler is, for foreign tourists, this rule isn’t that much strict.

So, do not worry if your hair is visible under the scarf or your neck can be seen or your mantou is not that much long. So instead of worrying about this issue, enjoy your iran tour and don’t worry if you shawl suddenly fall off. Nobody’s going to arrest you.

You need a Vpn to use internet freely

As you may know, if you want to access the internet freely in Iran and use all applications and social media you may need, you need to install a VPN with acceptable spend on your phone.

Forget about Alcohol in Iran!

I’m pretty sure, you are aware that you are traveling to a Muslim country that drinking alcohol is illegal in there. So, it’s better to forget about alcohol drinks for some days and do not have them with yourself especially in your car.

Yes, Kebab is delicious, but there is plenty of iranian food that you can try on your trip. Especially many Iranians food like adas polo, Koo Koo sabzi, Lobia polo, Kashk-e Bademjoon and … are completely suitable for vegans and vegetarians.

You can read about Iranian delicious foods and also the most famous local foods in Iran in these links below:

The most famous local food of Iran

read about them to know what you like as a local who knows what’s his favorite food.

Know when you should take your shoes off!

So, if you’ve found some Iranian friends and they invited you to their houses, remember this tip.

You better get used to Iranian toilets

You can find Western toilets in restaurants, hotels, hostels, but it is better to know how to use Iranian toilets or squat toilets. Also, if you use the toilets in the outside, it's better to bring a roll of toilet paper with yourself.
Also, If you want to ask people where the toilet is, use the word "WC".

It means you better drink the sweet tea, but do not drop sugar cubes in your tea. You should put it in your mouth and after that drink your tea.

Don’t Blow Your Nose in Public

It is considered gross between Iranian people so don't do it. If it's necessary, do it in the bathroom.

You're going to feel like a celebrity in Iran

As soon as people find out you are a foreign traveler, they may like at you even stare at you, or they may try to talk with you and ask you some questions.

also, they may ask you to take a selfie with them. So, you’ll be treated like a celebrity in Iran streets.