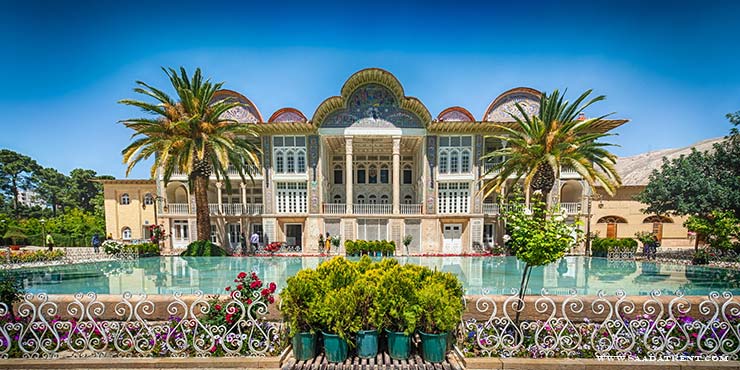 Eram garden four seasons beauty of Shiraz, is one of the most beautiful gardens in the province of Fars, and even the whole country, attracting a lot of domestic and foreign tourists

Eram garden four seasons beauty of Shiraz, in a corner of the northwest of this city, is a beautiful garden that over the years, in cold and warm weather has lasted until today to entice its viewers to beautify its beauties and give color to their moments.

Eram garden four seasons beauty of Shiraz is one of the most beautiful gardens in the province of Fars, and even the whole country, attracting a lot of domestic and foreign tourists to Iran tour, with tall trees and roses that catch everyone's eyes.

Despite numerous studies and researches, there is still no information from the date of construction and the founder of the Eram garden, but the existence of the name of this garden in the travelogues of the tenth and eleventh century AH indicates its existence during the mentioned times.

There are other signs of the existence of this garden during the Seljuk dynasty, and given the rule of the feudal system on the community at that time, most likely, the owners of Eram garden four seasons of the beauty of Shiraz have been rulers of the time.

According to the traveler's writings, this garden has been magnificent since the Safavid dynasty and the historical sources mentioned its improvement during the Zand period during Karim Khan Zand.

Currently, Shiraz University, Garden and School of Agriculture, owns the garden, and the law school owns its building and also this garden beside Fin garden, is registered as a UNESCO world heritage site too.

The work of mirrors and interesting paintings and oil paintings of the rooms' ceiling and porches were restored, and the gardens that were destroyed were restored to their original designs. The tile of the facade faces, which collapsed, was re-installed with the preservation of the original style at the desired location.

The main building of Eram garden

The main building of the Eram Garden can be considered as a fairly complete example of the buildings of the middle Qajar era, like other monuments of its period, reflecting the principles of the architecture of Zand and Safavid.

and even the mansion tiles are also quiet The images on the walls are copied from walls of Safavid era buildings.

Eram garden four seasons beauty of Shiraz has a big vegetation diversity and has many plants from different parts of the world; which is like the form of a fair of flowers and plants, with a variety of ornamental flowers and herbs, as a botanical garden of Shiraz University, it is used to expand the science and research of plant science.

What brought this freshness to Eram's garden is the freshwater that flows into the pool and enters the area under the iron fence of the basin. The water continues to flow into the pools around and flows through the wide main passage and other streams and watering plants.

What can you do in Eram's garden?

Seeing a historic site and visiting one of Iran's tourism attractions is just one of the reasons you can get to the garden. There are plenty of opportunities in the garden that multiply your enjoyment of travel:

Walking in the Paradise: The Garden of Eram brings you a unique combination of history and nature; a compilation that creates a paradise that everyone loves it. By walking in this garden, you will see a special effect in every moment, which brings you pleasure

Wear traditional clothes: This garden makes it possible with its historical atmosphere to make the journey to the past and coincide with the peoples of that time. In this garden, you can experience traditional wearing clothes and pay extra money for recording memorable images.

Cultural store: There is a pavilion in Eram Garden for selling various products, including cultural products, handicrafts, and souvenirs, which can give you a fresh experience of shopping.

Delicious Experiences: If your hours of gastronomy are long, you can eat many delicious foods that are offered in this place. Certainly, Shirazi Faloodeh has many fans in this beautiful city. you can enjoy a delicious meal in Shiraz and give yourself a taste of sweet moments in a completely traditional and Iranian atmosphere.

* We recommend you to use car rental in shiraz services and drive in shiraz's beautiful streets too.