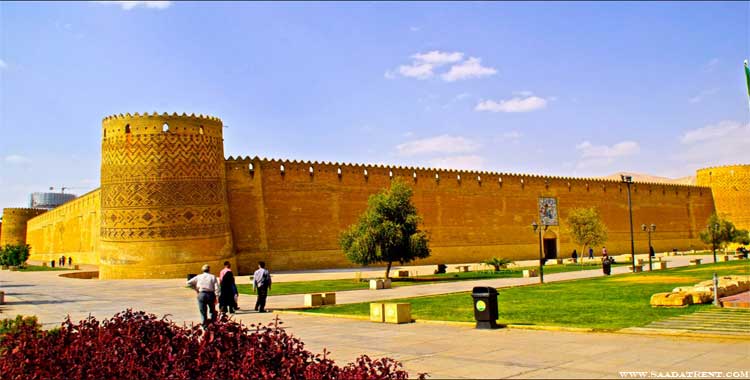 The Karim Khan citadel, also known as the Karim Khan Prison, was built in 1108 AH and ordered by Karim Khan Zand, the founder of the Zandi Dynasty in Shiraz. This building, which is one of Zandian's most prominent works of art, attracts many tourists every year. Karim khan citadel is one of the most popular Iran tourism attractions.

In 1350, the organ was entrusted with the Cultural Heritage Organization, and its restoration began several years ago and is intended to be used as a major Fars museum upon completion of the restoration.

The architecture of Karim khan citadel

The Karim Khan citadel is 4000 square meters in size and has a very large wall reaching 12 meters. The facade of this building is brick and its design is both residential and military.

Most of the materials used in this building are stones and plaster. All 12-meter-wide surrounding walls have a thickness of 3 meters at the bottom and 2.8 meters in the upper parts. The design of this building is in fact both residential and military. It is also evidenced by tight and very tall exterior walls with extras in the upper portions of the wall used for the deployment of soldiers and shooting at the time of the war, as well as the ditch that was previously dugout.

The towers around the citadel have three separate floors, with circular stairs for them to footwork. There are also two rooms on the floors, one for the rest of the soldiers and one for holding the gun. you can use car rental in Iran for easy traveling and visit all attractions in Shiraz

citadel baths can be considered as the first exclusive baths in this style in Iran. This bath is the most intact part of the Karim khan citadel and has been used for bathing royal households. This bathroom is similar to many old bathrooms with a dressing room. Those four benches are seen to sit and change clothes.

Under the dressing room, you can also find shoes and clothes packages. There are octagonal in the middle of the dressing room. At the corner of this area is a place for warming up space by fire and making tea and hookah.

Water Karim Khan citadel has been supplied from Rokn Abad aqueduct water; this water is the best water from Shiraz in terms of mineral salts and today, with the destruction of this aqueduct, the water supply system of the citadel has also been destroyed.

In front of each porch, there is a rectangular pond. The Karim Khan citadel ponds Collection is monolithic and there are fountains in them. The stone of these ponds is a limestone type known to Atabak. These types of ponds are very resistant to water and erosion. There are waterways along with the northern and southern ponds of the complex, which at the end reaches a rocky pit of cubes.