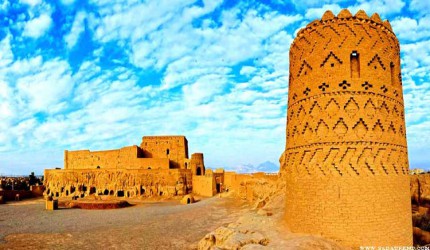 Narin castle (orange castle) is related to the Sassanid era and is located in Meybod, and this work was registered on Au...

Narin castle (orange castle) is related to the Sassanid era and is located in Meybod, and this work was registered on August 8, 1354 with the registration number 1086 as one of the national works of Iran. This spectacular castle is the world's second-most castle, with about 7,000 to 12,000 years old.

The city of Meybod, one of the oldest cities in Iran and Yazd province, dates back several thousand years. Due to its historical texture, the city has registered many of its valuable monuments and buildings in the list of the country's cultural heritage. City seems to have had a lot of significance and at this time, based on the discovery of a collection that archaeologists attribute to the Sassanian era. Narin Castle has been of great importance since the advent of Islam, which can be considered as a strong and indestructible place against enemies and aliens. visit Iran and enjoy.

The interesting and remarkable things about Narin castle can be seen in the presence of accessible underground networks that the designers and architects of that era have built to provide and cater for the needs of people, including water and food. Some archaeologists have estimated the habitat of this historical collection about 3-4 thousand BC.

Narin Castle, also known as the Dalan Fortress, has been built on high tides that can be found all over the city of Meybod and around it. Some architectural experts believe that this huge historic mansion is an ancient fortress that is considered to be one of the old adornments of the era of ancient Iran, which remains firmly established due to the type of architecture used in it. Archaeologists and architects, the area of this monument dating back to the Parthian and pre-Islamic periods, has been mentioned in the Shahneshin 3 hectares and some 15,000 square meters of resources, which, according to the number, is related to the Sharestan section.

As in all of the castle cities of Iran, excavation of the Khanegh is part of the city's defenses, in designing this city, Qal'eh also has been considered for defense and military affairs against aggression and attack of foreigners.

The ancient architects used their skills in Iranian architecture and built here. Narin Castle have built 4 high-rise towers , which, unfortunately, remains only their central part in the present day. Also, the construction of numerous rooms in this historic and valuable castle is another architectural part of the castle, with only parts of these small rooms that are nesting and interconnected. While a large number of these rooms are not accessible due to their presence in the lower parts of the castle and the collapse of the corridors. In fact, it can be said that the Narin Castle consists of two main parts for residence and life, which is known as the upper and lower parts.

Indoor lighting is created in the form of openings that are located in the upper portions of the walls. The Narin castles or the castle towns in different parts of Iran are a kind of historic urban history that has been remembered since ancient times. The Narynqlay maybad also after the Arg Bam is the largest city of Iran's castle castle, which has a structure similar to the structure of the Bam Citadel, and is as beautiful and stylish that the eyes of any visitor in the beautiful city can be seen. you can use car rental in Iran and visit beautiful attractions.