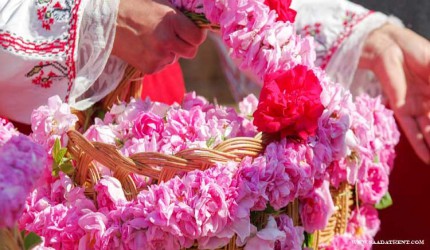 Among all the cities of Iran with this large number of tourist attractions, Kashan has a special place and is considered...

Among all the cities of Iran with this large number of tourist attractions, Kashan has a special place and is considered as one of the most important cities in Iran tourism and it hosts many tourists every day.

Especially in the spring and summer, this city has become one of the most important destinations for them and many trips to Kashan take place to visit the historical and natural attractions of this city and also Participate in the ceremonies like rosewater festival in Kashan that Is a long-standing and spectacular ritual of Kashan.

The fame of Kashan Mohammadi flower

Rosewater has existed in historical periods in Kashan, and to prove this claim, we can mention the Rosewater holidays, one of the ceremonies in ancient Iranian culture in Kashan.

In 52 and 54 SH years, when Bulgarian experts studied on roses, it was concluded that the Mohammadi rose of Ghamsar in Kashan, in comparison with similar samples elsewhere, has a better quality and superiority.

Most European cologne companies for making perfumes use essential oil of Qamsar flowers. This has caused the perfume and rosewater of Qamsar to remain a name product for a long time. In the reputation of Ghamsar, it is enough that the house of God, Kaaba is washed every day with the pure Mohammadi essential oil of this city.

What is rosewater festival?

One of the wonders of Iran, is the growth of most beautiful and perfumed flowers in Kashan's desert province.

This city is located in central desert of Iran. It also has warm and desert climate. The rosewater festival in Kashan date backs to many years ago; this festival in May 2018, attended by 80 countries.

To find out the history of rosewater festival in Kashan, you can find a study of the Tepe Sialk excavations that have the form of flowers with 7 petals, which is evidence of the fact that the inhabitants of this area are familiar with flowers and plants from the millennia BC.

Considering the evidence of the history books, the people who thought about inventing a device for the distillation of liquids and the ingestion of essential oils were Iranians.

When is rosewater festival?

Kashan is considered as one of the most important tourist destinations in Iran in the spring especially in May (Ordibehesht), due to the fact that it is rosewater festival in Kashan, this beautiful and colorful festival starts on Ordibehesht 15th and continues till 25th of Ordibehesht.

In addition to rosewater festival in Kashan, you can attend the ceremony of sculpting the Imamzadeh "Sultan Ali Mohammad" in Kashan on Ordibehesht 18th.

Where Rosewater festival is held?

Qamsar is located 30 km south of Kashan, and although the name of Golab (Rosewater) is more closely tied to Qamsar, but in other cities of Kashan, such as Niyasar and other are also professional in this field.

Niyasar, known as the ancient garden of Iran, is located 30 km west of Kashan, besides the spectacular waterfall of Niyasar, a fourteenth building on the western hills of Niyasar and fire temple, including its places of worship. Where it is unique to Kashan and not anywhere else in the world.

What happens in Kashan rosewater festival?

In Ordibehesht, the Iranian Mohammadi flowers of the Rosaceae family, finally grow and get ready for damask rose essential oil extraction. If you go to Kashan in June (Khordad), only the buds that were on the branches in Ordibehesht were left.

Rosewater festival in Kashan is arranged in groups and in the early morning. At this event, the organizers of this ceremony, in early morning, they Pick flowers and then the main ceremony begins.

This ritual will give you an opportunity to learn the process of damask rose essential oil extraction and buy the best fresh rosewaters and other flower oils that are produced alongside them. In most of the village houses in Ghamsar, the flower garden of Mohammadi flowers, special watering pots even the in small size can be found.

The ceremony was held in the past according to certain customs and traditions and when they collected the flowers from garden, they dug into the workshop with the help of a donkeys and with singing traditional songs and play instruments.

The stages of rosewater festival in Kashan

When you reach the Kashan planting workshops, due to the heat you may feel there, they prepare cool juices for you, so you can see the flowering process as calm as possible.

First, they put special boilers on the oven. Depending on the capacity of the pot, fresh flowers are mixed with water nearly 3 times more than flowers in that. By placing the cap on the pot, they also cover the possible openings to allow steam to remain in the pot. By turning on the flames of the oven or, in some cases, burning the firewood, it takes the 4-hour for completing this process.

Of course, before the start of the ceremony, they usually take the pot and flowers along the rivers and read religious prayers. When the contents of the boiler are boiled, the steam pours it out of the pipes into a large copper pit that is in the cold water. When these vapors are cooled, the rosewater is produced.

The packs, depending on their capacity, provide about 30 to 40 kilos of rosewater. For a flower flavor, too, a very thin layer of oil on the rosewater should be removed with a syringe. If you want to have a very special rosewater, then you should re-boil the rosewater in the boilers.

Tourists from all over Iran and the world will come to this city during the time of the rosewater festival in Kashan to witness this beautiful process at Niyasar. The festival is also appreciated by sample rhubarbs that produce high-quality rose water and you can also buy rosewaters as Iranian souvenirs.

Reporters and officials are also present at the ceremony, as well as specimens of the region. Guests are also offered with freshly prepared syrups.