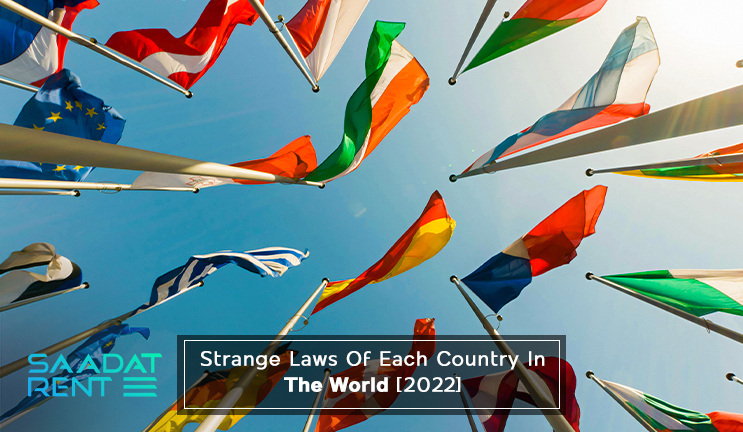 Strange laws of each country in the world (2022)

As you know, all the countries have some rules. Some of them are good but some of them are strange. We want to check the strange laws of each country.

Many of us are probably unaware of the strange laws that exist in some countries. Laws that are strictly enforced in one country and may not be the least important elsewhere. So we may have to pay huge fines or face severe punishment by doing a normal job in a city or country whose laws we are unfamiliar with. So you should know about the strange laws of each country in the world. There are some laws that when you hear that you will be shocked, but there are so important to their own country.

Dubai, one of the most popular tourist destinations in the Middle East, has some interesting and strange rules that may surprise you.

Eating and drinking are strictly forbidden in the entire fleet of the public transport system as well as in their stations; from the subway and bus to the pedestrian crossing. If you are arrested for eating or drinking in these places, you will have to pay a fine of 100 dirhams.

Despite the numerous sandstorms in the UAE, you might think that having a dirty and dirty car is normal and forgivable in this country.

Dirty cars, however, are considered "disgusting to the image of the city and public health." As a result, owners of such cars will have to pay fines of 3,000 dirhams.

In general, taking photos in the UAE is a dangerous job. If you see an accident on the street during your trip, you should not take a picture of it; this is just like photographing illegal military buildings, courts, and palaces. If you commit such a crime, you will have to pay 50,000 to 3 million dirhams and you will most likely be deported from this country.

Turkey is one of the best countries for traveling. It has lots of places for visiting. Before traveling there, you should know the strange laws of this country:

Because the Turks have a special interest in the lives of their city, anyone who picks them before the olives arrive will be fined more than $ 500 or, in some cases, even sentenced to two years in prison. So don't pick olives from trees before they ripen.

It is forbidden to consume alcohol on the streets of Turkey and also to sell it after 10 pm.

The amount of 50 lire or the same half-crouch is the cost of payment to public toilets in Turkey and the owners of health services are obliged to pay tax on their income.

Italy is one of the most popular countries in the world for travel. It is made up of the islands of Sicily and Sardinia in the Mediterranean Sea and the Italian peninsula. Before traveling to this beautiful country, let's look at its strange rules.

Venice is a tourist city and is usually very crowded. Therefore, people may feel tired while visiting and want to relieve their fatigue by sitting in the corner without knowing that they will have to pay a $ 588 fine. The local government has banned people from sitting in the area to keep them comfortable, as well as the tourists themselves, and tourists should visit cafes and restaurants if they want to relax.

Have you ever traveled to China? This country has a perfect culture. But it has some rules. Some rules are acceptable but some of them are not. You should know about the strange laws of this country before packing your things and buying tickets.

Do not be surprised if you see people in pajamas on the streets, restaurants, and shopping malls wearing pajamas instead of formal clothes or sportswear. It is very common to wear pajamas in this city and most people prefer to wear comfortable clothes to go to formal places instead of changing clothes.

The Chinese government has imposed heavy fines on those who indulge in food cravings, which is why some restaurants pre-weigh their customers before offering them weight-appropriate questions.

Another tourist country is Singapore. This country has strange laws too. So before traveling there, check all the rules and for enjoying your trip.

If you are traveling to Singapore, we suggest using mint pills to freshen your mouth and leave the gum in your home.

Another of the strangest laws in the world is related to Germany. It is illegal to run out of gas on the country's highways; every esteemed German citizen must anticipate and plan everything for them.

The strangest law in Denmark is that children go missing and their parents can not find them for 2 hours. Danish citizens can take custody of their children.

You should check and know about all the rules before traveling to some country. Strange laws of countries, are the thing that you should have information about them. So, before packing your thing, get a lot of information about that country and after that travel there.