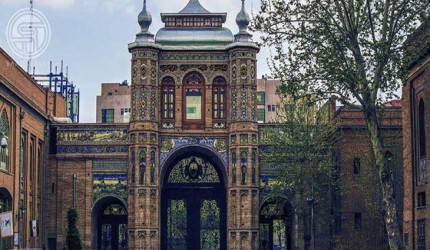 The National Garden; One of the oldest symbols of Tehran In the streets of Tehran, Imam Khomeini Street has a special m...

In the streets of Tehran, Imam Khomeini Street has a special mood. This street may be always busy and in traffic, but it has the most fundamental structures, and it can be said that it is the heart of the capital. The National Garden is one of the buildings on this street, which was known as the icon of the Tehran before the they create of Azadi Tower and is today one of the spectacular iran attractions.

The type of architecture and historical events that took place in Tehran Mashgh Square and its proximity of the Foreign Affairs Ministry made the National Garden more important.

As we said Mashgh Square and this beautiful courtyard are built in Qajar dynasty. The square area was a military area and the Imperial military force practiced there, and this site was built at the time of Fath Ali Shah for this purpose.

This area also had a central barrack, which the military forces were organizing there at that time, and therefore became known as the Mashgh Square. This Square was constructed during the period of Fath Ali Shah Qajar and was launched during Nasir al-Din Shah period.

At that time, a beautiful gate was constructed for the Mashgh square, which comprised with a two-arched door in south-eastern side of the field, and was known as the Naseri door, where in some days Nasir al-Din Shah, from above, Watched the military.

After the 1299 coup, the military troops trained outside the city, and this field practically lost its military use and wasted. Reza Shah Pahlavi, who was the Minister of War at that time, ordered too built  the National Garden.

The National Garden is one of the architectural monuments of iran that everybody should visit when in their iran tour, which is a combination of Iranian and European architectural style and is more visible in paving and tilework.

The National garden base, its eight columns and the legs of the pillars are made of brick. The exterior inscriptions are decorated with poems and in its tiling design they used two lions, leopards, lions and sun and machine guns.

Also there is a cavalry gate and two gates for walking people on the side of the National Gardens. This door is made of cast iron.

The building, which was originally intended as the gateway to the Mashgh Square, after a long time after its construction, the plan to create the first park or public garden in the city of Tehran was landed on this Square, and after that the name of the gate changed to the National Garden.

But this national garden was not long lasting, and inside its area they constructed the National Museum of iran, the building of the Foreign Affairs Ministry of Iran and the National Library and other, but the name of the garden over the square gate remained, and the National Garden remained as a sign and symbol of that era of Iranian history.

More information about The National Garden: