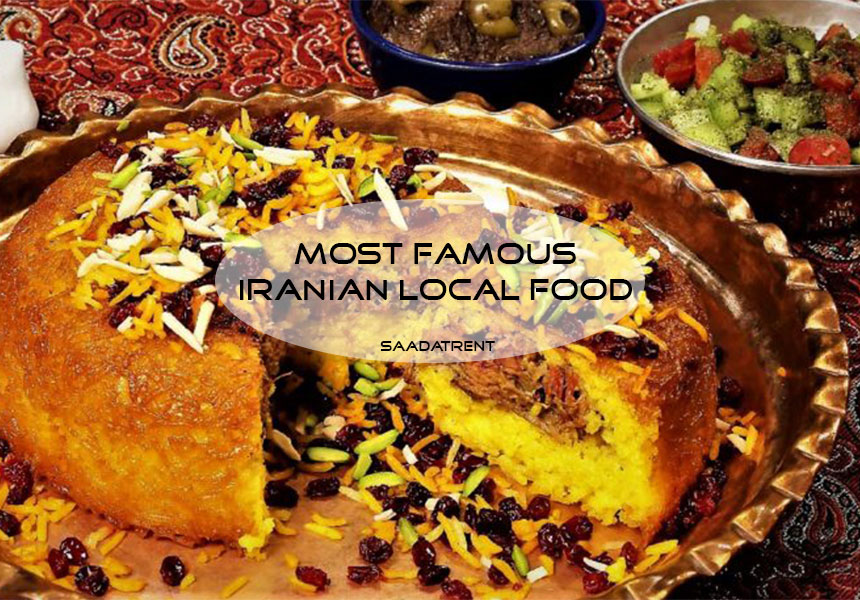 Local food in Iran has a wide variety that everyone will fall in love with at least one Iran traditional food. we are going to read about top Iranian local food

The most famous local food in Iran

Whenever you travel to any part of Iran, you will find relatives who have delicious traditional food due to their nature and culture. Among the thousands of local and traditional dishes, some are more popular than other dishes due to their excellent taste. Even their reputation of them has arrived in foreign countries.

Iran is very culturally diverse, and wherever you travel in this land, you will encounter culture, cooking, food, and special customs. This diversity has made Iran attractive to foreign tourists. For tourists, Iran is a destination for sightseeing and trying new and delicious food.

Today, we want to introduce you to some of the most delicious local dishes in Iran, which have become very popular among foreign tourists. Of course, every city and town in our beloved Iran certainly has very delicious food and snacks, but in this article, we can only mention a few of them.

Iran is very diverse in terms of history and you will encounter culture, cooking, food, and special customs in every corner of this land. This diversity has attracted many foreign tourists and advanced Iran tourism.

Iran is a destination for tourists to try new and delicious cuisine. Today, we plan to introduce some of the most delicious local food in Iran, which has become popular among foreign tourists. Of course, every city and village in Iran certainly has a lot of delicious Iranian food, but we can only mention a few of them in this article. What do you think these foods are?

If you think that you know the local food of Tehran, the capital of Iran, you should think more.

Tehran is an ancient city that has been the political and economic capital of Iran since the Qajar period and has been embracing many immigrants every year. Different cultures live in Tehran, and perhaps this diversity in culture and traditions makes it difficult to find Tehran's traditional cuisine from other cities and countries.

There is some local Iranian food among the main people of Tehran. Dampokhtak, Sar gonjeshki, Eshkene, and some of the stews are considered to be traditional food in Tehran.

Koofteh Tabrizi is the most famous Iranian food in this province that is a language that is almost representative of everyone's presence.

If you want to list the best Iranian food, do not doubt that Koofteh Tabrizi is among the Top five cuisine on this list.

This Iranian food has become one of the most appetizing cuisines in Iran and Azerbaijan. Of course, Azerbaijan Bonab Kabab with its misty smell is another delicious and famous dish in this province.

Many tourists who travel to Iran are bound to visit Isfahan in their Iran tour. For this reason, it is not surprising that You see Isfahan traditional food on the list of the most popular local Iranian food. Biriyani is one of the traditional foods of Isfahan that is so popular in this city that there are special restaurants for selling this food.

Biryani is cooked from a combination of lamb, white liver, tusks, and spices, and is often served with fresh bread and cool dough.

One of the local Iranian food, which has gained popularity among foreign tourists, is Kalam Polo. This food belongs to Shiraz and the surrounding areas and because of the fame of this city, many foreign tourists try this delicious meal.

For Cooking Kalam Polo, they combine chopped cabbage with all kinds of aromatic herbs and rice. This is a very tasty meal, and you can eat it with Shirazi salad, pickles, and vegetables.

One of the local Iranian food is Beh Aloo stew, which is so famous in this province and Yazd city. This delicious stew has a strangely sweet and savory flavor that makes it a special meal.

You can also try Koofteh Yazdi and Ash-e Aloo which are other delicious Iranian food that belongs to this ancient city.

Iran's northern cities are well-known and famous for the origin of various delicious foods.

From Iranian food without rice such as Baqala ghatogh, Kal Kebab, and Mirza Qasemi to various types of stews that can be eaten with rice, such as Sir Qalyeh, Anarbij, and Gilani Torshi Tareh.

This lush and temperate region has another interesting food called Vavishka. Besides that, you can eat delicious fish in these cities, which is cooked in different ways and different flavors.

The first Mashhad local Iranian food that is world-renowned is Shandiz shashlik Kebab, which is made from six pieces of sheep meat, which has a great taste. Mashhadi Shole is another traditional Mashhad dish.

The local and delicious Iranian food of Qazvin is a food that everyone falls in love with it. Qty Nesar was considered to be part of a luxury dish in Qazvin that was only served at ceremonies and weddings.

Boz Qormeh is one of the most delicious stews in Kerman that is named by this name because of the goat meat in it (gad is named Boz in Farsi!).

If you are looking for a very different and delicious traditional meal, we suggest you try this Iranian food. Also, you can try Kerman's most delicious and oldest food, Oomaj Ash.

In the variety of Khuzestan cuisine, it is enough to say that many kinds of fish, falafel, Opiosi (Dezful Eshkene, Bango (Yogurt and Cucumbers), Ashe- Ardeh, Hariseh (Halim), Shorba, Samosa (especially from Abadan), Shrimp and ... are only part of the traditional Iranian food of this province.

But we suggest that when you travel to this historic province, make sure you try Qalye Mahi.

Ashe Ardeh (Ardeh Polo), unlike its name, is not watery Iranian food, and it does not have any similarities to common Foods named Ash in the country and is considered to be delicious traditional food of the Khuzestan province. Ashe Ardeh belongs to the Dezful city.

Hamedan also has a variety of delicious Iranian food. From tasty barbecues and Kebabs to different kinds of Ash and soup.

If you arrive at Hamadan and want to try a special food, ask for Sardashi kebab from this city’s people. Sardashi Kebab is one of the most famous and amazing Iranian food in this province that has many lovers from all over Iran.