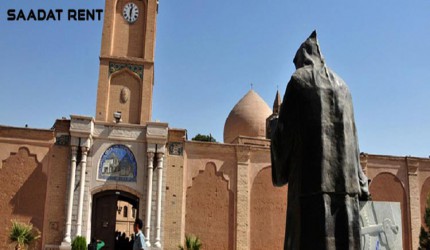 Most famous churches in Iran Since Parthians, Christianity and the invitation to this heavenly religion have been forme...

Most famous churches in Iran

Since Parthians, Christianity and the invitation to this heavenly religion have been formed in Iran, and some people have turned to it. At the same time, the worship houses of this religion’s followers came to the corners of Iran, and each was built in a manner.

Churches, as a symbol of the world of Christianity, were beautifully decorated and exhibited unique architectural effects. Today there are nearly 600 churches in Iran, 90 of them are listed on national monuments, and 3 churches are also known as world heritage sites.

Some of these churches are one of the unique examples of Christian religious buildings around the world and are referred to as architectural patterns. We would like to invite you to see some of these beautiful buildings so stay with us in this iran tourism blog.

Qareh Kelisa or St. Thaddeus Monastery is a black and white stone building, listed in the UNESCO World Heritage site, and is one of the most valuable religious buildings in Christianity. According to the Armenian beliefs, St. Thaddeus Monastery is the first church built on the order of the messengers and apostles of Christ in the world and known as the first cathedral of the world of Christianity. The name of this church comes from the name of one of the apostles of Jesus Christ who entered the northwest of Iran in the year 40 or 43 in a city called Ardaz (Artaz) and was martyred in this way.

Christianity believes that martyrdom is the greatest happiness for mankind, and therefore every year in the last days of the month of July and the first week of August there is a special ceremony to which the Armenians and a number of ambassadors from the Christian countries participate in Iran.

Saint Stepanos Monastery | A church in the heart of the mountain

The Saint Stepanos Monastery is the second most important Armenian church in Iran after the St. Thaddeus Monastery and its name are on the World Heritage List too. This church was built in the ninth century but was seriously damaged by a severe earthquake and was restored during the Safavid period.

The holy Stefan (Saint Stepan) is the first martyrs of the road and the religion of Christianity and is one of the apostles of Christ and the first missionaries of parochialism, and there are many churches all over the world with the same name. He was stoned to death on December 26, 36, in Jerusalem, on charges of rendering a speech contrary to Jewish law.

The Saint Stepanos Monastery is respected by all Christians and almost all religions, but in fact, belongs to the Gregorian Christians (Greek Gregorian followers) who reside in Armenia. In one day of the year, thousands of Armenians gather at this point to take their special ceremonies along with their pilgrimage.

This beautiful church is surrounded by beautiful nature in the heart of the mountains of the region between the border region of Jolfa and the Republic of Azerbaijan and at the confluence of the river Aras and on the slopes of Mahgard that you can go ther with your personal car or using car rental iran services, and according to the same geographical location in the sources of Armenian books (Dir Maaghard) It is said. you can read about this monastery in this blog: Saint Stepanos Monastery

Vank Cathedral | A church in the half the world

Vank Church is one of the Armenian churches of Isfahan, which belongs to the time of Shah Abbas II. Vanak word is used in the Armenian language as a monastery. This church is renowned for Amna-Perkich among Armenian compatriots that means the Holy Savior Church.

At the top of the entry door of Vank church, a bell tower is located on three floors, on the second floor a clock with a weight of three hundred kilograms is seen. This bell tower and its clock belong to 1931 and a gift from a person named Mardiros Hordananian.

Some of the characteristics of Wank have made it different from other ancient Armenian churches:

All walls and corners of the church are decorated with paintings of the Holy Gospel and images from the birth to the ascension of Jesus Christ, the Day of Doom, and Paradise and Inferno. read more about vank church here: Vank Cathedral; the most Important church in Isfahan

Russians, During the occupation of Qazvin, left a red-colored footprint of Christianity in this city. They built a small church in Qazvin, which is easily recognizable in its red bricks and turquoise dome tiles. The church, also known as the Bell Tower, has a four-sided plan, a large dome in the center of the chapel and a smaller dome above its altar.

The Russian crosses, on both sides walls of the only entrance door, featured the nationality of its makers. At the top of the entrance, there is a three-floor brick house with a small dome over it.
The large pillars of the outer walls four corners are designed to double the beauty of the church, and its carpet yard looks so magnificent as it is. if you want to know more about Cantor church here is its blog:  Cantor Church in Qazvin

Saint Sarkis Cathedral is the largest church in Tehran, with dimensions of 36.5 meters in length and 17.8 meters in width, and is the cathedral of the capital. Holy Sarkis was one of the saints of the Armenian Apostolic Church, who was prosecuted for Christianity in the early 4th century and was eventually killed.

Inside the church, there is a cross-linked plan, and along with glass windows that tell religious stories, they have created a space full of Christian signs. Exterior walls look very simple and are covered with white marble, but the lighting on them at night creates a special effect.

The interior walls and the ceiling are covered with plaster, and among its white, the paintings with the theme of Jesus' baptism, the crucifixion, the ascension of Christ and .... depict stories of Christianity. The church has several sections, including a chapel, a sanctuary, a place for musicians, a baptism bunker and two private rooms that are fitted for different needs.

Chapel of Dzordzor | The church that was moved

Near the town of Maku, a historic temple places itself in the crater of the valley where the snake river passes through and falls into a beautiful silence. The Church of the Virgin Mary, known as Zurzor, displays one of the most unique images for you.
The appearance of this church is very simple but valuable and has attracted the attention of the world and many tourists in their iran tours due to its registration in the UNESCO World Heritage List. Zurzor was a place where a person named Hwens Zurzortesi that teaches his knowledge there.

During the course of his work, he was able to train 12 clerics with a world-wide reputation in Catholic churches, including the Bishop of Hovens, who, in 1330, became Archbishop and was headed by the Kerna Scientific Center (an important center of the Catholic Church in Nakhichevan region). After the death of  Zurzortesi in 1338 AD, this center lost its prosperity and became a religious center.

One of the important points about this church is that its construction is not in its original place and has been displaced throughout history. In the year 1366, a project called Baron Reservoir Dam had started. This dam was used to supply water to the fields of the Maku plain. According to work plans, the church was submerged upon completion of the work and dewatering the lake. To maintain this valuable building, the Executive Directorate of the Cultural Heritage Organization decided to move the church to a safe place. This shift is considered one of the most important events in the history of preserving the country's cultural and historical heritage, which has not yet been repeated.

All about Iranian ceremonies and festivals Iranian culture is one of the thousands of reasons that...

Most famous churches in Iran Since Parthians, Christianity and the invitation to this heavenly reli...