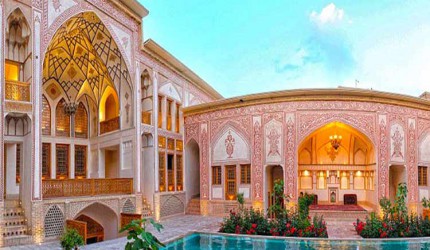 Iranian Historical Hotels; an overview of Iran ancient architecture Imagine you are traveling to a historical city like...

Imagine you are traveling to a historical city like Yazd that is one of the important cities in iran tourism. A city that is also registered in the UNESCO world heritage site because of its ancient textile. Now, which one do you prefer? Staying is Modern hotel like all the hotels you can find in other cities in the world, from Tehran to New York and Seoul, or you preferred to stay in an old and historical hotel with old textile that belongs to more than 1000 years ago and experience a dreamy stay. Of course, the second one.

Travelers generally prefer staying in old places, historic homes, and hotels elsewhere, and most of the times, staying in these hotels are one of the motivations for traveling to that city. Imagine not only you have traveled to a historic city, with unique iranian architecture, you also stayed in one of those historic houses and your journey of devotion becomes complete.

In Iran, you can find these hotels in three cities of Isfahan, Yazd, and Kashan. These three cities, which are full of history that is not damaged at all, have had the opportunity to turn some of them into a hotel, which, can save the old buildings from the destruction, and also makes the city more attractive to domestic and foreign tourists.
So, if you are attracted to stay in an ancient hotel, even in one night, DO NOT miss this article at all because we are going to introduce the old houses and buildings in Iran that become a historic hotel every year many tourists stay in them in their iran tour.

After three years of renovation, this house was put into operation and by completing its equipment and facilities, it reached the standard level of the world's hotels. Special features of this hotel include water storage, which has become a house movie. This hotel's rooms offer guests a memorable stay with a view of the hotel's courtyard and a pond and of course beautiful gardens.

Isfahan traditional hotel is a historic monument belongs to the Safavid dynasty, in four hundred years ago. This hotel is located in an old alleyway in the heart of the city's historic texture and close to shopping centers. When you enter this hotel, you feel like you entered a museum, its rooms, just like the old houses of Isfahan, have been surrounded by a large courtyard, in the middle of which there are a pond and water fountains that make it feel like a home.

This hotel is close to Chahar Bagh Square and Naqsh-e Jahan Square, and the main tourist and historical points of the city have added to its attraction. The Isfahan traditional hotel brings with its calm, authentic, modern facilities the experience of staying in old Iranian homes and familiarity with the traditions of the past for the travelers.

The 400-year-old Caravanserai Hotel belongs to the Safavid dynasty, which has also hosted Qajar period travelers with its numerous rooms. This mansion is one of the oldest resorts in Iran. Although old, it is comfortable and cozy and has all the amenities of a good hotel.

You can have moments of pleasure in its traditional tea house or in the gardens that have all kinds of fruit trees. This hotel is located in an authentic neighborhood called Sonbolestan in the north of Isfahan.

At 60 km of Isfahan-Nain road, Abbasi Caravanserai is located in the foothills. This building belongs to the Safavid period. So you will be in a completely historical place and you will experience life like the people who lived a hundred years ago.

This hotel atmosphere and the architecture of the rooms are so charming and unique that will catch you at the time of your arrival. The facilities of the hotel are in keeping with the needs of today's travelers. Traditional dining, multi-purpose halls for organizing various conferences, amusement arcades, Iranian handicrafts shops, and more. Abbasi Caravanserai Hotel is close to some of the attractions such as the old foothills bazaar, Sandy Varzaneh hills, Gavkhuni wetland, and so on.

The Ameriha house, which is a hotel today, belongs to the Ameri family, and the time of its construction is related to the Zand period. This house is actually made up of several houses and is one of the oldest houses in Kashan.

Kashan is home to many historical houses. Living in this beautiful and magnificent peaceful house will make an unforgettable memory for you. the sound of water, the combination of sun, wind, and leaves of the trees, and the awesomeness of the house itself, which is tough but appealing, will only create a product in the name of tranquility in the passenger.

Most of the old Yazd hotels belong to the Qajar period, but the traditional Vali hotel is older than all of them and belongs to the Safavid era. The Vali Hotel belongs to more than 400 years and represents the architecture of that era.

The interior and exterior and vestibule with plastering, Narenjestan and the cradle that the water is flowing in it and revitalizing the Qanat way, and the courtyard and the large pool in the middle of it are some of the hotel's attractions. The hotel is located in the historic Amir Chakhmaq complex, making it easy to access the old texture. Its roof is also available for its passengers and has a vast landscape of its historic texture and windsurfing.

Fahadan Hotel also referred to as the museum, is located near the Jameh mosque of Yazd and in the heart of the Fahadan neighborhood, the most spectacular neighborhood in Yazd. Fahadan Hotel is a historical and 250-year-old monument belonging to the Qajar era, which is also known as the Tehrani House and is listed on the list of cultural heritage monuments.

The unique features of this hotel are the treasures of the historic and old works, the central courtyard and the Narenjestan, which is changed to the cafe and restaurant. The hotel building consists of three courtyards including the main courtyard, Narenjestan, and Kolah Farangi mansion, three beautiful windsurfing, a large hall, a good house, and a large roof overlooking the historic fabric of Yazd.

Malek Al-Tojar Traditional Hotel is one of the most spectacular buildings in Yazd. In the past, this house belonged to Haj Ali Askar Shirazi who has been a well-known businessman of the city. Malek al-Tojar hotel belongs to the Qajar era and is located in one of the oldest neighborhoods of the city. Malek Al-Tojar Traditional Hotel is composed of several rooms; each room is different from one another. The walls and ceiling of most rooms are decorated with paintings like the mansion of Narjenshestan Shiraz.

Beautiful entrance, hexagonal hemicycle, winter, summer, springtime, royal palace, amazing wooden columns, courtyard, mirror room, windpipe and large pool and underground corridors that connect different parts of the building, including the assets of Malek Al-Tojar hotel with its popularity with Iranian and foreign cuisine. The traditional Malek Al-Tojar Hotel is one of the most popular destinations for its original architecture of Yazd, as well as its proximity to the city center and market.

The building of the Motevalli Bashi Traditional Hotel is about 180 years old and you feel like you are staying in a tourist attraction instead of a hotel. In this place, you will find an interesting combination of tradition and modernity. For example, in the rooms of the hotel, which have a completely traditional space, you can use the Internet.

Breakfast is served in the hotel free of charge. The garden and the greenery of the hotel are so beautiful that it makes it difficult for you to get out of the hotel. Walking in a beautiful walk in a traditional Iranian garden is not something that one can easily ignore.

Mahinestan Raheb Hotel is a historic residence located in the neighborhood of Kashan Garden. This old house belongs to the middle of the Qajar period. This residence is originally the home of Yelani King and has a complete historical context.

Despite its historic space and texture, the Mahinestan Raheb Hotel has modern facilities, and the combination of these two opposing elements is an exciting experience for travelers. For example, the use of free internet in the chamber and the Shah neshin and the summer and winter portions are experiences that are not commonly found in daily life. The Cultural Heritage Organization has chosen this building as the most luxurious historic residence.

In this article, we will introduce you to the best Iran hotels that you can choose to stay in, while...

A traditional stay in Toranjestan hotel

Iranian Historical Hotels; an overview of Iran ancient architecture Imagine you are traveling to a...

A traditional stay in Toranjestan hotel

Shaarbaf hotel; a great choice for staying in Iran