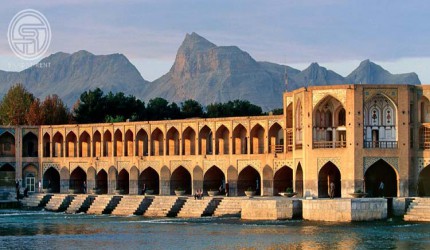 Khaju bridge in Isfahan Khaju bridge, a memorial to the Shah Abbas II settlements, with its functions such as the dam a...

Khaju bridge, a memorial to the Shah Abbas II settlements, with its functions such as the dam and the regulation of the flow of water, has been a masterpiece in building bridges in its era.

Khaju Bridge is located in Isfahan and on the Zayandehrud, in the east side of Si o se pol. This bridge, which had many names throughout the ages, has become one of the eye-catching iran attractions in terms of its symmetry, strength, and architectural style.

According to archaeologists, Khaju Bridge has been built on a bridge that had already been destroyed.

Tourists who come to Isfahan in different periods, all admire the Khaju Bridge and have considered this place as the permanent masterpieces of Islamic and iranian architecture.

Khaju bridge, which was one of the most beautiful bridges in the Safavid period, was built by the order of Shah Abbas II. The length of the bridge is 133 meters and its width is 12 meters, which, with many tiles and decorations, is one of the most outstanding works of Isfahan.

In the middle of the Khaju bridge, a special building has been erected for temporary residence of the king and royal family. According to historians and scholars who studied the Safavid dynasty, the purpose of Shah Abbas II for building Khaju Bridge was connecting two Khaju neighborhoods and the Hasan Abad gate with the Shiraz road.

Khaju Bridge is a dam bridge type, and according to some, it is considered the pinnacle of the bridge industry in Iran.

Khaju bridge can raise water up to 6 meters high. It also has 16 drainage valves, with slabs in its body, as well as drains that can raise and lower the valves. By up and down the drawer, they will be able to adjust the volume of the water that flows, also these drains set the water collecting behind the bridge.

The Khaju Bridge has 24 openings that are made of crafted cubes. Between each of the eastern and western sides of the bridge, a building has been built consisting of several rooms decorated with paintings.

This building, called “Shah Neshin” or alcove, was the place of elders and emirs who were called to watch the swimming and sailing competitions on an artificial lake there.

At the corners of the eastern side of Khaju Bridge, there are two stone lions, which appear to be the protector of Isfahan in the Safavid era.

Art, science, religion, philosophy, and engineering in iranian culture and history are full of beliefs to symmetrical phenomena and ideas. Certainly, the symmetrical forms of the artists and ancient creators’ hands have always been intentional and vigilant.

Khaju Bridge has a linear space organization that consists of repeating a series of spaces that are approximately the same size, form, and function.
Under the bridge, there are 21 halls separated by spacing and connected by an intermediate space.

Intermediate spaces are proportional in terms of length and width, and they play an essential role, for example, to create the space required to provide light and bridge visibility.