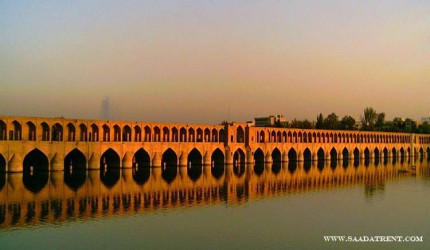 The Si-o-se-pol Bridge or the bridge of Allah Verdi Khan is one of the historical bridges of the province of Isfahan wit...

Si-o-se-pol Bridge is one of the historical monuments of Isfahan province, many of us know this beautiful city with this historic bridge.though today, with drying water, the Si-o-se-pol Bridge are no longer as impressive as the past, but this bridge is still known as one of the symbols of the city of Isfahan. If you know more about Iran, you will get acquainted with Iran tourism places.

The first idea of the construction of Si-o-se-pol Bridge in the year 1008 AH is the 12th anniversary of the reign of Shah Abbas I. The bridge was completed in 1011 AH under the supervision of Allahvardi Khan.

The architect of Si-o-se-pol Bridge was the master of Hussein Bana Isfahani, whose son made masterpieces like Sheikh Lotfollah Mosque. Esfahani proposed the construction of big bridge to construct the bridge, the idea was not discussed before.

Contrary to the fact that bridges are usually built in low-profile areas, he built the bridge to make the wider part of the Zayandeh-rud River, as this river section was built in shallow, broad, quiet surroundings with spectacular outlook. Three major types of materials have been used to build the bridge: the stone for the lower parts and the brick and mortar and plaster for the upper parts.

Sarouj is one of the oldest Iranian architects' initiatives that consists of clay, limestone, ash and linseed materials (eggs and peaches), and are made in special stages. According to experts from the Department of Geology and Cultural Heritage, the foundation and foundation of this bridge is made to increase its moisture, durability and strength, which is why in the long run water can not be damaged.

The lost beauties of Si-o-se-pol Bridge

Of course, for many years, the zayandeh-rood river has no water and may have diminished the beauty and grandeur of this bridge, but still many tourists are fascinated by its architecture and glory.

When the Zayandeh-rood River was full of water, people would go for boat riding to Si-o-se-pol Bridge.

You can go around cafes and restaurants around the bridge and create delicious moments for yourself. The green area beside this bridge is a great destination for the residents and guests of this city and you will always see a large crowd there. If you see there is a musician or a singer's bridge, do not be surprised, this is the Si-o-se-pol Bridge nights that make everyone feel full of feelings.

Just sit near the sunset so you can enjoy walking on the bridge and watching the sunset landscape, and share the happiness of the people who are gathered together and pride themselves.