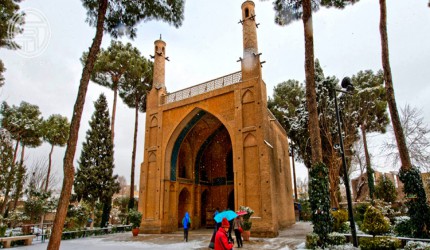 Menar Jonban in Isfahan Menar Jonban is an interesting and weird name that refers to movable minarets that the most fam...

Menar Jonban is an interesting and weird name that refers to movable minarets that the most famous one of them is in Isfahan that has an important place in iran tourism.

Menar Jonban was built in the 8th century AH, a monument with a dome roof which is an indicator of iranian architecture. In the bottom of the ceiling and just at the end of the building, the grave of Sheikh Amo Abdullah Karladani shines with its white tombstone.

The ceiling is covered with azure and turquoise tiles and catch every visitors’ eyes. On top of this building, there are two beautiful minarets, each with a height of 17.5 meters and a width of 9 meters.

The treacherous secret of the Menar Jonban is the fact that by shaking each of these minarets, the other minaret shakes clearly and visitors can watch the minarets shaking. Today in our Iran travel blog we will talk about this secret. So stay with us.

What is the real reason of Menar Jonban shaking?

Contrary to the public imagination and those who travel to iran and visit Menar Jonban for the first time, not only the minarets, but the whole building shakes. The reason for Menar Jonban shaking is the exacerbation or zeonas phenomenon.

If we want to explain it more simple, any physical molecule is moving, some are more mobile and some are less mobile. By shaking a minaret, another minaret, which is quite similar to that one, also moves and the force that pushed into a minaret is spread throughout the building and shakes the entire building.

Because of the light construction materials in the upper part of the Menar Jonban, the low altitude of the minarets, the distance between each minaret and the building, the wooden coils used in the upper and lower parts of each of the two minarets have all been made Minarets of Menar Jonban moving for many years.

The greatness of the Menar Jonban building and its low degree of shaking, make it hard to see the tremors of all the points, and only the minarets shake is easily seen, even more so because of each bell that is mounted on minarets shows their movement clearly.

For this reason, some people, may doubt that really the whole building of Menar Jonban shakes or not. The authorities devised a plan for this problem and placed signs in different parts of the Menar Jonban to make it easier for tourist who visits here in their iran tour to see the movement of the building.

As we mentioned, there are some signs in Menar Jonban that by looking at those signs, every visitor will notice all the elements of the building shakes, such as:

Amo Abdullah Karladani, is the one whose tomb is located below the porch of the Menar Jonban. There is not much information about his life, only the information we have about it is just what is written on his tomb:

This is the Sheikh Amo Abdullah ibn Muhammad ibn Mahmud grave. God bless him. He died in the seventeenth Dhi al-Hijah in 716
Some residents of Isfahan believe that the trembling of the Menar Jonban is due to the greatness and glory of Amo Abdullah, and he was a very high-profile person.