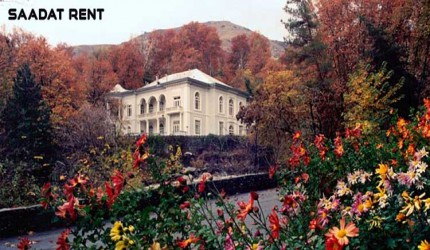 If we decide to make a list of Tehran symbols in iran tourism, then Sa'dabad complex is at the top of the list. All tourists who travel to Tehran, they will visit Sa'dabad complex at least once in their tour. Sa'dabad complex is very beautiful in the spring, but this beautiful garden, located on the Alborz slope, has its own beauty in the winter and does not disappoint its visitors.

In this article, we are going to tell you about Sa'dabad complex, its history, and its spectacular views and monuments. If you have not already gone to this complex, this article will make you want to visit this attraction as soon as possible. So, make sure you have put this palace in your iran tour itinerary and visit this symbol of Tehran. And if you've already been there, you might miss some points and would like to go back there.

Sa'dabad complex is located in the northernmost point of Tehran, on the slopes of the Alborz Mountains. Once upon a time, Tehran was so different from today, and northern Tehran was actually a village with very temperate and fresh weather away from the city. The Qajar kings built a palace in this village, and in the summers, which the city had a tumultuous heat, were a way for them to emigrate there. After the collapse of the Qajar dynasty during the first Pahlavi, Sa'dabad complex was the king's resort, and at the time of Pahlavi II, the royal family moved completely to this palace.

Currently, the Sa'dabad complex consists of 18 palaces, each of which in the past has been the exclusive palace of a member of the royal family. The oldest palace in this complex is Ahmad Shahi. Sa'dabad complex has an area of 180 hectares and is a full suite including streets surrounded by tall plantations, forests, rivers, greenhouses and garden plants.

Sa'dabad complex has many attractions and it takes approximately 4-5 hours for visiting every part of it. Sa'dabad complex first attraction is its beautiful area, with its tall trees surrounded by the streets of the complex, and the sounds of the birds are heard from their abyss. Jafarabad River passes through the palace and bungalows are built along this river. The presence of rivers and mountainous climates has created diverse vegetation in this complex. Currently, there are 7,500 valuable trees in the registration plate and a sample of plant species with a descriptive table. This garden is also home to several animal species.

In the southern part of Sa'dabad complex, there is a palace known as the Aswad museum due to the black stones used in it. This palace, used before the revolution as the court of ministries, changed after the revolution and became a museum of arts.

At Aswad Museum, Sa'dabad complex, works by contemporary Iranian artists are featured. The first floor is the house of the works of European artists from the nineteenth and twentieth centuries and on the second floor the paintings by Iranian painters from Zand, Afsharieh, and Qajar.

Among the works of Europe, there is a collection of very significant paintings such as Salvador Dali's Sleep. If you are interested in painting and art history, you will enjoy watching these works.

Sa'dabad complex during his long lifetime, has witnessed significant events, many of which have been recorded using photographs, films, and written documents, and have been publicly displayed at the Royal Documentation Museum today.

If you are interested in contemporary historical events, we suggest you visit this museum.

Mellat Museum with an area of about 5000 square meters is the largest palace in Sa'dabad complex. This palace with its white walls is also called the white palace. In this palace, that was the main residence of Mohammad Reza Pahlavi and his wife, there are several halls and ceremonial halls, in which the furnishings are very sophisticated and exquisite.

Arts of Nations Museum in the past was Farah Diba's exclusive museum at the Mellat palace. Paintings and volumetric works of Iranian and foreign artists have been featured at this museum in Sa'dabad complex.

The most famous building in Sa'dabad complex is the Green Palace, which is famous for its marble green look. It is said that the marble rocks used in the palace's wall are from the mines of Zanjan and the ruins of Shemiranat.

Sa'dabad complex has two floors and it was built at the time when Reza Shah was the Commander of the Revolutionary Guards. Later this palace was used as his residence and office.
The most famous place is the dining room where its seventy-meter rug is very beautiful and expensive, and the rest of its décor belongs to the French eighteenth century.

Visiting this museum is interesting for people interested in cooking and kitchens.

This museum was, in fact, the kitchen of the Sa'dabad complex, which was responsible for the supply of royal food and their guests. Today, the kitchen has become a museum with all its equipment.

Not only the objects inside this palace but also the building is very beautiful. This palace in Sa'dabad complex was Farah's summer residence and his office and is currently used to display the period of artworks.

This palace in Sa'dabad complex was built inspired by the Sassanid elements and the style of the German palaces and was formerly the residence of Shams Pahlavi.
The Museum of Anthropology Collections displays the lifestyle of the Iranian people, and its most prominent features are the costumes of Farah Diba, the former queen of Iran.

The Farshchian Museum is also a part of the Sa'dabad complex, which has been featured by this prominent master of traditional Persian painting.

The Museum of Hussein Behzad

The Museum of Hussein Behzad in Sa'dabad complex was built in a palace that was formerly called the crown prince's palace. In 1371 SH, the son of Professor Hossein Behzad, the most prominent Iranian artist, provided 290 pieces of his works to the Cultural Heritage Organization.

The organization elected the crown prince as the museum of Professor Hussein Behzad and opened the museum on his 100th birthday in Sa'dabad complex.

Other parts of the Sa'dabad complex

Museum of royal dishes, court weapons, royal clothing, military, green museum palace, which is very beautiful and eye-catching, water, Mir Emad handwriting and book, royal cars and Negarestan are other sights of Sa'dabad complex, you can visit them yourself.

To reach Sa'dabad complex, if you are using car rental iran services, then you should take Tajrish Square to Sa'dabad street and then go to Afraz and then Taheri Street and enter the palace through the western entrance. If you want to get to the palace with public vehicles, you must take a subway, bus or taxi to Tajrish Square and then follow the path that we are talking to Sa'dabad complex.

The Sa'dabad complex is very big, and inside it, van cars are provided for those who want to come directly to the palaces. So, if you're not into walking, you can feel comfortable.

There is also a cozy and beautiful coffee lounge for rest. After a long walk and a walk, you can enjoy the beauty of the gardens in the Sa'dabad complex cafe.