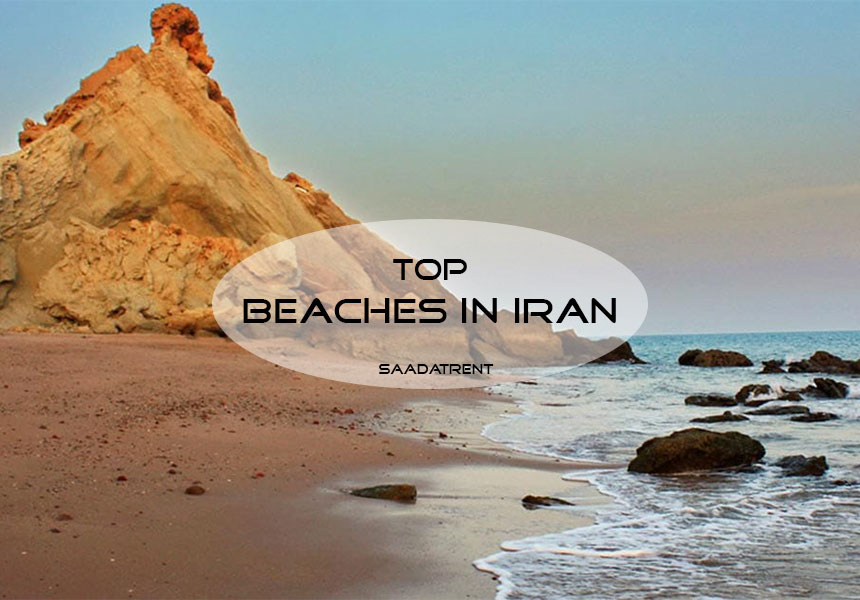 Top Iran beaches; You can't believe these beaches are in Iran

Top Iran beaches are waiting for you to travel to them and experience an unforgettable trip there. you can see the top beaches in the both and the south of Iran

Iran beaches can be considered as one of the most popular purposes of travel for all people and tourists in Iran. Iran besides its historical and architectural attractions, hosts people who want to lie on the golden or even red! sands of the Iran beaches or swim in the beautiful Persian gulf or Caspian sea.

You can find the best Iran beaches in the northern parts and also the southern parts of the country. each of these beaches has some special features that you can only find them there. like the northern beaches of Iran, on one side you have a blue sea and on the other side lush woods.

also in southern Iran beaches, more features will amaze you like the Confluence od desert and sea in Darak beach or the red sands of Hormuz island and many other things that we are going to read about them in this article. so don't miss this blog about top Iran beaches at all. 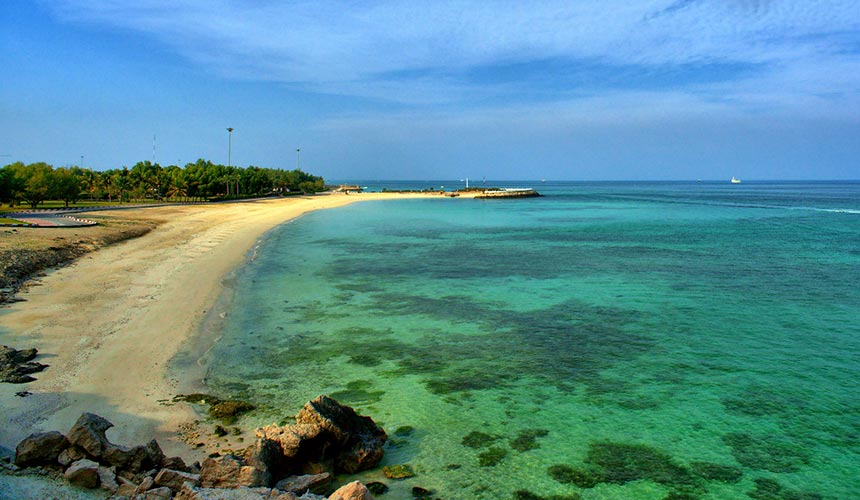 In this case, Iran beaches should not be forgotten. Iran is surrounded by the Caspian Sea to the north and the south with the Persian Gulf, that’s why Iran has many exciting and beautiful beaches in the north and south of the country and each has some special wonders for enthusiastic tourists who take an Iran tour. 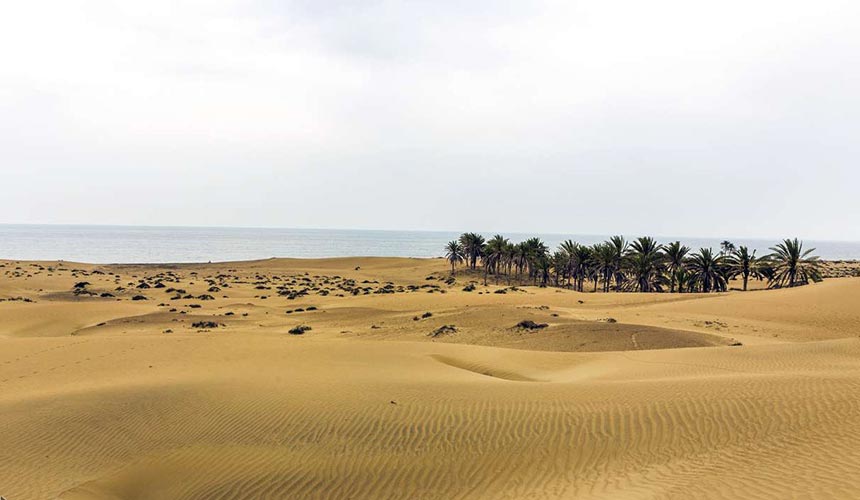 In this article, we are going to introduce you to the Top 5 Iran beaches. we go from the north to the south to get familiar with Iran beaches and their features and facilities that make them important in Iran tourism.

Iran beaches in the north of Iran

Iran northern cities which border the Caspian Sea, each has beautiful beaches, some of Iran beaches in the north of Iran are:

Many Iranian people believe that Chamkhaleh is the best of Iran beaches in northern Iran.

Chamkhaleh is located in the center of Langeroud city and when you enter the coastal road, the distance between the sea and the road is very small, which makes you think that in some parts, you are driving at sea. Chamkhaleh, after Anzali, is the second most prosperous and touristic city in Gilan and has the most beautiful beach among all Iran beaches in the north of the country.

the other beach is named in our top 5 Iran beaches is Anzali beach. What distinguishes the Anzali beach from other coastal cities of the Caspian Sea is the publicity of its coasts, which is accessible to all, while other beaches of the Caspian Sea between Iran beaches are occupied by the private sector, and respectable travelers must be behind the high walls and private villas look at the sea.

In Anzali beaches, such facilities like traditional and concrete basements, separate parts for men and women to swim, volleyball and beach football, parking lot, restroom, rescue, and other amenities for tourists are provided about 3 km from the coastal strip of the region and it is ready for tourists who want to have a good time in Iran beaches, especially in summer.

The access path to Anzali Beaches: you need to go to Gilan province and by following signboards you can reach Anzali.  Then in Pasdaran street, you can find the Caspian beach in Anzali.

The lifeguards, the altars, the resorts, the buffet, the shops, and the shower of water and sanitary facilities are some of the facilities of the Astara Coastal Beach between Iran beaches.

The access path to Astara Beaches: This beach is 7 km from Astara Road through Talesh, is located next to the Land will Forest protected area.

Iran beaches in the south of Iran 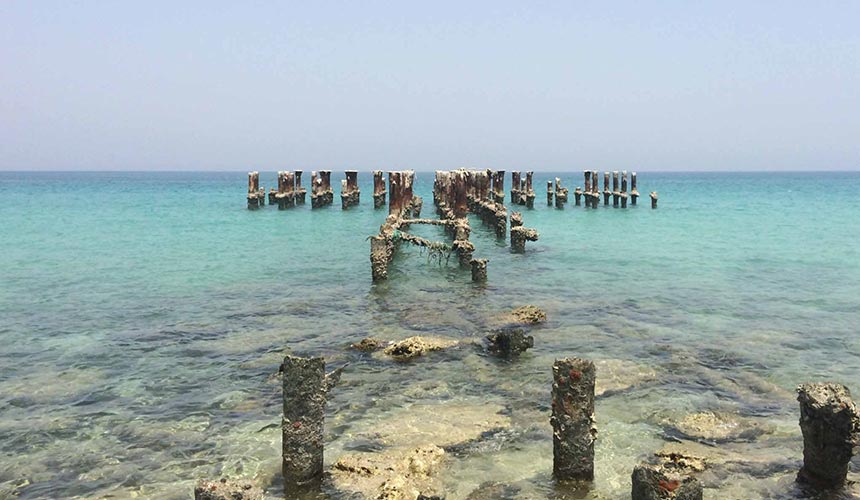 Most of the tourists who love to spend their time on the Iran beaches usually travel to the northern coast of the country. That is why the south coast of Iran is unique and it is really surprising that no attention is paid to them when they are more interesting and beautiful from the north of Iran. Some of the best Iran beaches in the south of Iran is:

In southern Iran, there is a port that is called Chabahar because of its spring weather. Chabahar is the only Iranian oceanic port located on the outskirts of the Oman and Indian Ocean. Chabahar is one of the most beautiful Iran beaches in southern Iran that has many unique sights.

In the southern port of Chabahar, the great rocks created a beautiful landscape by the advent of seawater and erosion of sedimentary rocks that is so rare between Iran beaches. Undoubtedly the sunset and sunrise of this beach can be considered one of the most spectacular views that anyone should watch in their life.

Access path to Chabahar beach: you can choose different flights to Chabahar from various cities. The other option is to train. By train, you can go to Zahedan, Kerman or Bandar Abbas and go to Chabahar. You can also use a car hire Iran services and visit this special beach from Iran beaches.

When it comes to the best Iran beaches, Kish Island has always been attractive to tourists, and therefore many Kish recreations focus on the beautiful coastal areas of the island. Among the beaches of Kish, you can do many activities like Parasol, Shuttle, fly board, Diving and many other ones besides swimming and taking a sunbath.

The best place you can find for maritime recreation is the ocean theme park in Kish Island. This park is the first water theme park in Iran, as well as the first open roof water park in Iran. It has 13 rides, 4 swimming pools, a spa and massage center, plus two restaurants, four places for drinks, and two large shops. This park between Iran beaches has a big space that allows for the full use of women.

The access path to Kish island beach: you can go to kish island by airplane and reach to Iran beaches there and the ocean theme park by taxi or car.

Have you heard anything about Hormoz Island? A land with red soil, the combination of red soil with the blue sea makes an amazing combination in front of your eyes. Hormoz Island and its beautiful Iran beaches attract more foreign tourists than Iranian tourists. 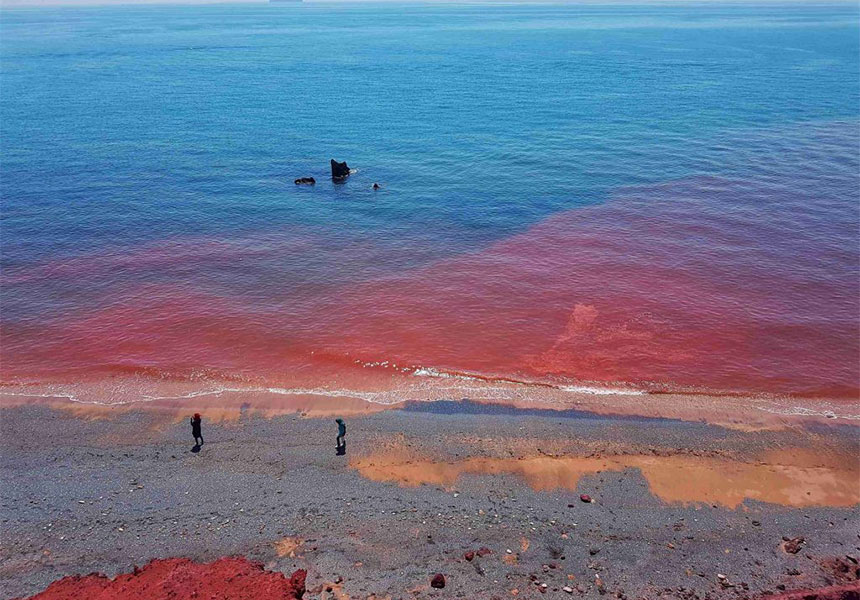 The reason for this color on the coast of Hormuz is the presence of special mineral compounds in the soil of this region. It is interesting to know that this soil has a very high economic value and is widely used in the manufacture of paints, cosmetics, and other items. 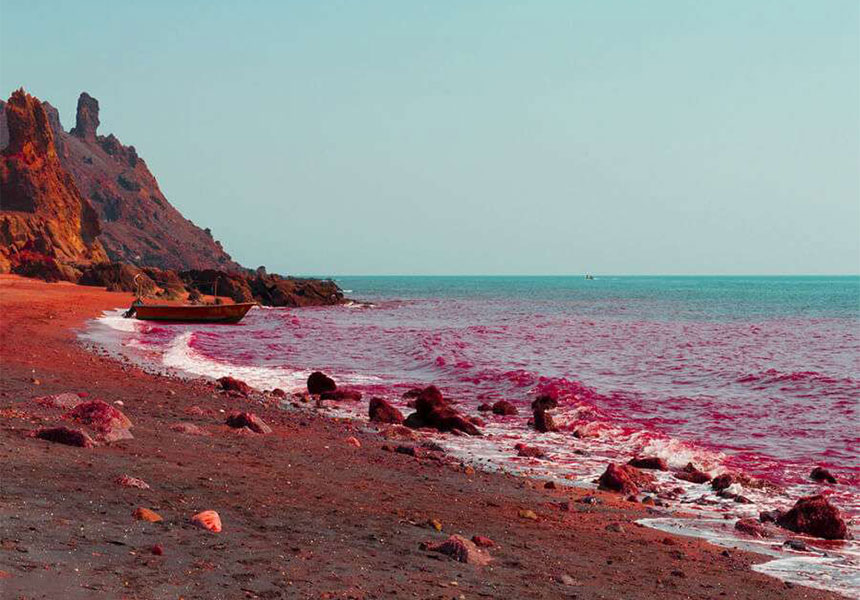 The element that makes the color of the soil of this island red is the element of iron. 70% of the soil in this area is composed of iron. The issue of this red soil becomes much more interesting for you if you know that this soil is used even in the field of cooking. The soil of this area is also used in cooking fish and bread and preparing pickles, jams, and sauces. 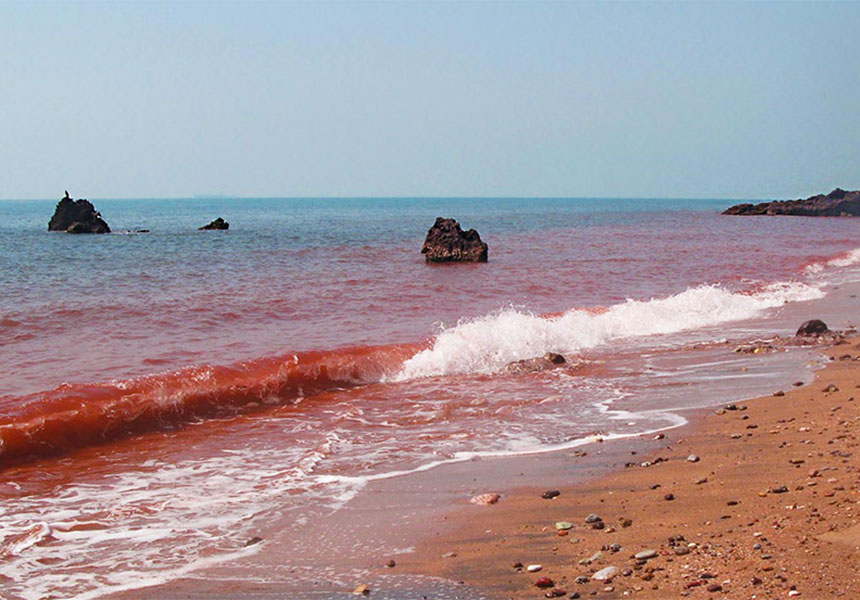 But aside from that, staying in this beautiful and fun area on the beach can be one of the most exciting experiences of your trip.

The access path to Qeshm island beach: To go to this area, you can first go to Bandar Abbas city by using a plane and from there go to Hormoz Island by boat. 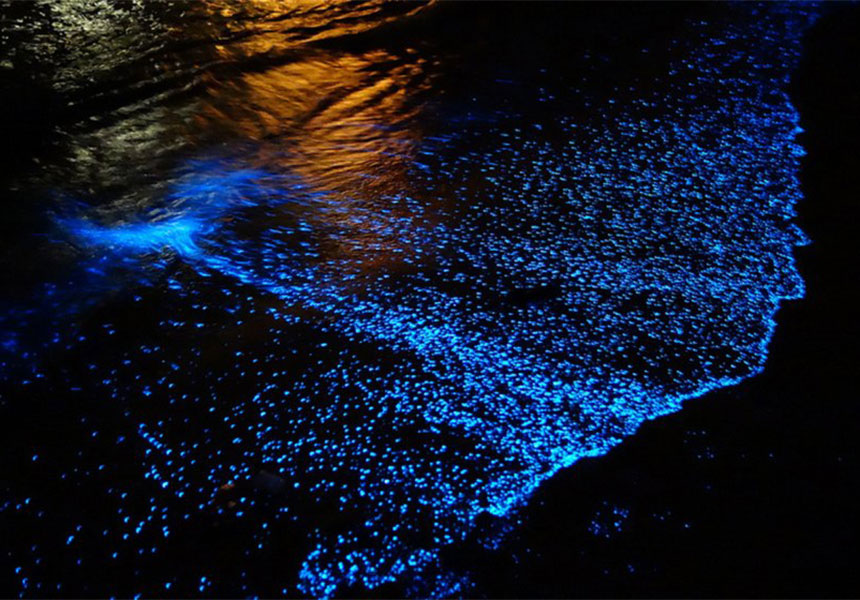 Hengam Beach is also known as the "Silver Beach" because of the plankton that creates a special view of the sea when the wave reaches the shore and the sun shines on them.

The access path to Hengam island beach: To visit these Iran beaches, you can first go to Bandar Abbas by plane and from there go to Hengam Island by boat.