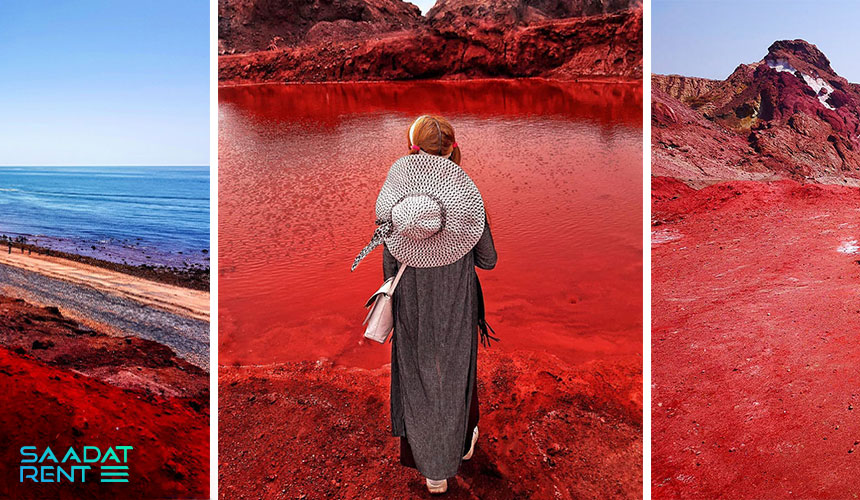 Hormuz island is one of the most extraordinary islands of Iran. It is called the rainbow island of Iran in the Persian Gulf. the first thing that everybody asks when they arrive on this island is, why is Hormuz island red? Here is a place full of colorful soils, beaches, and mountains. with unique beaches and a completely different culture so that you will feel that you enter another planet as you travel there. Hormuz Island is an island of colors and wonders that have come out of the sea. Here we are going to also talk about Hormuz island red beach.

The Hormuz island boasts spectacular landscapes from colorful soils to quaint architecture, with a fascinating story to hear and a sight to behold. you can also visit Hormuz tours 2021-2022 and other Iran tours by clicking here. and we will give you a useful travel guide for traveling to Hormuz island that you can use whenever you want to visit Hormuz island red beach and enjoy its phenomenal sightseeing.

Where is Hormuz island red beach?

At the bottom of the Iran map, between the Persian Gulf islands Hormuz island is located. Hormuz is not just an island, but it is the land of wonders; a red island that has come out of the sea. A thousand colors islands that every corner has a story to hear or something to see. Hormuz island red beach is awaiting you. 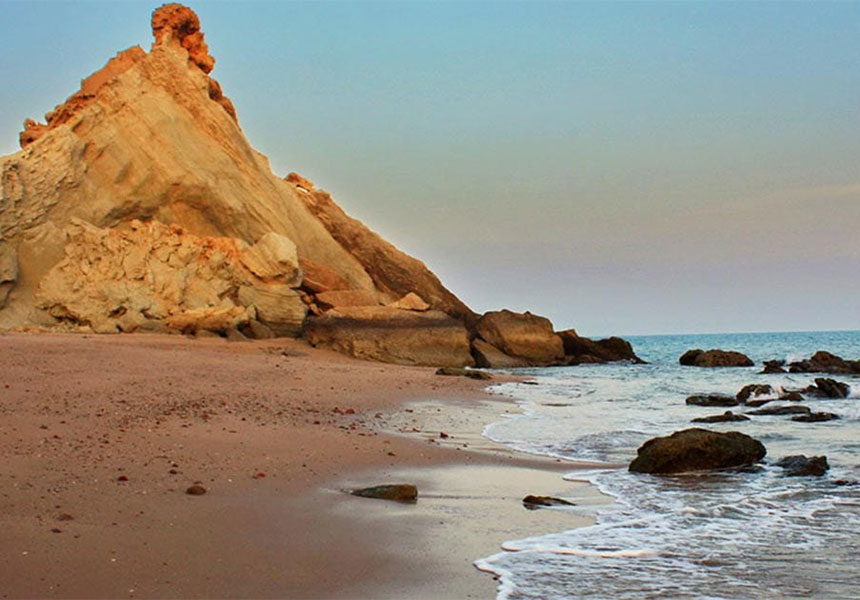 Hormuz is an island full of wonders. The land of colored soils. Where the redness of its soil and the sea become together. An island that says it's one of the places you should see before you die.

For reaching Hormuz island red beach, you should first go to BandarAbbas. You can go there by train or using car rental in Iran services or even the airplane. Then you should take lodge in Shahid Haqani pier and 40 minutes later you are in Hormuz island. 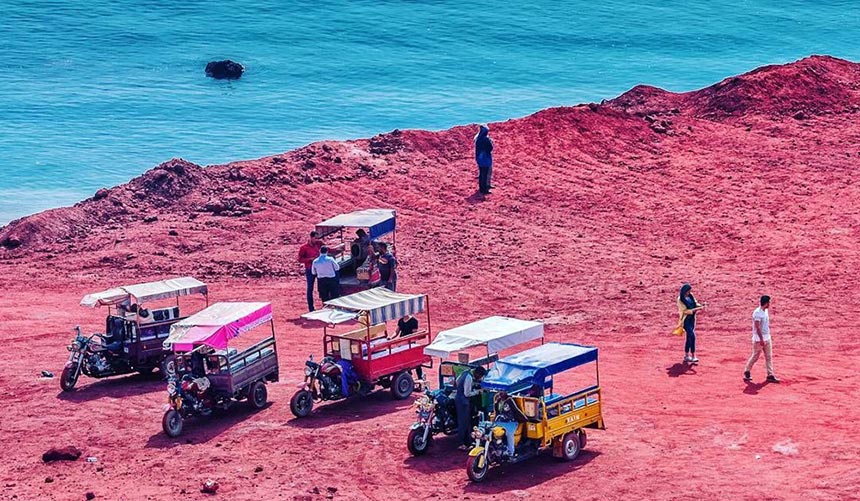 You can also go to BandarAbbas and go to Qeshm island and after that, reach Hormuz island by boat. In Bandar Abbas, you can reach the lodges and the quay boats, which go to Qeshm every 15 minutes from 4 am to 4 pm, and then go to Hormuz. 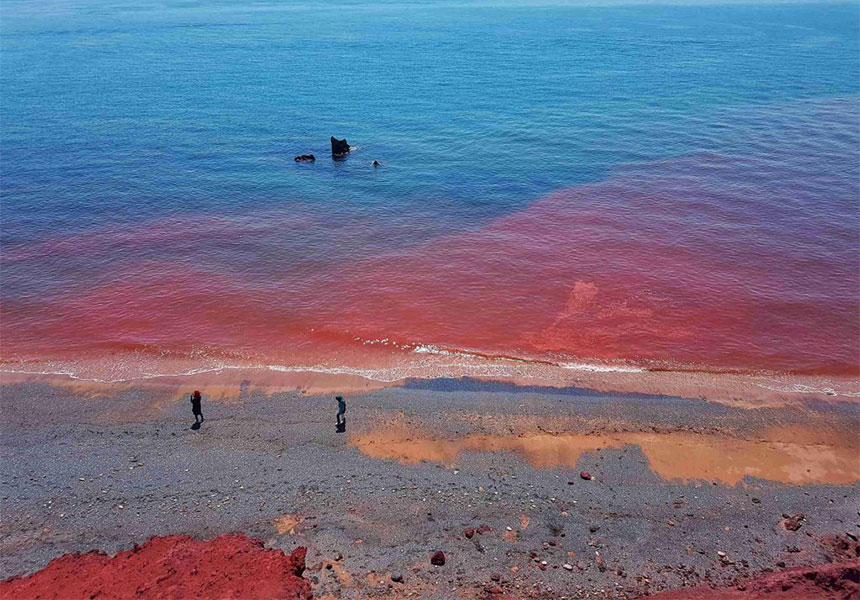 Where is Hormuz island?

Hormuz Island wasn’t known as a destination in Iran tourism in years and tourists when they wanted to travel to the Persian Gulf islands, would think of Qeshm or Kish island. 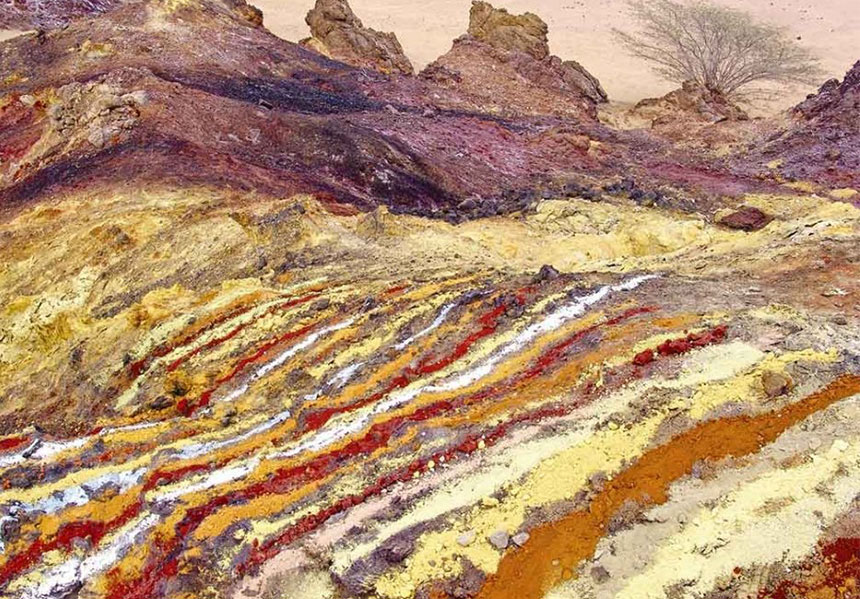 why is Hurmoz island red?

There are several islands in the Persian Gulf, one of which is located in Hormozgan province, the small island of Hormoz, which has a very special coast. On the coast of Hormoz Island, the water waves are red and you will be surprised to see this view. Hormoz Island has soils with different colors, especially red, due to the presence of minerals, and that is why is Hurmoz island red?

The red soil in this island has a high economic value and until recently, this soil was used in various industries of paint, cosmetics, glass, and ceramics, and this valuable soil was exported to other countries, which fortunately the export of this soil was restricted to prevent the loss of this unique soil.

Now that you know why is Hormuz island red, we should mention you can do various activities to explore this beautiful beach and see its attractions to create memorable moments for yourself. Enjoy being on the island by doing the following activities:

Why the color of Hormoz Island is red?

All the colors of the coast of Hormoz Island are caused by the presence of one element, and this element is iron oxide, which is present in 70% of the red soil of this island, and it has changed its color in this way. Hormoz Island is known as one of the largest red soil mines in the world and there are about 40,000 tons of which can be extracted 1800 tons per year.

you can eat the soil here!

You may have heard this talk and been surprised that the red soil of Hormuz can be eaten. If you have heard this sentence, we must say that it is true and the red soil of this region is edible and you can taste the soil of the beach and eat it. We have to say that there is no need for you to worry about eating this soil because if you do not taste this soil yourself, you will eat it in the local food of this region. This soil, which is known as Galak among the locals, is found in many spices of this region.

The people of this region use this soil to cook fish and bread and to prepare pickles, jams, and sauces as spices and create a special taste for their food. One of the famous foods of this region is called Suragh, which is cooked with these special spices and is very tasty.

But if you have a question about where these dyes come from, we have to give you the answer that these dyes are all the result of chemical composition and are the result of a combination of different minerals in which iron oxide is present. has it.
One of the stones found in this area is a golden metal stone called pyrite, which is known among the people as the gold of idiots or the eyes of the devil, in which iron sulfide is found in abundance.

when the first nature groups went to Hormuz and make albums with photos of colored soils and wonderful attractions, Hormuz island becomes more known and many Iran tours were held there, especially in winter. 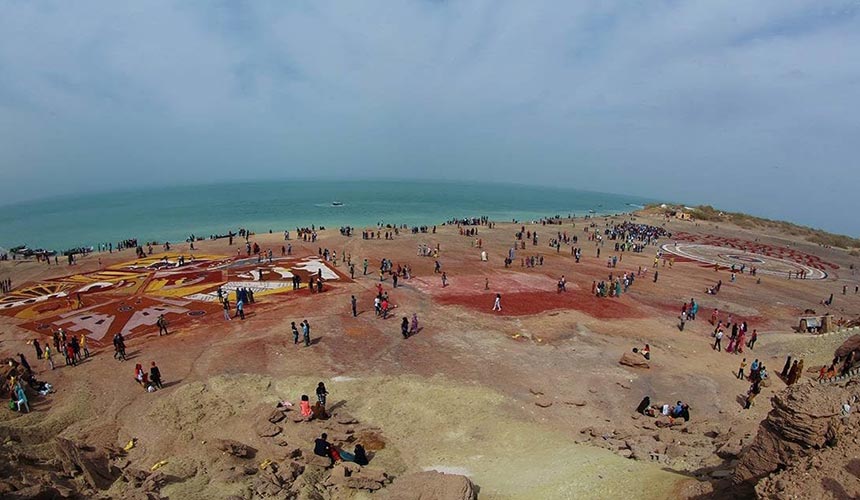 Why you should visit Hormuz island?

Traveling to Hormuz island brings a different experience for tourists, and maybe that's why they say that everybody should visit this island before they die. Surely you will ask what different experiences? It is only an island with a sea and a large cliff around.

But there is not only one sea and rock. Hormuz island is full of colors, from soils to rocks and mountains and corridors, all you see is red and orange, white and yellow colors and when you walk through them and winds up, it feels like you are in mysterious islands where it is completely different from everywhere.

Hormuz is an old island. The sources say this island is 600 million years old. The same sources say that Hormuz island had a brutal trade before the Mongols attacked. 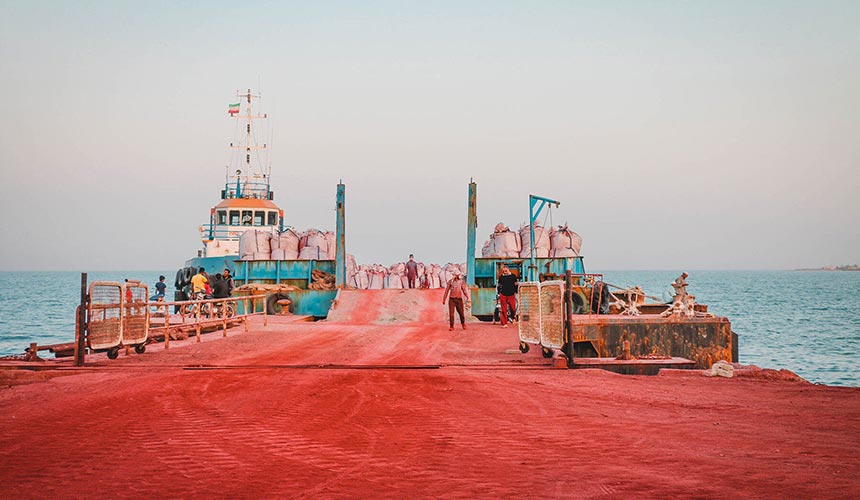 When the Mongols came, they took their homes and villages. Some people moved to Qeshm, and others moved to the Gambaron pier and built a city that they named Hormuz because of the name of that ancient city.

The best time to visit Hormuz island is in winter. Natural events like the migration of birds and turtles also occur in this season.

Where to stay on Hormuz island?

When you decide to travel to Hormuz island, you need to prepare yourself, because in Hormuz there is neither a shopping center nor a luxurious hotel. Everything is pristine and intact, and actually, this is what makes this island unique that there are no urban elements there.

If you prefer to stay in the locals’ houses on Hormuz island, you can ask for their traditional bread. This bread that is made with flour, oil, and Sooragh that is cooked with the edible red soil of Hormuz island is one of their Iranian traditional food.

There are other ways to stay on Hormuz island too. One way is to go to the shore and stay at low prices tracks that are made for passengers. There are also many traditional guesthouses that you can stay there at a suitable price. Another option is to go to Qeshm and stay in one of the Qeshm hotels.

Camping on Hormuz island is very popular, and this is one of the motivations for traveling. For Iran ecotourism lovers, camping and having a couple of days by the sea, and living like a primitive is like a dream. Just have to have enough camping gear with you, things like tents, cookies, dishes, and cooking utensils.

Hormuz island is full of cliffs and may be crazy to camp on one of them, but you should be careful if you choose small islands around Hormuz for camping, be sure to bring enough water and food with you because there's no supermarket and local houses there.

And as another Iran travel guide for camping in Hormuz island, if you want to camp near the sea, be careful to distance enough from it because half the nights the water is rising due to tides, and if your tent is near the sea, water may enter your tent or the sound of waves won’t let you sleep.

What to eat on Hormuz island red beach

There is only some delicatessen in Hormuz island, which sells Felafel and Samosa but you have other choices too. For example, you can order food for local people. Qaliyeh Mahi is one of the most popular foods on the island because they made it there with fresh fish. You can also eat it in local restaurants or even cook by yourself.

What to do on Hormuz island?

Hormuz itself is an attractive island, so you do not need to go to certain places to visit its landmarks.

Also, its red soil, is considered an Iranian souvenir and is used by locals as a spice of food and bread, and has a cosmetic application too. Being near the sea, despite the rocks that are visible for only a few hours and then they go underwater, is one of Hormuz's island attractions.

During the day, you can ride on three-wheel engines and explore the island, or go to the salt goddess cave, visit the Portuguese fortress, which is more beautiful than the Portuguese castle of Qeshm.

You can also visit the seven-colored mountains in Hormuz island, or see the Valley of the Statues where its rocks and corridors are in the shape of the animals, and pass through narrow corridors and reach the abyss to astonish at its height. 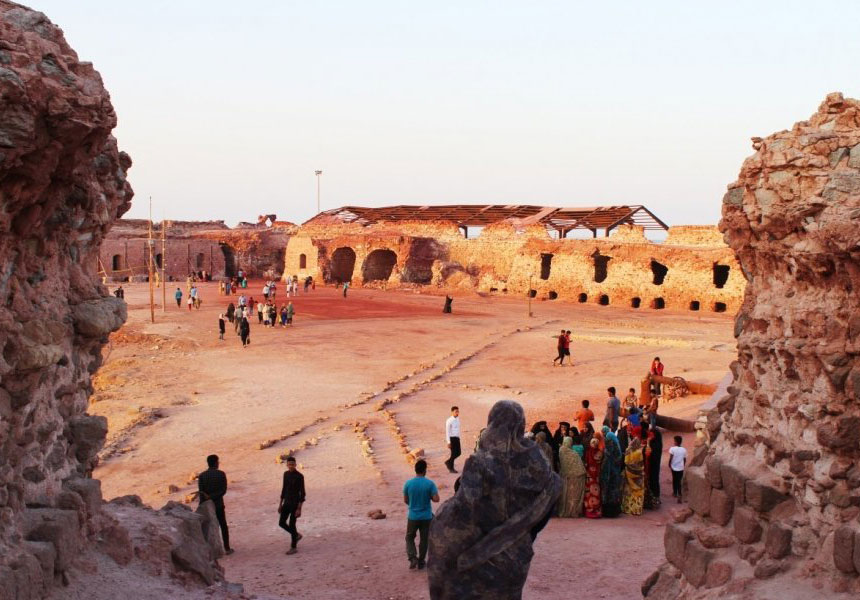 This is the famous Strait of Hormuz, a point at the edge of the abyss where you can watch ships moving down there.

Hormuz island is indeed a pristine island, but in some places, it is more secretive.

Like the environment beach, Mofanaq Island, which is 40 minutes away from the village, and places like seven trees. All of this can make your day and at night you can see a lot of phytoplankton that have lightened the beach.