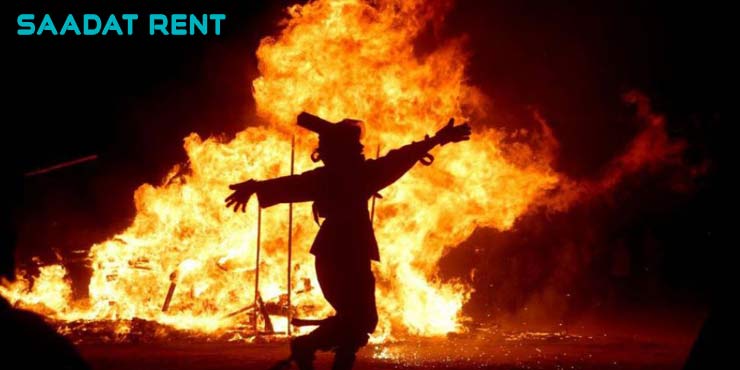 Iranian people like the other ancient nations have their own customs and traditions. One of our new year ritual, is the "Chaharshanbe Suri"

Everything you should know about Chaharshanbe Suri

Iranian people like the other ancient nations have their customs and traditions. One of our new year rituals, which should be a mixture of several different traditions, is the "Chaharshanbe Suri" which in some cities is called the last Wednesday of the year.

In this paragraph I should mention two points for you; first, Iranian people celebrate the new solar year that begins on the first day of spring, and also Chaharhanbe which means Wednesday. So I think now you get the point that why some people call Cahahrshanbe Suri the last Wednesday of the year.

But why do we celebrate the last Wednesday of the year? What is so special about this day? Stay with us to find it out.

Chaharshanbe Suri in the Iranian Calendar

Well, first let’s start with the Iranian calendar. In the ancient calendar of Iran, each year was 12 months and each month was 30 days. With this in view, the length of the year was practically 360 days, which only had 5 days and some hours difference with a full solar year. People in this time we're ready to welcome the New Year or Nowruz, by cleaning their houses that we call “Khane Tekani”.

The history of ancient Iran is full of celebrations, all based on the vision of the ancients, with the philosophy and essence of existence. Today, Chaharshanbe Suri is one of few celebrations that has remained till now in Iran and has an important position in Iran tourism that every year, many tourists travel to Iran to see this celebration.

The fire in Iranian culture is a symbol of purity, refreshing, constructive, living, well-being, and, in the end, the most visible symbol of God on earth. Chaharshanbe Suri in Persian language culture is also known as the introduction to New Year's Eve.

It is also known throughout history, before the coming of the New Year and Nowruz, which is still of great importance among the ethnic groups and citizens of Iran.

We do not find any books or historical documents, or any references, about Chaharshanbeh Suri, and only in this recent century, or more precisely, in this past half-century, there have been numerous articles published about Chaharshnbe Suri or in the writings Related to them talked about this day.

Of course, it is not worth mentioning that despite the dating of this celebration, in the ancient history of this country, even though it has been mentioned in the Shahnameh of Ferdowsi (Read more about him in this article: Tomb of Ferdowsi; the Iranian poet ), Chaharshnabe Suri tradition is not entirely related to the Zoroastrians because they believed that jumping from the top of fire is bad, mischievous, and unfriendly.

everyone, old and young, men and women jump from the top of the fire flames and they say, "Zardi-e Man Az To, Sorkhi-e To Az man," so they gave all of their sadness and problems of last year to fire and start the new year with joy and comfort. but let’s look back to that special Persian sentence that I mentioned. what does it mean?

This sentence represents a ritual cleansing ceremony in which also "Suri" means "red" or Sorkh in Farsi and Chaharshnbe Suri refers to it. In other words, people are demanding that the fire takes all of their yellowing (Yellow = Zard in Farsi), their illness, and their problems, and instead give them redness warmth, and power.

As people used the pottery dishes in houses like bowls, plates, and jars, they rolled out old pottery from the roof of the that was filled with water and a few coins.

"Ghashoq Zani" (usually women cover themselves and knock on the doors with a spoon or key, the owner of the houses gives them sweets, fruits, or money) is also from the traditions and customs that have not yet been completely forgotten in Chaharshanbe Suri.

There are many myths about Chaharshanbe Suri, and even in some of these myths, it is said that the owl's singing is also because of Nowruz.

Ancient Persians believed that the old year sadness and pollution should not be delivered to Nowruz and new year, and because cleaning all of this pollution wasn’t possible with water, besides water, they used the fire element for cleaning too and by burning firewood, they remove unusable appliances and disinfect their living space.

In addition to flooding with smoke, it was used to eliminate insects, which were considered as a kind of cleaning house.

All the rituals and memories that the Iranian people celebrated at various times, and some of them that remained in the culture of this land, has been mixed with the manners, ethics, and wisdom of our ancestors, and in all of them, the belief in the God, Life expectancy, the battle with the demons and the evil were included in the form of various symbols, displays, and various dramatic rituals.

Lighting, the use of monasteries, fireworks, waterfalls, and ... have made the Chaharshanbe Suri a new form and different from the past. Rainbow lights are visible on each side and there are cascades of fire sparks. Unfortunately, today, Chaharshanbe Suri has changed its affluent affiliations, which annually causes personal and financial damage to families in the last days of the year.