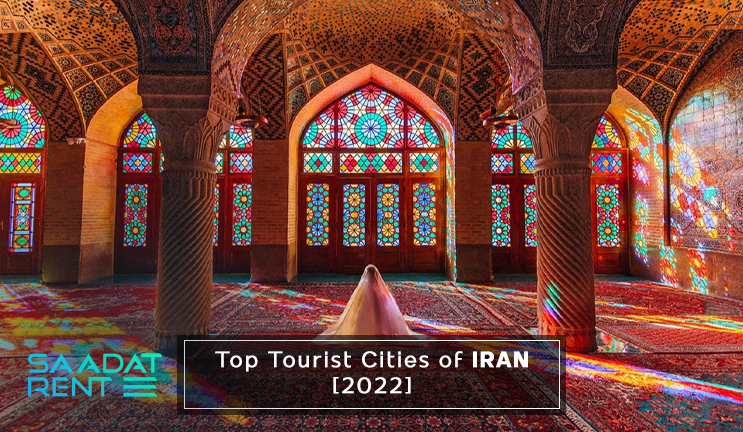 What are the top tourist cities in Iran? if you want to travel to Iran and want to know where to visit first, don't miss this article

What are the most popular tourist cities in Iran?

If you want to travel to Iran, especially for the first time, one of the first things you want to know is what are the top tourist cities of Iran, so you can visit the most unique Iran attractions in your limited time. You can start your journey and adventure from anywhere in Iran. In this article, Saadatrent is going to introduce you to some of the most famous tourist cities of Iran so that you can get familiar with these tourist and very spectacular cities before traveling to Iran. if you also want to know these cities and their eye-catching attractions, stay tuned.

Isfahan, the city of turquoise domes

Undoubtedly, Isfahan is one of the top tourist cities of Iran and also one of the largest historical cities in Iran. This beautiful city is also known as half of the world because Isfahan with five thousand historical monuments and places that belong to thousands of years deserves this title. The largest square of this city called Naghsh-e Jahan with 565 meters in length and 170 meters in width is one of the largest squares in the world. you should dedicate a few days to visiting this top tourist city of Iran because there are ancient monuments to see everywhere in this city.

The attractions of Isfahan are so many that some of them may be missed, but the most important ones of Isfahan are Naghsh-e Jahan Square, Si-o-se pol bridge, Khajou Bridge, Ali Qapu Mansion, Sheikh Lotfollah Mosque, Imam Mosque, Hasht Behesht garden, Chehel Sotoun, Isfahan Grand Mosque or Jame Mosque, Chaharbagh School, Atashgah, Bird Garden, Flower Garden and many other sights, each of which is a sign of the history and culture of this beautiful city.

Shiraz, the capital of Iranian culture and literature

Shiraz is one of the top tourist cities of Iran that all tourists will choose to visit. Shiraz is a very beautiful, historical, and even legendary city in Iran that has been the cradle of culture and beauty for a long time. Shiraz can’t be described in words, and if you are a traveler and have traveled to this beautiful city, you will have pleasant travel memories. Shiraz is one of the top five tourist cities in Iran and the tombs of some of the best Iranian writers and poets such as Hafez, Saadi, Khajavi Kermani, etc. are located in this city.

Shiraz has a very long list of tourist and historical sights and attractions, but if we want to mention the top attractions of Shiraz, we can mention Persepolis, Pasargadae, Hafeziyeh, Saadiyeh, Shah Cheragh Tomb, Quran Gate, Nasir Al-Molk Mosque, Vakil Mosque, Vakil Bath, Karim Khan Citadel and many other historical and tourist sites.

Tehran, the capital of Iran

When we arrive in Tehran, the first thing that may come to mind is traffic and pollution because it is the most populated city in the country and has been the capital of Iran for more than 200 years. But the hustle and bustle of this city do not cause it to ignore its history and tourist attractions. Tehran is one of the top five tourist destinations in Iran and has many traditional and modern bazaars and shopping malls with a variety of products.

Mashhad, the spiritual capital of Iran

Mashhad is also known as the religious capital of Iran and is the most famous religious tourist city in Iran many Iranian and foreign tourists are eager to see Mashhad and the attractions of this beautiful city. Although Mashhad is known for the holy shrine of Imam Reza, many tourist places introduce some of the sights of Mashhad.

Tabriz, the capital of Islamic tourism in 2018

Tabriz is the third-largest city in Iran and has a special place in the history of our country. Tabriz is a historic city and has many ancient monuments in addition to ancient history and culture, Tabriz is famous for its traditional and modern bazaars and the quality of the goods they offer. The interesting point is that Tabriz has been awarded the title of the world city of carpet weaving by the World Council of Handicrafts due to its unique carpets and rugs.

Yazd, the city of windbreakers

It is impossible to talk about the tourist cities of Iran and forget the name of Yazd. The city of Yazd is the first city in Iran to be named in the UNESCO World Heritage List and is one of the few cities that are still It preserves its traditional texture and immerses tourists in its history and is very suitable for hiking.

The amazing city of Yazd is the first brick city of Iran and the second historical city in the world, and this shows the history of this city. There are many sights in Yazd and you can visit each of them for hours, but some of the attractions of Yazd are Yazd Grand Mosque, Vaqt of-Saat Square, Amir Chakhmaq Square, Dolatabad Garden, Lari House, six windbreaks, Amir Chakhmaq square, Varham Fire Temple, Silent Tower, etc. are just some of the attractions and sights of this amazing and historical city.

Ahwaz, the city of bridges

Ahwaz is one of the unique tourist cities of Iran and can be considered the most famous and popular city of Khuzestan province. This unique city has a diverse climate due to its geographical location. Especially in winter, due to the warm and very pleasant climate, it is a very good and suitable destination for tourists.

Kish, the pearl of the Persian Gulf

The small and of course very beautiful island of Kish shines like a pearl in the Persian Gulf and attracts many tourists every year. Kish Island with an area of ​​90 square kilometers is the most modern Iranian island in the Persian Gulf, and those who are interested in exciting and different entertainment usually choose Kish Island for themselves to create a memorable experience.

If we want to name some of the most attractive sights of Kish, we can go to the ancient city of Harireh, the Greek ship, Mirmahna Beach Park, Marjan Beach, Hur Cottage, Dolphin Park, Bird Garden, Kish Aquarium, Kish Amusement Pier, Kariz Underground City, Do Gonbad and Panj Badgir water storage, Simorgh Beach Park, Kohan Baghloo Village, Kish Fishing Park, Hindurabi Island, Turtle Beach and many other various activities such as diving in Kish, safari or recreation in the theme of Ocean Water Park mentioned that only They are considered as part of Kish entertainment.

Qeshm, the land of the Seven Wonders

Finally, we reach the amazing and unique island of Qeshm, which is one of the most famous islands in our country. Qeshm Island is the largest island in Iran and has a long history of the Sassanid era. This spectacular island with its pristine and beautiful nature has long been a tourist destination for many Iranians and foreign tourists.