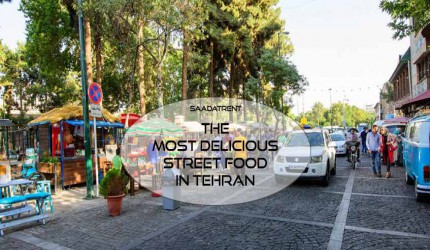 30 Tir street in Tehran Food can be a reason that makes you travel to a country, it may be a reason to fall in love wit...

Food can be a reason that makes you travel to a country, it may be a reason to fall in love with a country, actually, food is a part of every country’s culture. Iran is one of the countries with a high diversity of food due to its diverse culture and climate and it's one of reasons of iran tourism development.

If we put aside all types of restaurants, one of the most fascinating forms of restaurants, are carts and cars that cater food in different streets and often, there are some very interesting options to find out there. This type of food is called street food; an interesting phenomenon in the abdomen that the number of its fans is also highlighted.

These foods are found in some places in the city, but in some places, they take a special street to monitor more food and create a variety of options for individuals. There is also a street in Tehran where you can walk around and enjoy the delicious options in front of you. It doesn’t matter what your taste and what kind of food you are looking for, however, you can find your favorite food on the 30 Tir street.

Now that you are familiar with the street food and its antiquity, we want to go to Delicious Street of Tehran and tell you a little about its atmosphere. This delicious hangout is located on 30 Tir Street, and its dining kiosks begin at the intersection of this street with Imam Khomeini Street, and one after the other they provide food and drink for their visitors. A few steps on this street is enough to make your appetite for eating even if you are not hungry!

30 Tir Street in Tehran starts from the Imam Khomeini street and ends in the garden of the Russian embassy. If you want to go there you should be careful about the trafic plan but if you use car rental in iran services, you won't need to be worrry about it. you can also use the subway. you should go to Imam khomeini station. contemporary historians estimate the age of this street to be 150 years old. The street was constructed right at the time of the Iran constitution, and from the very beginning it was known as Qavam ol-Saltaneh Street; the reason for this naming was the establishment of the house of Qavam ol-Saltaneh, the prime minister of the Imperial times on this street.

Walking in 30 Tir street, it is like walking through the passage of time. A street in the heart of history, sheltering religions, with a view of culture, art, and education, which ends in a pleasing experience of eating delicious food.

30 Tir street is the most unique street in the world. The street has both the church and the mosque, both the synagogue and the fire temple. Religious peace is dominant on this street and smiles to passersby. Synagogue with a blue door, the Saint Peters Church, the museum of Ardak Manoukian Bishop, the Firoz Bahram Temple, and the Prophet Ibrahim Mosque, all of which are alongside the collective life of this street.

This street is not only about the religion, but history is also rocking on this paved street: from the National Museum and Ancient Iran museum to the home of Qavam ol-saltaneh and the first modern hospital in Tehran, Sina hospital, and of course, the Museum of Science and Technology.

Walking in the delicious street of Tehran

Delicious experiences are the main reason that takes people to this street. Here you can find any sweet experience and some special moments.

Cafes: If you're crazy about drinking a cup of coffee or if you like to taste a delicious cake or delicious ice cream, make your way to the 30 Tir street and create a new experience for yourself in a different atmosphere. Cool drinks like Mojito and juices are also found on this street and can give a fresh taste to your journey.

Traditional Cafes: So, you do not like coffee and prefer traditional dishes and syrups? Do not worry, these beverages are also found on 30 Tir Street. From Iranian tea, mixed blend and ingredients and, of course, delicious traditional Iranian syrups.

Fast Food: On this street, fast food markets are so popular; from burgers with different styles of cooking to pizzas, which people end up in a row and stand in long queues for only one piece of them. If you're a fan of these foods, be sure to visit 30 Tir street and pick one of the most different options among your options.

Iranian cuisine: We can’t name this street “the most delicious street of Iran“ without iranian food. You can find many traditional Iranian foods from different parts of Iran.

International foods: Street foods are everywhere in the world, and it's unlikely that some of them will be transferred from one culture to another. You can find a variety of Turkish and Indian snacks in the 30 Tir street and taste the international flavor.

30 Tir street these days, it's experiencing crowded nights. Dozens of car bars and food stores keep the streets alive. The people of Tehran have found a new hangout for fun, and the crowds of the streets at night are so high that they block the streets. The busy night where the passion of life is going on.

The 30 Tir streets are popular with the beauty of nightlife, as well as the nightly music that it's heard. You see many people who come here for fun, walk on the paving stones, try different dishes, and smile alongside each other.

You want to explore more between the landmarks  of tehran around 30 tir street? read these articles about them:

Top 10 Tehran attractions; Where to go in the capital of Iran

Museum of time in Tehran

Top 10 Tehran attractions; Where to go in the capital of Iran