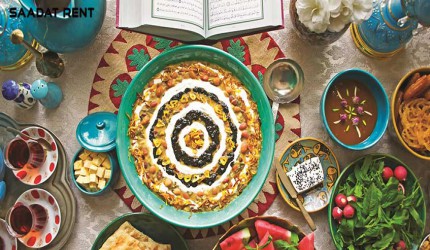 The most delicious food of Ramadan in Iranian cities Due to ethnic diversity, Iran has special local food specialties d...

The most delicious food of Ramadan in Iranian cities

Due to ethnic diversity, Iran has special local food specialties during Ramadan, which is interesting for tourists. If you've raveled to Iran during Ramadan, you will noticed the most famous iranian food and desert that people eat in iftar. Ash, Halim, Shole Zard and of course, Zoolbia and Bamieh are most famous one between them.

Ramadan is one of the lunar months that is important for Muslims. Avoiding eating and drinking during the day is a key feature of this month. In Iran, due to the different ethnic groups throughout the country and the diversity of local traditions this month, various cuisines are prepared, each with a different taste and colors.

A look at the customs of different ethnic groups in Iran shows that the ethnic traditions of the people in Ramadan in the corners of Iran create a beautiful picture. Perhaps many Iranians are still unaware of these great food traditions during Ramadan. So, in this article, we decided to introduce these food traditions, which are among the richest aspects of local culture, in Ramadan as of one iran tourism purposes for tourists from all around the world.

These food traditions exist in most cities in Iran. It is natural that the food of each region of Iran is based on the climate, indigenous customs, and breeding products of the same region, and are now known as the traditions of these regions. This article refers to some locally-made dishes in some parts of Iran.

Reshteh khoshkar from Rasht to Tehran!

Reshteh khoshkar is made of Gilan products, rice. The rice paste, which is placed in a very thin filament with a special funnel, is interconnected to form a thin sheet that is filled with nourishing nutrients such as nutmeg. Rasht people, along with the Reshteh khoshkar, prepare a special porridge using rice to get a liquid and high-quality food at their iftar table.

Mashhad and its tasty Sholeh!

If you have traveled to Mashhad during the month of Ramadan, you are aware of the atmosphere of the city these days. But if you haven’t gone there and didn’t taste the famous Mashhad Sholeh, I’m pretty sure you heard about it. The Mashhadi Sholeh has a lot of fans and it's a lot of words about its unique taste. The fact is that some foods should be eaten at the same place and time to find out all the features that make it special! We also recommend that you take a trip to this city to enjoy tasting this food and also explore in Mashhad attractions.

Another special meal that the Mashhad people provide on the nights of Ramadan and for fasting, is Dighche Mashhadi, which you can eat in most of the restaurants there and also is a famous option for Nazri between locals.

People of Urmia will cook these foods at other times of the year, and if you've traveled to this city before, you will certainly taste this food. Ash-e Doogh is one of the popular foods that is cooked in different places with different styles and methods, but if you want to taste the original version of this delicious Ash, ask it from the people of this city.

Carrot halve are also sweet and nutritious foods that have a lot of fans in Ramadan.

People of Isfahan at all events do not forget about Beriyoni, and the city's restaurants in Ramadan also have this meal in their main menu. Of course, if you want to get some Ash and Halim, then I have to

say that they are also found in this city; Ash-e Shole Qalamkar of Isfahan is the best-selling of Ramadan, along with Lentil Halim, Milk Halim, and even Eggplant Halim.

Again, another Ash! Milk Ash of Tabriz is one of the hot and delicious foods that are cooked for iftar and is like Halim or Ash-e Reshte for the people of Tehran. Of course, we should mention that this food isn’t the milk soup that recently is served in restaurants and has many fans as foreign food.

Ash-e Shir is made from wheat, milk, walnuts, and raisins, and provides a delicious and nutritious dish for fasting for long hours licked by eating and drinking. Of course, besides this, you can also eat candies Ah, Koofteh and Dolme in this month too.

Finally, one of the foods that are almost on all of Iftar tablecloths is the date. Although this gourmet food is a product of the southern cities of the country, because of its natural and energetic sugar, it opens its place on the table of all Iranians and is a companion to all the Iftar tables.

The most delicious food of Ramadan in Iranian cities Due to ethnic diversity, Iran has special loca...

every city and village in Iran certainly has a lot of delicious Iranian food, but we can only mentio...

Top 10 Iranian food | You must try this Iranian cuisine once