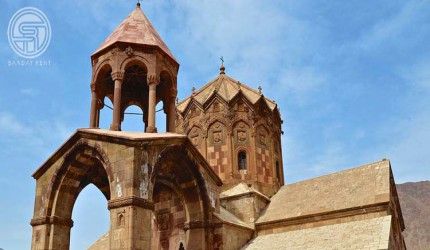 Saint Stepanos Monastery or holy Stepanos is an old church in Jolfa and near the Aras river that its appearance has not changed during the time and is still persist and spectacular. But when this church had built? And what is the story behind building this church? Stay with our iran travel blog to get these answers.

Where is the Saint Stepanos Monastery?

One of the attractions of East Azarbaijan, near Tabriz that has an important place in iran tourism, is Saint Stepanos Monastery that was built on Maghard slope and is also mentioned in Armenian books called by this name, somewhere between the mountains and in the border region between Jolfa and the Republic of Azerbaijan.

If you travel by your car or you use the car rental in iran services, you should reach Tabriz from Qazvin and Zanjan highways. It is less than 2 hours from Tabriz to Jolfa. On the road to Jolfa, you can see the church guide boards.

When you arrive in Jolfa, it is less than half an hour from Julfa to the Saint Stepanos Monastery and about a 300-meter walk from the parking lot to the entrance to the church. This route is uphill and it may not be convenient to go for it for those with walking or heart issues.

Saint Stepanos Monastery was built by Archbishop of Julfa in 1643. It was built in 1655, but later, in 1680, they added a number of sections to it and, over the years, they have repaired it. This church is also registered in UNESCO world heritage site.

In fact, the Saint Stepanos Monastery belongs to the Gregorian branch of Christians, and it is the second most important Armenian church in Iran after St. Thaddeus Monastery. Armenians gather from different cities and countries on August 14th, the day of the martyrdom of one of the apostles of Christ, Thaddaeus in this church.

Why this church is called Saint Stepanos?

In other parts of the world, there are also other Saint Stepanos Monastery or Stephan. The Holy Sepanos is one of the missionaries of Christianity that Apostles performed his inauguration, and was the first Christian martyr that the Jews stoned him.

The artistic architecture of Saint Stepanos Monastery is one of the reasons for its attraction. The architecture, interior decoration, and materials used in its construction are similar to those of the tenth century to the twelfth century, and a combination of the Parthian, Roman, and Urartu styles and it is different from the iranian architecture that you can see in other Iranian famous buildings.

Later, with the construction of several other churches in this style, this style was renowned the Armenian architecture.

The stone fence around Saint Stepanos Monastery is similar to Sassanid fortresses and it has also several guarded towers. At the fence gate of the church, you can see the arcade wooden door, which on its base, an artistic carving from Mary and the Jesus Christ childhood is worked.

There is a large number of these designs and sculptures on the outside and other parts of Saint Stepanos Monastery, which has doubled the beauty of this pink, red, and white monastery.

Inside the Saint Stepanos Monastery

Saint Stepanos Monastery has three main buildings: the main chapel, the bell tower, and Daniel's oven. One of the most beautiful places in this building is its 16-sided dome, which is very artistically designed. Before you go into the main chapel, you can see a carving in front of yourself that built in the Qajar dynasty. At the top of the door, there is an inscription that shows that Abbas Mirza bought this door and dedicated it to the church.

The prayer hall is designed in the form of a cross, with a marble altar that is about a meter high. But here you have to raise your head a little bit to see the main beauty of the Saint Stepanos Monastery on the ceiling of the altar and its walls.

In the south of Saint Stepanos Monastery, there is a two-floor porch that a bell tower is above it, a pyramid and octagonal dome that was restored during Abbas Mirza period. There are several graves in the courtyard of the Tower where prominent Armenians were buried there. This church, unlike other churches, does not have a bell. Italian experts took the bell from here for restoration, but the tower remained empty forever and they did not turn back the bell.

Another main section of the Saint Stepanos Monastery is the Danial Bell, which has several sections, such as the Hall of Fame and the baptism place. This hall is connected to the north wall of the church. The name of this building was taken from Saint Daniel. Daniel's oven is also called Paul's prayer hall.

The Secret of the Yahya dead Body

In 2005, when Saint Stepanos Monastery was restored, many pieces of bones, several pieces of fabric, wax pieces, clay, and Boswellia were found, and according to the Archbishop and the Caliph of Tehran Armenians, these bones probably belonged to Yahya.

Kandovan Ancient Rocky Village Kandovan village is one of the most beautiful, unique and effective...

Tabriz El goli is the most popular and famous tourist attraction in Tabriz. Different sightseeing pl...

Travel to Tabriz; attractions, things to do and travel guide

Bazaar of Tabriz; the sympol of greatness in the city