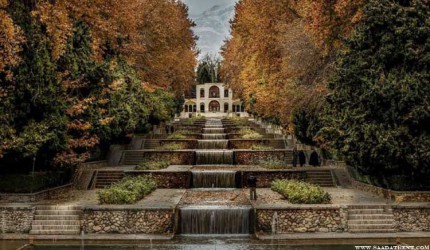 Shazdeh Mahan garden includes a tall wall, a pool and a jumper leading to a large mansion with thick trees are one of th...

Shazdeh Mahan garden includes a tall wall, a pool and a jumper leading to a large mansion with thick trees are one of the things that make up the Iranian gardens in general. The history of this style of gardens dates back to the Achaemenid era and the reign of Great Cyrus.

Regular geometry was established in the garden around the palaces on the orders of Great Cyrus , which later evolved from the architecture of the Sassanid Empire and pre-Islamic periods, and as we see it today. The Magnificent Shazdeh Mahan Garden is also built in such a way to show the Iranian art again.

Shazdeh Mahan Garden is located 2 km from Mahan city and around Kerman city. The garden, which dates back to the Qajar dynasty, is built on the slopes of the Tigran Mountains to enjoy the beautiful nature in addition to the pleasant weather.

"Mohammad Hassan Khan Sardar Iravani" The ruler of Kerman initially ordered the construction of this garden. Later, the gardens were built halfway by the next ruler Abdulhamid Mirza Naserdullah.

If you visit the garden, you will find that some of its parts lack decorative and elegant work, which is why this half-way is to get rid of it. The thing that is quite clear when watching a garden is the contradiction that its lush environment has a dry environment outside its walls. This garden looks like a beautiful piece of the desert, and this is what added to its charm.

The Shazdeh Mahan Garden, with an area of about 5.5 hectares, is located in two eastern and western complexes and is considered one of the most beautiful Iranian gardens. The length of the garden is 407 and its width is 122 meters. At the front entrance you will see the beautiful porch of the garden. It looks like a picture frame that portrays mansions, pools, fountains and garden trees. The basement or the main building is at the top of the garden, courtyard, mansion and baths of the garden.

Today, this eye-catching garden is in addition to preserving historical values and architecture as a promenade and incorporating facilities such as the hotel and restaurant. The reputation and popularity of this garden is so much that many people prefer to celebrate new year event in Iranian culture here. This masterpiece of architecture is one of the UNESCO World Heritage Sites.

One of the hallmarks of Shazdeh Mahan Garden is the presence of waterfalls and fountains, the flow of water in the vertical and horizontal levels, and the use of the slope of the ground for water guidance, which is used by Shrewd architects and artists. These fountains are very cleverly built and are only active on the basis of height difference, slope application and no other force. In this system, the jars are used which, as a result of joining together, can play a role like building pipes.

Flowing water flows through the gardens inside these jars until it reaches one of the jars that play the role of the knee in modern plumbing systems and then erupts from the outside. The dance of the fountains is among the most spectacular and fascinating parts of the Prince's Garden, which can be considered as one of the most beautiful fountains of Iranian gardens.

A large number of these fountains are located in the Shazdeh Mahan Garden, and there are fewer gardens that can fit this number of fountains. An interesting point is that the samples of the fountains in the two original basins are less visible in Iranian gardens, and most likely, they come from the recognition of European gardens and springs.

The magnificence of architectural art in the Shazdeh Mahan Garden

Shazdeh Mahan Garden is an example of an Iranian flat garden (flat and stepped gardens) in a 407-by-122-meter-wide plot covering an area of 7.5 hectares. At the entrance to the garden, you will see an image of the mansion, the fountain and the trees, which is like a beautiful photo frame. On the upper floor there are rooms for living.

The Shah's branch is now run as a restaurant by the private sector, which, of course, has also brought protests from UNESCO. The structure of the bridges leading to the mansion, along with water fountains and terracotta trees that create a variety of harmonies in different chapters, have provided beautiful beauty to the garden, which can only be seen by closely seeing its effect. Shazdeh Mahan Garden was restored in 1979, but unfortunately in the year 1360 a damage occurred due to the earthquake, which was rebuilt again. However, it is well protected today.