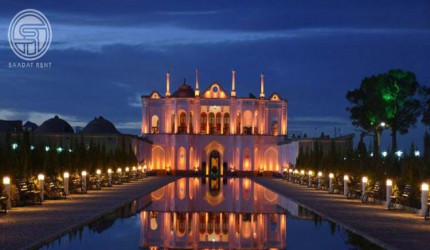 Fath abad garden is one of the most sophisticated and most visited places as an iran tourism attraction. Kerman has about 7,000 valuable historical attractions, including 700 of which are listed on the national monuments list.

But we intend to focus on the most significant of these iran tourism attractions, Fath abad garden, which belongs to the Qajar period and is located 25 km from Kerman city and located in the Ekhtiar Abad village. Do not miss this article.

Fath abad garden is one of the most valuable Iran gardens. As you know, the Iranian garden model is one of the achievements of Iran in international societies and Iran is full of beautiful gardens that can be seen in the city.

Iranian gardens plan can be seen in the Iranian traditional carpet design. Four gardens of Cyrus and miniaturists that water flows from one central pool to the four sides are examples of ancient Iranian gardens.

Conquering the role of water on land ownership and crystallization of available water is the determination of the garden boundaries. The final formation of the Iranian Garden, Achaemenid and four Gardens of Cyrus and Sassanid gardens, and the central role of the pond is considered as an ancient Iranian gardens plan.

In Fath abad garden, the pond in front of the mansion has the same characteristics and the role of water in the formation of the garden has been very effective so that the lack of it had led to the destruction of the garden and its mansion before its rebuilding.

Fath abad garden, which is also called the Biglar Beygi garden, is a beautiful garden, which was built by one of the rulers of Kerman, in 1255 solar year (SH). This historic garden was one of the oldest gardens in Iran and, which was gradually forgotten and became ruinous.

The passage of the aqueduct in the middle of this magnificent Fath abad garden and the existence of different mansions, towers, and the rainforest make here a beautiful and fun place.

You can read about its story in this article: Alamut Castle

A large pond with an area of approximately 60 meters is at the beginning of your entrance to Fath abad garden and reflects of the main mansion in the pond water attracts all tourists who visit Kerman in their iran tours.

The Fath abad garden is made from the Shazdeh Mahan Garden pattern and is very famous for its magnificent lighting during the night. So note that it is a good time to visit the Fath abad garden both at night and in the evenings. This garden is one of the best and largest gardens of medicinal plants patrol in Iran.

In the Fath abad garden, there are some facilities for visitors which we are going to introduce here.

In Café and tea house of Fath abad garden, a variety of herbal essences, medicinal plants and aromatic herbs and also tea, juice and ice cream are served. also, several chairs are set in a garden that allow tourists to enjoy the view of Fath abad garden.

When you are walking in the Fath abad garden area, you will encounter a number of wooden resorts and alcoves that you can rest there.

A part of the Fath abad garden is also dedicated to handicraft shops, in which you can buy handicrafts and iranian souvenirs.

the Fath abad garden is one of the poles of medicinal plant cultivation, and as a result, there is a place to buy these types of plants and other herbal products for medical and therapeutic purposes.

Shazdeh Mahan garden includes a tall wall, a pool and a jumper leading to a large mansion with thick...

Kerman is one of the most beautiful cities in Iran that has many historical monuments. In this secti...

travel to Kerman; a city in the heart of Iran