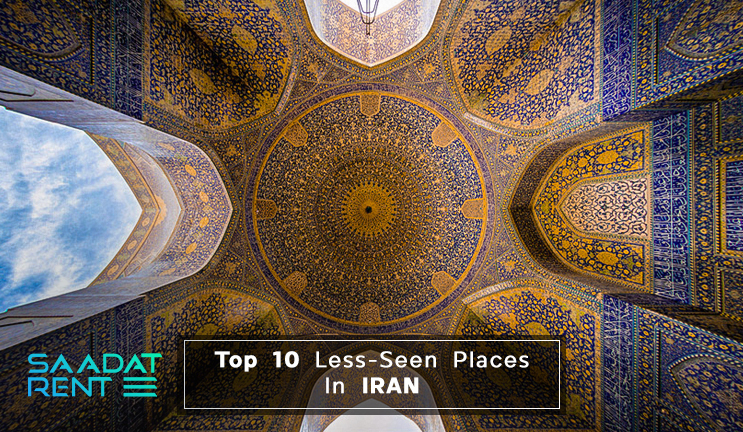 Nashtifan mills are one of the beautiful attractions of Nashtifan village. Nashtifan is located southeast of Khaf in Khorasan Razavi province. The city is famous for its old windmills. The monsoon winds of the Sistan region, which last for about 120 days every year, have created a special opportunity for the creation of unique windmills in this city. The structure of Nashtifan windmills has a special architecture and isn't similar to other windmills that work in rotation. in other words, they don't have circular blades and they don't rotate in a circle around their center. Neshtifan windmills were built in an upright shape and their blades are connected vertically around the axis of shaped wooden cylinders with a simple structure to the lower floor and on the stones of the mill.

We all know Shiraz as a city of poetry, the scent of orange spring, rich architecture, and its colorful glass mosques. If you see the pink color of Maharloo Lake in Shiraz for the first time, you will ask if this lake is located in Australia or other countries. Maharloo Lake in Shiraz is not only one of the most attractive lakes in Iran, but also its most beautiful form, which has given another effect to the nature of Iran and has somehow made us not look outside to see such wonders. The beauty of this pink lake is such that one of the tourist destinations for foreign travelers is Maharloo Lake in Shiraz, which they can see with a relatively long and short trip.

Pamanar is one of the villages of Dezful in the south of Khuzestan. The diversity of wildlife and plants of Pamanar and the lake, which is collected from the water of Dez Dam, provides a great space for traveling and sightseeing. Jumping into the lake and diving into the water is another tempting part of a trip to Pamanar. Of course, if your trip to Pamanar is in the winter, such an idea is not practical. The water of the lake is cold in the winters of Pamanar.

The dreamy silence and the sky of Pamanar reduce your tiredness and worries to zero percent like a sedative pill. If you go to Pamanar in spring, you will see tulip flowers growing around the lake. Isn't it attractive? ‌ Isn't all this enough to put this village on the list of the most spectacular places in Iran?

Until the end of the Qajar period, Karshahi Castle was considered one of the castles where infamous groups of thieves organized their activities. This brick castle has five watchtowers and when you visit it, you can easily imagine how glorious it was in its days. Karshahi Castle, also known as the Castle of Thieves, is located in the city of Abuzidabad in Isfahan province. Below this fort, paths and labyrinths were built that led to the mountains behind the building. In the deserts around Karshahi Castle, beautiful pomegranate trees tempt any tourist to pitch a tent next to them and around the castle. If you like to sleep in nature and camp, you will surely like lying on the desert floor and staring at the starry night sky. Karshahi Castle is an ideal choice for those who are looking for the most spectacular places in Iran and discovering special and less-seen places in Iran.

The beautiful Filband in Mazandaran province allows you to accompany and talk to the stars on the clouds. Filband is a village in Babol. This village, which is one of the most spectacular places in Iran and is not as famous as Kelardasht, Namakabroud, and other popular places in the north, offers you a unique view of rural life. Seeing the villagers working and living in the middle of the white and hot clouds reminds you of cartoons like Heidi from the sixties. The lush hills of Philband and its country cottages are a vital opportunity to escape the hustle and bustle of city life.

There are many spectacular waterfalls in Iran. But if you have never heard of Raghz Strait in Fars province, we must say that you have missed the opportunity to get acquainted with one of the most interesting. Ragaz Canyon is like a hidden paradise in the mountains of the south of Fars province. In the Fasarud region of the province, the mysterious Strait of Raghaz with its high waterfalls awaits those who enjoy adventurous travel.

It does not matter if you are a professional and you go to the heart of the canyon or you will be more cautious and you will go sightseeing around the mouth of the canyon; In any case, one of your most "unforgettable" memories and travels will be to one of the most spectacular places in Iran.

Khuzestan is very attractive in the list of the least visited places. In addition to the Pamanar mentioned, Shadegan ponds in this province are also one of the most beautiful places in Iran, which shows the diversity of Iranian geography and culture. The life of the Shadegan people, who speak Arabic, is based on the production of meat and dairy products. Of course, tourism is also one of their sources of income that cannot be relied on much.

Boating in Shadegan ponds is like exploring an exciting 3D movie. Because while you are enjoying the calm and pristine atmosphere of the lagoon, a buffalo may decide to accompany your boat or one or more migratory birds will break the silence of the lagoon. Around the lagoon are houses with round roofs made of straw and natural materials. Shadegan ponds are undoubtedly one of the pristine places in Iran.

Do you watch horror movies? Do you like fairy tales? If the answer is yes, you are probably a buyer of the stories that surround the Kal Jeni Valley. This mysterious valley is located in Tabas in South Khorasan Province. Water flow and erosion over the centuries have given rise to Kal Jeni Valley. The shape of the valley is such that it becomes a little difficult to believe its gradual and natural formation.

This is why some claim that goblins throw pebbles at the area on windy and stormy days, creating the shape of a valley. But if you are a logician and you are one of those people who do not fear even watching a moving movie in a dark and secluded house, you should look for other reasons to form this strange valley.

For example, the hypothesis that in ancient times, a turbulent river was flowing in this area, and due to floods and erosion, the valley's high walls have reached this shape will be interesting to you.

Haft Ghar Valley is one of the masterpieces of nature. This valley, which is located in the northwest of Neishabour, includes seven valleys that will lead you to a natural spring. The climate of Haft Ghar Valley is very pleasant and favorable. In spring, it rains a lot in this area and because of this, you will face lush landscapes and springs.

The valleys of Haft Ghar are red and beautiful, and of course, there is no cave in this area. Instead, you are facing valleys known as the Seven Caves. The soil of this region is made of Ross soil and its natural spring water is cool and palatable. Neighbor, despite its historical and natural monuments, is one of the most spectacular places in Iran that you should not forget while touring Iran.

Back-broken trees in swampy, often foggy lakes; If you are into horror cinema, the description of this scene will undoubtedly remind you of one of the film sequences in the horror genre. But this view is a description of the lake of ghosts near Nowshahr, Mazandaran province. These days, ghost stories and ghosts are no longer popular among people. The kinds of wars and crimes that mankind has committed on this planet

It no longer leaves room for fear of the jinn and the spirit. But the ancients, the inhabitants of the lake of ghosts, believed that this place was enchanted and enchanted. In any case, the trees inside the swamp and its surroundings create special and interesting landscapes that can be seen to mean visiting one of the most spectacular places in Iran.