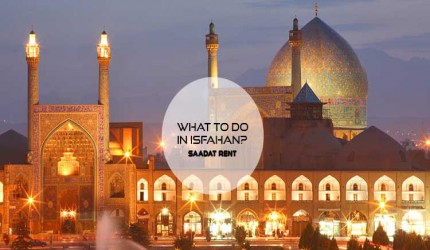 Explore Isfahan attractions like a local! Here we are again with the most beautiful city of Iran and the most important...

Here we are again with the most beautiful city of Iran and the most important one in iran tourism. A city that is called the half of the world. Isfahan. Isfahan with many historical and natural Isfahan attractions and its pristine nature, every year is hosting the tourists from all around the world.

Isfahan is so popular that anyone who decided to travel to Iran, the first name that will search on the internet is Isfahan. With a little surfing on the internet, you can collect the name of all the Isfahan attractions of this city with their stories and histories. You may ask what is going to make this article different from the others?

And the answer is; in this article we are not going to tell you what to visit between Isfahan attractions, but we are going to tell you to what to do in Isfahan. And all these recommendations are collected by local people of this amazing city. So, get ready to explore Isfahan like a local. Stay with us.

Naqsh-e Jahan; the pride of half of the world

It is impossible if anyone takes an iran tour, travels to Isfahan and not visit the Naqsh-e Jahan square. A square that every side of it will catch your eyes. From Imam mosque and Sheikh Lotfollah mosque to Ali Qapu and Qeysariyeh and the beautiful restaurants and cafes around the Naqsh-e Jahan square. You can add the gift shops and the bazaar. All these Isfahan attractions collected around this square to make a great day for all its guests.

If you like, after visiting Isfahan attractions, you can buy iranian souvenirs from Isfahan for your friends and family. There are more than 200 stores on 2 floors around the Naqsh-e Jahan square that are the best places for buying Isfahan handicrafts. If you don’t know what to buy from Isfahan, read this article: Isfahan souvenirs and handicrafts

All tourists who travel to Isfahan from the southern parts of the city, first of all, they see the Soffeh mountains. A mountain that is very popular between people of Isfahan and we recommend you if you want to experience a good day in the pristine nature of this city, don’t lose your chance to visit this place between Isfahan attractions.

Climbing the summit and a delicious breakfast on the mountainside of Soffeh can make a different and memorable day for you. Also, do not forget that the telecabin, bowling, billiards and restaurants in the Soffeh mountain are available for everyone.

A picnic on the Soffeh mountain can be a fantastic choice as one of Isfahan attractions, although new sports and recreational attractions can double this happiness.

Hasht Behesht in a breathtaking garden

One of its doors is located at Chaharbaq Street and the other door at the entrance of Hasht Behesht garden, and its architectural style is Esfahani style.

This beautiful palace with its unique iranian architecture and its beautiful Mogharnas and its entrances is so remarkable that Andrey Gedar, the archaeologist and Iranianologist says: "... The Hasht Behesht palace with a section that opens from every side and with its four pavilions in its four corners, it still retains the original and concise combination of the grace of the past. "

If you would like to know more about the man-made beauties, put Hasht Behesht asone of Isfahan attractions in your itinerary, where the people of Isfahan are welcoming you, surely when you visit this garden, you don’t want to leave it.

In the past, Menar Jonban, one of Isfahan attractions, was separated from the city and was located in a village called Carladan, but today it is located in Isfahan and is near the Nasr Abad neighborhood.

This building is decorated with azure tiles in the shape of a four-wing star and other shapes with turquoise color, and the interesting thing about this monument between Isfahan attractions is that by moving a minaret, not only another minaret move but also the entire building It's shaking.

Of course, the reason for this subject is still questioned by scientists, but, of course, if you would like to know this Menar Jonban, as one of Isfahan attractions, how is shaking, go to this place. At certain times, a representative of the building shakes one of the minarets so that the other moves and the audience can see it.

The fire temple of Isfahan and a delicious Kebab

Along the street path where the Menar Jonban is located, there is the fire temple of Isfahan on the beautiful mountain as the relic of ancient times. Isfahan Fire Temple or the Mount of Fire temple is one of the Isfahan attractions. This complex has an ancient historical background and has been used for different reasons in diverse times.

This mountain is located in the west of Isfahan and 8 km to the center of the city on the Atashgah street and is located on a mountain near the ZayandehRud River. From the top of this hill, up to a mile from the four main sides can be seen well. This is the oldest monument in Isfahan with a history of more than 7,000 years old. If you want to spend a half a day outside Isfahan, be sure to set this beautiful view and visit here as one of Isfahan attractions.

The romantic neighborhood of Jolfa

The Armenian neighborhood of Isfahan is more famous because of coffee shops instead of its old and beautiful texture. Jolfa has five large streets from the east to the west. A good bazaar with several bathrooms and two caravanserai and a square and eleven churches are some of Isfahan attractions that are located here.

Having a romantic evening and visiting the alley, the streets that are still full of people in the evenings can make a memorable experience for couples and tourists. If you like to sit in the coffee shops and spend your hours by drinking coffee and watching the old buildings around you, do not miss visiting this neighborhood.

It is so beautiful and lovely that anyone traveling to Isfahan can deny this recommendation to spend a couple of hours beside the river and its beautiful bridges, especially now that the water has returned to this river and again brings the people of Isfahan and around the world together to drink tea and enjoy the intimate surroundings.

Si o Se pol along with Khaju Bridge, Marnan, and other dozens of other bridges, made Zayandehrud Isfahan is one of the most beautiful Isfahan attractions.

Read about some of Isfahan attractions:

Vank Cathedral; the most Important church in Isfahan