Top 10 Tehran Attractions - What is famous in Iran? | Saadatrent 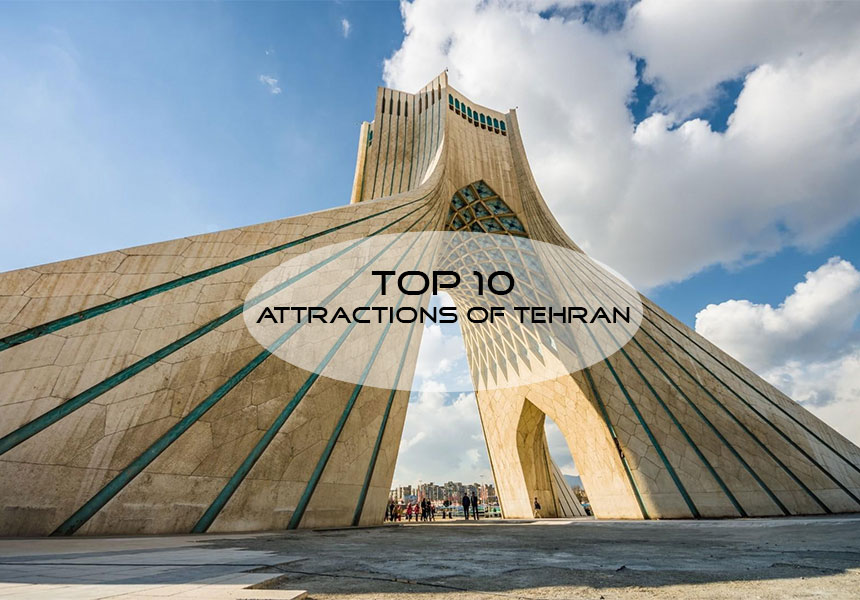 Iran tourist attractions - What is famous in Iran?

Top 10 Tehran attractions include things you should do and see in Tehran as a part of Iran's tourist attractions. The metropolis of Tehran has many monuments, Iran tourist attractions, and many recreation places, so some of its most important tourist spots may be hidden from the eye or lost in the bustle of its streets. That's why we decide to talk about the cultural attractions in Iran and what is famous in Iran in this Iran travel blog. Stay with us to see the spectacular sights of Tehran and get acquainted with some of the great attractions in Tehran.

What is famous in Iran?

Most of Tehran's passengers travel to this city for business and office work, or they just arrive in Tehran and start their trip from here and most of them do not know, that the spectacular places of Tehran are like a treasure in the city. they usually see Tehran only as their arrival destination. now let's read more about Iran's tourist attractions of Tehran and see what is famous in Iran.

The only attraction in Tehran that is registered on the UNESCO World Heritage Site is Golestan Palace, the palace of the murdered king, Nasir al-Din Shah Qajar, which displays the festival of magnificence and majesty in Iranian Islamic architecture for the public and foreign tourists.

Golestan Palace is the most famous destination for international tourism in the capital. Every month, special events are held in this palace and every day there are thousands of tourists from different parts of Iran and the world visit this great tourist destination on their Iran tour.

If you are planning to visit Nasiriy photography house or visit have lunch in its traditional restaurant, visit the museums and paintings that were awarded to the Qajar dynasty, or take a selfie with the famous Shamsol Emareh building, do not forget to visit Golestan Palace.

You can read more about this palace at this link: Golestan Palace Museums in the Capital of Iran

One of the most prominent places in Tehran, which can turn a holiday into a memorable day, is the Saadabad complex. The cultural and historical complex of Saadabad is a collection of palaces of the Pahlavi family, built-in Darband, one of the most opulent areas in Tehran.

The complex has about 180 hectares of natural forest, sight shade, qanat, garden plant, greenhouse, etc. It has seen four historical periods of Qajar, Pahlavi I, Pahlavi II, and after the Islamic Revolution. After the victory of the revolution in 1357, this collection became a museum.

You can read more about this attraction here: Saadabad historical complex

The Niavaran Palace, like Golestan Palace, is the No. 1 destination for tourists in Tehran. It is impossible that a foreign tourist would travel to Iran and would not visit the most famous contemporary palace in Tehran, which was once the residence of the first and second Pahlavi, during his stay in Tehran.

The Niavaran Palace is a good choice, even for those who like to trekking in northern Tehran under rough terraced trees.

Niavaran Palace, these days is a collection of museums and galleries and various tourist opportunities. Today, parts of the Niavaran Palace are at the disposal of the President to welcome the official heads of state in Tehran.

Nature Bridge is one of the newest tourist destinations in Tehran, such as Jurassic Park and the Persian Gulf Lake, and is very attractive to domestic and foreign tourists. Tehran's 270-meter bridge connects Ab o Atash and Taleghani gardens.

The bridge of nature, like the Meshginshahr suspension bridge of Ardebil, should be considered one of the most attractive tourist destinations in the country. This bridge is the largest non-automotive two-floor wooden bridge in Iran, attracting many tourists due to its attractive lighting conditions.

All types of Iranian and foreign restaurants, cafes, and services are available to tourists.

From past to the present, many people know Tehran with the Azadi tower or "Azadi Square"; a fair that was built in 1949 and is the first building to be seen by the passengers of the western roads of Tehran due to the entrance to the western entrance of the city and also to the West Passenger Terminal.

In this collection, we can visit the Iranian Hall of Fame, the Passage of the Ancients, the Ancient Hall, and the Mirror hall.

The current treasury of the Iranian National Jewish Museum is one of the most fascinating places in Tehran and Iran! In this museum, royal jewelry related to the Safavid, Afshar, Qajar, and Pahlavi periods; famous jewels such as "Kooh-I Noor Diamond", "Farah Pahlavi" crown, "Kiyani" crown, "The Jeweled ord", "Takht-e Tavoos", "Naderi’s seat" and ... is waiting for you in this museum.

The Iranian National Jewels Museum is currently available to the Central Bank of the Islamic Republic as a treasury.

The experience of excursion in markets and bazaars is one of the most enjoyable experiences you can have in any city. But the Tajrish Bazaar can be considered the most tourist-friendly trade point in Tehran. Even if you do not plan to buy anything, you should also visit this part of the city, But why?

You will be enthralled to witness the colors and beauty of the cuisine in the Bazaar, in addition to the attractiveness of the antique architecture and dome-shaped chambers of this market. This market is a display of fresh, elegant, and timelessly presented meals, vegetables, and fruits. Additionally, you may purchase Iranian goods including pottery, cashmere, and copper vessels.

Darband is an old village in Shemiran and one of the sights of Tehran, located in the northern garden of the Saadabad complex. Darband is one of Tehran's most spectacular attractions due to its cool summers. The river of Darband flows through this village.

This region marks the start of the trek to the mountain resort of the Tochal Mountains. Teletubbies are suggested for individuals who are not interested in climbing. This route's beginning is densely packed with tiny cafés and eateries. These restaurants are quite popular and are generally very busy, especially at night.

If you are looking for a chance to escape the crowds and pollution of Tehran and relax in the heart of nature on the traditional beds in the restaurant, it's a good choice.

Valiasr street is the most important street in Tehran and one of the most beautiful streets in the world. The length of this street is about 18 km and in different periods of history, it was always among the first list of Tehran sights.

Historical books, for example, say that the north of Valiasr Street was the promenade of the family of the Qajar kings. One of the reasons for this popularity is the age-old trees that have created an amazing view from the beginning of the street construction to the present.

This street connects the northernmost and southernmost points of Tehran. Railroad Square and Tajrish Square is the final destination of Valiasr Street. This street can be considered the center of Tehran's art galleries and cafes.

The following major tourist attraction in Tehran is completely unknown to both Iranians and international visitors. This place is only known to seasoned Tehran visitors. The Moghaddam mansion and museum in Tehran is the most expensive house in the world. The artworks on display are expensive.

have given such a high-profile title to Tehran. The Moghaddam Museum depicts 7 as a part of the life and works of one of the well-known figures of Iranian literature and culture and is considered a spectacle of the capital.

This museum contains everything from stone carvings to coins and medals to exquisite books, and its architecture is reminiscent of the historic palaces of Tabriz, Kashan, and Isfahan. We are familiar with the collection of exquisite fabrics, pottery, glasses, and knitted fabrics in this house.

The cultural attractions in Iran are well-known. The tourist sector in Iran has enormous growth and expansion potential. This nation is renowned for having produced illustrious civilizations, cultures, and architectural styles. Compared to the top 10, Iran has more UNESCO World Heritage Sites. We discussed a few of Iran's most significant cultural sites in this piece. Among Iran's most well-known cultural landmarks are Persepolis, Naqsh-e Jahan Square, and Golestan Palace. You should definitely make at least one trip to Iran's cultural sites.